When I first read through the clues I thought that this was going to be one of Giovanni’s more testing puzzles but once I’d established a bridgehead it all flowed fairly smoothly.
Let us know how you fared. If a hint is not good enough to lead you to the answer you can cheat by highlighting the gap between the curly brackets under the clue.

1a  Next door to busy person, actor James staying in (6)
{BESIDE} – James here is not, as the setter would like you to think, a forename but a surname. Put his first name inside (staying in) a metaphor for a busy person.

4a  After service sister is full of love, such is music (4,4)
{MASS NOUN} – this is a term for things, like music, which cannot be counted and which have no plural. A church service is followed by the sort of sister who belongs to a religious order with the letter that resembles zero or love inside.

9a  This person is about to enter academic field (6)
{DOMAIN} – ‘this person’ is the setter so we want how the setter would say ‘he is’ in the first person (1,2). Reverse it (about) and enter it in a senior academic.

11a  Plant wolf maybe knocked over jumping across ancient river (9)
{GOLDENROD} – reverse (knocked over) what a wolf is an example of and insert in it (jumping across) an archaic word meaning ancient and R(iver).

13a  Musician gets casual break before start of term (5)
{HOLST} – a casual way of describing a break away from work precedes the start letter of T(erm). 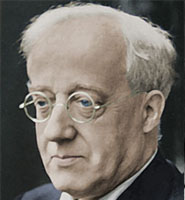 14a  Popular holiday spot in Lake District? Town’s reaction may be tricky (8,5)
{CONISTON WATER} – an anagram (may be tricky) of TOWN’S REACTION.

21a  Stop working in a university, offering a final word (5)
{ADIEU} – a verb meaning to stop working, which may apply to a piece of machinery or the human body, goes between A (from the clue) and U(niversity).

23a  Respect reduced by half in Blair’s response to cross-examination? (9)
{TESTIMONY} – we have to remove the second half of a 10-letter word meaning respect or regard and put what’s left inside the forename of our old Prime Minister. This is possibly a comment on TB’s appearance before the Chilcot Committee’s inquiry into Britain’s involvement in the Iraq war.

24a  Write in an ‘impressive’ way (8)
{INSCRIBE} – gentle cryptic definition of a verb to write or make a permanent impression (the name of a winner on a trophy, for example).

25a  Princess once in dock (6)
{MARINA} – double definition. I vaguely remember this old royal princess who died in 1968 and whose name was later associated with what motoring journalists dubbed one of the worst cars of all time.

26a  Sums of money advanced to protect unfortunate islands (8)
{ANTILLES} – sums of money put up in advance of a deal at poker containing (to protect) an adjective meaning unfortunate or unpleasant make the island groupings forming most of the West Indies.

27a  Shot left half buried in hide (6)
{PELLET} – half of the word ‘left’ gets inserted (buried) in the hide or skin of an animal.

1d  Scoundrel offering something the curate was euphemistic about? (3,3)
{BAD EGG} – double definition, the second referring to the rotten breakfast item that the curate made the best of in a famous Punch cartoon.

2d  A mural is concocted to accommodate 100 images (9)
{SIMULACRA} – an anagram (concocted) of A MURAL IS containing (to accommodate) the Roman numeral for 100.

3d  Facility for motorists taking wrong diversion? Not so (5-2)
{DRIVE-IN} – an anagram (wrong) of DIVER(s)I(o)N without the letters of SO gives us a mainly North American facility for doing things without the need to take any exercise.

5d  Fearsome Cdr could sort them out (5,6)
{ARMED FORCES} – an semi-all-in-one clue. What could be sorted out is an anagram of FEARSOME CDR.

6d  Jump made by dog following Sarah (7)
{SALCHOW} – this is a type of jump in ice skating. An oriental breed of dog follows the common abbreviation for Sarah.

7d  College exam — top grade not obtainable, that is admitted (5)
{ORIEL} – start with a type of exam not requiring written answers, then remove the letter used for the top grade and in its place put (admitted) the abbreviation meaning ‘that is’.

8d  Worthless Greek character, little good, a politician (8)
{NUGATORY} – string together a) the thirteenth character in the Greek alphabet, b) the abbreviation for good, c) A (from the clue) and d) a right-wing politician.

12d  Terrible creeps on the board regarded as trustworthy (11)
{RESPECTABLE} – an anagram (terrible) of CREEPS is followed by a board.

15d  Barber’s getting lots, with old competitor losing heart (9)
{TONSORIAL} – this is an adjective relating to hairdressing. Start with an informal word for lots or masses and add O(ld) and a competitor without the V at his heart.

16d  Science in brief: a spasm accompanies a form of neuritis (8)
{SCIATICA} – the abbreviation (in brief) of science is followed by A (from the clue) and a facial spasm together with (accompanies) a final A.

19d  Ape‘s claim to be very important leading to ab’orrence (7)
{IMITATE} – an informal claim to be the bee’s knees (1’1,2) is followed by a synonym for abhorrence but with the H dropped in the same way as in the clue.

20d  Ruler shows extremes of devilry, unpleasant no end (6)
{DYNAST} – this is a ruler from a hereditary reigning family. The outer letters (extremes) of D(evilr)Y are followed by an adjective meaning unpleasant without its final letter (no end).

22d  Picture of institute taken around end of June (5)
{INSET} – the four-letter abbreviation for institute contains the end letter of (Jun)E.

The clues I liked best were 14a and 1d. How about you?

Housekeeping Tips: Number 93. Always keep a few ‘Get Well Soon’ cards on the mantelpiece. Unexpected visitors will assume that you’ve been too ill to clean.