You will need some Biblical and General Knowledge this morning, as well as your Roman numerals, to deal with today’s Giovanni. All fairly clued, as we would expect.

5a           Mount desert animal to cross river (6)
CARMEL – The animal known as ‘the ship of the desert’ wrapped around River, giving us the name of a mountain in Israel associated with the prophet Elijah.

9a           From what we hear, actor Smith loves men fighting (8)
MATADORS – A homophone (from what we hear) of the first name of a recent holder of the Doctor Who role and another word for ‘loves’. These men take part in tauromachy.

10a         English author to obtain from library? (6)
BORROW – Double definition, the first being the surname  of the author of Lavengro and The Romany Rye.

12a         Bank interest rates initially revised after crash (9)
RIVERSIDE – An anagram (after crash) of REVISED and the first letters (initially) of Interest Rates.

14a         Drop off as junior public schoolboy tackling Latin (4)
FLAG – The name given to junior schoolboys who had to perform menial tasks for senior pupils, wrapped around Latin.

19a         Examination — one of those coming down here is confused! (7)
MEDICAL – This physical examination is an anagram (confused) of one of the Down answers in this crossword. There are two to choose from – 4d and 21d – so take your pick.

21a         Lady’s title provided by steward on arrival (4)
DONA – The title given to a Spanish noblewoman is hidden in the clue.

24a         Greek letter that is half-obscured by an earlier one (5)
THETA – Start with THAT (from the clue), then replace the second half with the name of a Greek letter which precedes our answer in the Greek alphabet.

27a         Article by relative that may have been written at university (6)
THESIS – A definite article followed by an informal term for a female sibling.

28a         End of the line — not just for a French supremo (8)
WATERLOO – A London railway terminus named for the battle which finally defeated a French emperor.

29a         After game the female had got her skates on? (6)
RUSHED – The initials of one of the forms of a game played by people with odd-shaped balls, followed by the pronoun for ‘the female’ and a contracted form of ‘had’.

30a         Spoilt child being naughty gets exposed (8)
IMPAIRED – A three-letter word for a naughty or mischievous child, followed by ‘exposed’ or ‘brought out’.

3d           Religious meal in which prophet entertains 500 (5)
SEDER – The Roman numeral for 500 inserted into another word for prophet. The answer is a Jewish Passover meal.

4d           Grumbling, being bothered about parking (7)
CARPING – ‘Being bothered’ or ‘taking trouble’, wrapped around the symbol for a car park.

6d           Notice something being said in worship (9)
ADORATION – A short form of a commercial notice followed by a public speech.

7d           Arrives before one to get into game, rescheduled match (8)
MARRIAGE – Start with an abbreviation for ‘arrives’, add the Roman numeral for one, and put the result inside an anagram (rescheduled) of GAME.

11d         Swimmer beginning to worry with tide going out (4)
WEBB – The first letter of Worry followed by the technical term for the tide going out, giving us the surname of the first man to swim the English Channel. 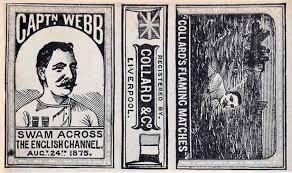 17d         One to flatter in the most sincere way? (8)
IMITATOR – The sincerest form of flattery, according to the proverb, is …? The answer is the person carrying out that action.

18d         What’s shown by one with endless lolling around? (8)
IDLENESS – An all-in-one clue, where the whole clue is the definition, and the wordplay has the Roman numeral for one followed by an anagram (lolling around) of ENDLESS.

20d         Go over items presented systematically (4)
LIST – Double definition, the first being what a ship going over to one side is doing.

22d         Bandleader in factory meeting HM (6)
MILLER – A type of factory followed by the regnal cipher of the Queen.

26d         Any number in region where sport can be watched (5)
ARENA – The algebraic symbol for ‘any number’ placed inside a region or zone.