Good morning from South Staffs where the shower clouds are building up.

I found today’s Giovanni a straightforward solve, comfortably within ** time and with only a couple of slightly unusual words.

3a           Was soft stuff in chopped tree recyclable material? (5,5)
{ WASTE PAPER } Put together WAS (from the clue) and the soft stuff you might feed to a baby inside an anagram (chopped) of TREE.

9a           Nothing alive ultimately in river (4)
{ NILE } The word most commonly used to denote a zero score at football, followed by the last letter of alivE, leading to a long river in Africa.

10a         Distressed but unbowed, we hear? (10)
{ STRAITENED } A word often seen in conjunction with ‘circumstances’ which means distressed or reduced, and sounds like (we hear) a word meaning unbowed or unbent.

11a         Little animal in rubbish fire destroyed (7)
{ ROTIFER } A word for rubbish, followed by an anagram (destroyed) of FIRE, to give a minute aquatic animal whose rings of waving cilia suggest a rotating wheel (it says in the BRB). 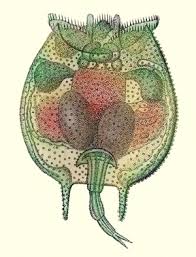 14a         Popular company stars, offering facilities for sick people (11)
{ INFIRMARIES } Put together a two-letter word for popular, a company or partnership, and a sign of the Zodiac.

24a         Rider on horseback edges off to get close (4)
{ NIGH } Remove the first and last letters (edges off) from a word describing an armoured man on horseback.

26a         Poor area surrounded by soldiers (4)
{ MEAN } An abbreviation for Area inside how an officer might refer to the soldiers under his command.

2d           Endlessly deceptive over time, a very loud character in plays (8)
{ FALSTAFF } This character from Shakespeare’s Henry IV Part I, Henry IV Part II,and The Merry Wives of Windsor is made up of a word for deceptive with its final E removed, Time, and the musical symbol for ‘very loud’.

8d           Journalist turning up on street after game is most ill-mannered (6)
{ RUDEST } The initials denoting a 15-a-side game, followed by the reversal (turning up) of the usual journalist, then the abbreviation for street.

12d         Where skilled operators may be told to go to blazes (4,7)
{ FIRE STATION } Cryptic definition of the base for members of one of the emergency services.

17d         Arouse lad with introduction of fascinating female (6,2)
{ SWITCH ON } A fascinating or magical female goes inside another word for lad.

19d         Threaten little devil with death (6)
{ IMPEND } A little devil or wicked spirit followed by what death is in relation to life.

22d         Singer wants musical instrument? Not on! (5)
{ BASSO } Remove the final ON from a large woodwind instrument, to get a deep-voiced opera singer.