This was one of those puzzles which seemed to take me longer than usual, but then when I’d completed it I couldn’t see why I’d been held up (probably the sign of a very good setter). Were you similarly afflicted or did you go through it like a dose of salts? Do let me know how you got on.

If you want to reveal an answer you’ll have to highlight the gap between the curly brackets under the clue; if you’re accessing the blog from an I-whatsit or similar there are some hints to help you do this in the FAQ.

4a  This writer’s wanting agreement to make impression (6)
{IMPACT} – the contracted form of ‘this writer is’ from the point of view of the setter followed by a formal agreement.

10a  Blemish of Greek character — that’s about tax primarily? (6)
{STIGMA} – the eighteenth letter of the Greek alphabet contains the prime letter of T(ax).

13a  What could be statement in Holy Writ (3,9)
{NEW TESTAMENT} – we’re seeing quite of few more of these reverse anagrams on the back-page these days. If you take the answer as anagram indicator followed by fodder and solve the anagram you should end up with ‘statement’.

16a  Traveller’s joy? Senior citizen experiences it as hairy (3,4,5)
{OLD MAN’S BEARD} – double definition – firstly another name for a wild clematis plant called traveller’s joy and secondly the hairy growth on the face of some senior citizens. 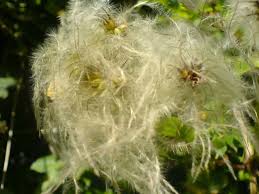 20a  A comic Frenchman in group is to abandon principles (10)
{APOSTATISE} – the Frenchman is Jacques the actor who portrayed the bumbling and non-speaking Monsieur Hulot in films (comic? – he’ll keep you amused for … 30 seconds, perhaps). Start with A (from the clue) then insert the actor’s surname in a group of men deputised by the sheriff to enforce the law in the wild west.


21a  List of chaps attending university (4)
{MENU} – another word for chaps followed by (attending) U(niversity).

22a  This writer that is penning article, an unkind type (6)
{MEANIE} – the objective pronoun which the setter (this writer) would use to refer to himself and the usual abbreviation for ‘that is’ contain (penning) an indefinite article.

23a  French refusal to accept a European dictator (8)
{NAPOLEON} – a negative response in French contains (accepting) A and a citizen of a European country.

24a  Before start of ritual saint must be clothed in proper cloth (6)
{DUSTER} – before the start letter of R(itual) the two-character abbreviation for saint has to be inserted (must be clothed) in an adjective meaning proper or appropriate.

25a  Impassioned founder of cosmetics firm, foremost in toiletry (6)
{ARDENT} – start with the surname of Elizabeth, who founded a cosmetics company and whose real name was Florence Nightingale Graham (you learn something every day), then add the foremost letter of T(oiletry).

2d  Leader of academy donated a plant (5)
{AGAVE} – this is a plant that flowers in Central America (also called American Aloe). The leading letter of A(cademy) is followed by a verb meaning donated.

3d  Black donkey seen around British isle with a whole lot of plants and animals (7)
{BIOMASS} – this word means the total quantity of living material in a given unit area. B(lack) and another word for donkey go round the abbreviation for a British island in the Irish Sea.

6d  Great thinker, exceptional sort with tale to engage one (9)
{ARISTOTLE} – an anagram (exceptional) of SORT and TALE containing (to engage) I (one).

7d  Sort of girl that’s grave with zero yen (6)
{TOMBOY} – a type of grave (usually an underground one) is followed by the letter that looks like zero and Y(en).

9d  A celebrity turning up in the distance — Scot who has dreadlocks? (11)
(Revised On-line clue) Star out in the distance followed by Scot who has dreadlocks? (11)
{RASTAFARIAN} – reverse (turning up) a synonym for celebrity [In the revised clue this is just an anagram (out) of STAR], then add an adverb meaning in the distance and one of the usual Scottish male forenames. [When I wrote the original hint I just assumed that the first four letters of the answer were a reversal of STAR but as Rabbit Dave and others have pointed out that doesn’t work. Phil McNeill (Telegraph Crosswords Editor) has confirmed that there was an error in the clue and Giovanni has supplied a revised clue (see above) for the on-line site].

14d  Numbers in the old days you would get on beach (9)
{THOUSANDS} – the manner in which a person (you) would have been addressed in the old days (still used amongst the Quakers and in some parts of northern England, tha knows) is followed (would get on, in a down clue) by another word for beach.

15d  Institute‘s period of time for accommodating call (5,3)
{BRING OUT} – the definition here is a phrasal verb, meaning to inaugurate or launch. A period or spell of time goes round (accommodating) a verb to call by phone.

17d  Terrific marksman  that sees nothing? (7)
{DEADEYE} – a terrific marksman (Dick, possibly) could also, if split (4,3), be a way of describing something that can’t see.

18d  No. 5 for Leeds, one who cries as a player on the field? (7)
{SWEEPER} – this is a football defender who doesn’t have any specific marking responsibilities but who clears up any threats that other defenders have failed to control. The fifth character of (Leed)S is followed by someone who cries.

19d  Unhappy about page and about facing pages (6)
{SPREAD} – a word for two facing pages of printed matter comes from an adjective meaning unhappy containing P(age) and a preposition meaning about or concerning.

21d  Yours truly’s penning brief line as children’s author (5)
{MILNE} – a pronoun standing for what belongs to the setter (yours truly’s) contains (penning) a brief L(ine).

The clue which I liked best was 13a. What took your fancy?