Love him or hate him, Ray T is back today! As usual there are two difficulty ratings, the first for those that love him and the second for the rest.

1a    Grannie, a nan possibly old inside? (12)
{NONAGENARIAN} – an anagram (possibly) of GRANNIE A NAN with O(ld) inside gives someone loosely described by the whole clue

9a    Put up again in bedroom, perhaps (9)
{REPAPERED} – this verb means put up again on the wall of a bedroom or other room – well done if you got this without most or all of the checking letters; I thought the clue was a bit weak

16a    He makes interest, saving endless readies initially (5)
{MISER} – this person who hoards money comes from the initial letters of five words in the clue

19a    Deceive girl, almost fashionable model (9)
{MISINFORM} – to get this verb meaning to deceive run together most of a word for a young girl, a two-letter word meaning fashionable and a model or shape

20a    At home, United in exercise process (5)
{INPUT}- a two-letter word meaning at home is followed by U(nited) inside some exercises to get this process

22a    Scot free, the man with bizarre character outside (9)
{HEBRIDEAN} – this Scot from islands off the north west coast is derived from a verb meaning to free with the male pronoun and a bizarre chap outside

25a    Grandma’s remote, sadly getting very short measure (9)
{NANOMETRE} – a three-letter word for a Grandma is followed by an anagram (sadly) of REMOTE to get a short measure which is 10−9 of the metric standard length

2d    Part of gunpowder in gun, it recoils (5)
{NITRE} – an ingredient in gunpowder id hidden inside the clue

14d    ‘Little Boy’? No, a smaller, older explosive device (9)
{MINUTEMAN} – an adjective meaning very little is followed by an “older” boy to get this three-stage intercontinental ballistic missile

15d    Nabokov’s first with the empty novel ‘Lolita’ (9)
{NYMPHETTE} – the initial letter (first) of Nabokov is followed by an anagram (novel) of THE EMPTY to get a Lolita, a young girl who acts in a sexually provocative manner – the word Lolita came from the eponymous character in the famous novel by Vladimir Nabokov 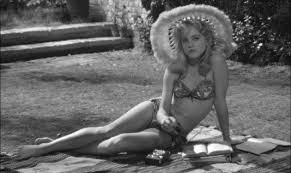 17d    Secure rubbish in excess ends up here? (9)
{STOREROOM} – start with a verb meaning to secure a boat, add some rubbish inside the outer letters (end) of ExcesS then reverse the lot (up in a down clue) to get somewhere the rubbish could be secured

While there is only mild innuendo today, the signature Queen references are there!