I had heard a rumour that Elgar was returning to the back page after a long absence and if this isn’t it I’ll eat my 18 across. Although this is not as beastly as some of his Toughies, most of his usual tricks are to be found here. I know that some are going to find this difficult, but all of the clues can be solved with perseverance.

1a    All the cards? One of them is limiting North on board game (4,6)
{DECK TENNIS} – start with a word for a set of 52 playing cards and then add one of those cards and IS from the clue around N(orth) to get a game played on board a ship, not on a piece of cardboard

6a    Heavily strike driver? (4)
{CLUB} – a simple double definition just to prove that there are a few easy clues

12a    Catcall from writer that hurt! (4)
{MEOW} – this catcall is a charade of the objective pronoun for the writer/setter followed by a short word that expresses the feeling “that hurt!”

18a    Showing outward strain, I left book and hat (6)
{TRILBY} – put a verb meaning to strain or attempt outside I L(eft) B(ook) to get a type of hat

Can’t find a picture of the eponymous character in the play based on the book by George du Maurier, so this will have to do! 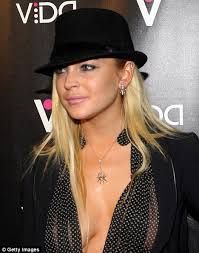 23a    Those starting sprint badly, after all, finish under high pressure (9)
{SANDBLAST} – separate the initial letters of Sprint Badly with a conjunction then add a word meaning after all to get a verb meaning to finish or clean under high pressure

27a    Company time engaged in quiet manoeuvring with mum, flirting (10)
{COQUETTISH} – start with CO(mpany) and then add T(ime) inside an anagram (manoeuvring) of QUIET and finish off with mum or quiet to get an adjective meaning flirtatious

29a    Fleet Street source of legendary piemeat, herbs or nuts filling roll (10)
{BARBERSHOP} – Sweeney Todd’s workplace, where he killed his victims and passed their bodies to Mrs Lovett to be made into pies, is created by putting an anagram (nuts) of HERBS OR inside (filling) not a pie but a bread roll 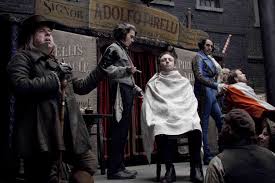 3d, 21d &11d      Unwisely lose the essential element: b—– hot tub — what that wee, airworthy Beth’s showing off! (5,3,4,3,4,3,4,5)
{THROW THE BABY OUT WITH THE BATH WATER} – this phrase meaning to do something stupid as a consequence of doing something else, or as Chambers gives “to get rid of the essential along with the superfluous”, is an anagram (showing off) of B HOT TUB WHAT THAT WEE AIRWORTHY BETH – Chambers gives the last two words as a single word

7d           A letter to Greek includes a measure of Latin (7)
{LAMBADA} – insert A from the clue into a Greek letter to get a rhythmic and energetic dance originating in Latin America – Chambers gives “A dance, especially  a slow and stately one” as one of the definitions of measure! 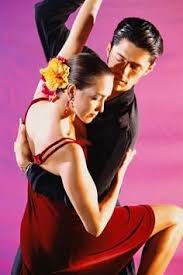 14d         I’ll stop you from lying about the rust — it’s odd (5,5)
{TRUTH SERUM} – any of various drugs which make subjects under questioning less wary in their replies (don’t you just love some of the definitions on Chambers?) is derived from an anagram () of (about) of THE RUST followed by a word meaning odd or strange

17d         On half a drum with one digit, play ‘The Little General’ (3,5)
{TOM THUMB} – half of a drum played with the hands is followed by a digit on the hand to get the stage name of Charles Sherwood Stratton, the self-styled general of small stature

19d         Victim of rhythm stick could arrange to ruin day (3,4)
{IAN DURY} – this person, accompanied by his group from 8 down, sang Hit Me with Your Rhythm Stick – his name is an anagram (arrange) of RUIN DAY 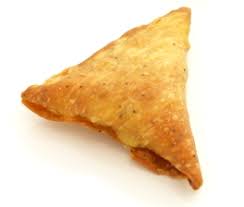 Very much a love-it or hate-it puzzle – I loved it!