This is a fairly routine Giovanni puzzle with a fair sprinkling of proper names. After last week’s Nina I looked carefully for another (but in vain). Let us know how you enjoyed it.
If you need, in spite of the hint, to see an answer, just highlight the spaces between the curly brackets under the clue.

1a  South-east Asians, dreadful maniacs imprisoning person (10)
{CAMBODIANS} – citizens of a South-East Asian country are an anagram (dreadful) of MANIACS with an informal word for a person inside (imprisoning).

9a  Friends about to produce a hit (4)
{SLAP} – reverse (about) another word for friends.

10a  In which someone may be out of his or her class? (10)
{PLAYGROUND} – cryptic definition of where schoolchildren may spend their time between lessons.

11a  German boy certainly not a Bunter type (6)
{DIETER} – Billy Bunter was not known for restricting his intake so could not be described thus. With a different pronunciation it’s a common German male forename. With forenames I usually try to identify someone famous with that name – the only one I can think of here is the footballer Herr Hoeneß, who played for West Germany in the 1980s.

12a  What may give cover to one who is lying (7)
{BEDDING} – a fairly weak cryptic definition of what may give you cover at night.

15a  Senior schoolgirl gets a bit twisted, becoming model (7)
{PERFECT} – start with a senior schoolgirl (or boy) who is given a limited amount of authority over younger pupils and swap (get twisted) the second and third letters.

16a  Frigid upper-class girl with little money once (5)
{GELID} – an adjective meaning icy or frigid is a charade of an informal word for an upper-class girl and a coin (little in value but large in size) used prior to 15th February 1971.

17a  Split wood brought back and lit finally (4)
{RIFT} – this is a split or break in relations. Reverse (brought back) the wood of an evergreen tree and add the final letter of (li)T.

18a  Mist somewhere in Middlesex, we hear (4)
{HAZE} – this mist sounds like (we hear) a town which was once in Middlesex, but which, since Middlesex no longer exists as a local government entity, is now in the London Borough of Hillingdon.

19a  Leave old city in South America (5)
{QUITO} – a verb to leave is followed by O(ld) to make the capital city of Ecuador.

21a  Core group of students tackling tricky clue (7)
{NUCLEUS} – the core, of an atom or anything else, is built from the Students’ Union around (tackling) an anagram (tricky) of CLUE.

22a  Hoarding pounds, misers unlikely to be such? (7)
{SMILERS} – L is an abbreviation that can mean either pound or pounds. Put it inside (hoarding) an anagram (unlikely) of MISERS. I’m not sure that most misers are grim-faced grouches – surely some must laugh all the way to the bank?

24a  Judge a script brought in by boy (6)
{SAMSON} – insert (brought in) A and the abbreviation for manuscript in a male child (boy) to get an Old Testament character. He is known mainly for a) being supernaturally strong and b) having a bad hair day, but apparently in his spare time, when not wiping out whole armies with the jawbone of an ass, he was also a judge.

27a  One who has lost all his cash simply can’t get over it! (4,6)
{TOLL BRIDGE} – cryptic definition of what you have to pay to cross. Based on what seems to be the current government’s road policy there may be a lot more of these in future.

29a  Works at Llantrisant maybe and shows a profit (5,5)
{MAKES MONEY} – there’s a bit of general knowledge required here. Llantrisant in South Wales is the home of the Royal Mint (the town is referred to, rather unkindly, after the old polo advert, as “the hole with the mint”).

2d  Sack that’s left inside bar (4)
{AXLE} – it’s always wise to check whether the “’s” in a clue stands for “is” or “has”. In this case it’s “is” in the surface but “has” in the wordplay. So what we want is a bar or spindle that comes from a verb to sack or dismiss staff which has L(eft) inside it.

3d  That is buried in plot further away (6)
{BEYOND} – a poetic adjective meaning “that” (used to describe something at a distance) goes inside (buried in) a plot (in the garden, perhaps) to make an adverb meaning further away.

4d  Place in Surrey could be complete with two sovereigns (7)
{DORKING} – we’ve had a place in Middlesex so to even things up we now have a town south of the river in Surrey (the birthplace of Lord Olivier). A verb meaning to complete is followed by a) the abbreviation for rex and b) what rex means.

5d  Chemical in a shapeless mass not soft (4)
{ALUM} – start with a shapeless mass (1,4) and remove the final P (not soft) then squash up what’s left to make a hydrated double sulphate of aluminium and potassium (I assumed that the word derived from the first two letters of the first and the last two letters of the second word, but this is not the case according to the BRB).

6d  A horse may be second — rotten (7)
{SADDLED} –a horse may be this, prior to being ridden. S(econd) is followed by an adjective meaning rotten or putrid.

7d  Clones are, come what may (3,3,4)
{ALL THE SAME} – what clones are is also an expression meaning come what may or whatever happens.

12d  A soberness not usually found in ladies (10)
{BARONESSES} – an anagram (not usually) of A SOBERNESS produces titled ladies.

13d  Damage makes building material fade badly on top (10)
{DEFACEMENT} – a word meaning damage or disfigurement comes from a powdery building material preceded (on, top, in a down clue) by an anagram (badly) of FADE.

15d  Drinks — any number needed in the mines (5)
{PINTS} – insert the letter used in maths or everyday expressions for an unknown, usually large, number inside another word for mines.

19d  The tiniest bit gives a fashion designer hesitation (7)
{QUANTUM} – the surname of a fashion designer famous in the sixties (and venerated by many for what she made fashionable) is followed by an exclamation indicating hesitation. The result is a word meaning an amount (not necessarily small) but which, because of its use in physics, is used these days for a tiny bit. 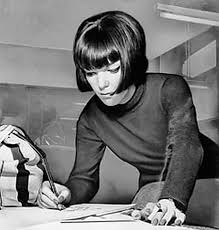 23d  Desire shown by one bather, primarily to get into pool (6)
{LIBIDO} – sexual desire results from inserting I (one) and the primary letter of B(ather) in a swimming pool.

25d  Criticism when one gets cut shaving? (4)
{FLAK} – an informal word for strong criticism is left when the final E is cut from a sliver or shaving.

26d  Contend that’s not right, making complaint (4)
{AGUE} – remove the R (not right) from a verb to contend or dispute.

My favourite clue today was 16a. How about you?