Good morning from South Staffs, and Happy Birthday to Big Dave’s blog, which is now a teenager:

One or two less common words slowed me up somewhat in finishing today’s crossword, but all of them could be worked out from the checkers.

1a           Pour tea drink over flyer (2,6)
BE MOTHER – An alcoholic drink wrapped round a flying insect, producing a colloquial phrase for being in charge of the teapot.

6a           Assistant‘s job to keep record (6)
DEPUTY – A job or task wrapped round an abbreviation for a type of gramophone record.

10a         Clumsy and sluggish tackling ten exercise classes (8)
INEXPERT – Put together the Roman numeral for ten and school exercise classes, then insert the result into a word for ‘sluggish’.

11a         Revolutionary urge with several revolting (8)
GRUESOME – Anagram  (revolutionary) of URGE followed by another word for ‘several’.

19a         Have beef joint after whiskey (6)
WHINGE – The letter represented by Whiskey in the NATO alphabet, followed by a type of joint which allows the joined pieces to move relative to each other.

21a         Board cut here, paring edges (8)
TRENCHER – A cut in the ground followed by the inside letters (paring edges) of hERe, giving us an old word for a board or platter. 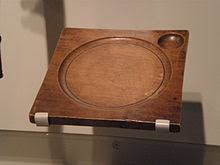 24a         Annoying liars oddly ignored by monarch (6)
IRKING – The even-numbered letters (oddly ignored) of lIaRs, followed by a male monarch.

25a         I follow after father leaves (6)
FRISEE – An abbreviation for ‘father’ used in writing the form of address to a priest, followed by a phrase (1,3) for ‘I follow’ or ‘I understand’, producing some salad leaves.

26a         Plant western doctor inserted in nose (8)
SNOWDROP – Put together abbreviations for Western and ‘doctor’, then wrap a word for ‘nose’ or ‘pry’ around the result. 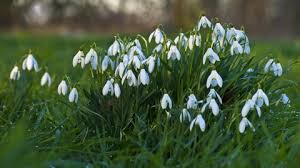 4d           Agonising hard over stick for shooting in golf (9)
HARROWING – Put together an abbreviation for Hard, the sort of stick which is shot out of a bow, IN (from the clue) and the letter represented by Golf in the NATO alphabet.

6d           Graduate regularly neared elevated ambition (5)
DREAM – Put together the letters after the name of a senior Arts graduate and alternate letters (regularly) of nEaReD, then reverse (elevated) the result.

7d           Usually turned up in criminal payroll (9)
POPULARLY – Anagram (criminal) of PAYROLL, wrapped round the reverse (turned) of UP (from the clue).

8d           One’s unhurried love is put into cake (8)
TORTOISE – Put together the letter that looks like a love score at tennis and IS (from the clue), then wrap a German word for a rich, usually multilayered, cake that is filled with whipped cream, buttercreams, mousses, jams, or fruit around the result.

13d         Is first to like Scandinavian name for Brits, perhaps (9)
ISLANDERS – Put together IS (from the clue), the first letter of Like, and a Scandinavian first name, equivalent of ‘Andrew’ in English, to get a description of people living in Britain.

15d         When arteries may get clogged up? (4,4)
RUSH HOUR – Cryptic definition, where the arteries are main roads, not blood vessels.

17d         Two Greek characters involved in case of this disease (7)
TETANUS – The outside letters (case) of ThiS are placed either side of the names of two Greek letters, producing a nasty disease also known as lockjaw.

22d         Put in liquor barrel, son’s left to get plastered (5)
CAKED – Remove the abbreviation for Son from a word for ‘put in barrel’, and you get plastered, but in mud, not alcohol.