Good morning from South Staffs on a cloudy day with some rain forecast.

The NW corner of today’s puzzle, which is where I like to start, was the last to fall, and led me well into my *** time bracket.

1a           Slow boat going to Spain, transporter that’s sunk (4)
TUBE – A pejorative word for a slow, possibly unseaworthy, boat, followed by the IVR code for Spain. The answer is a familiar word for the London Underground.

3a           Massive smash coming up with ‘Shaking All Over’? (10)
EARTHQUAKE – Cryptic definition of something which leaves the world shaken.

9a           They regularly dip and rise, first to last (4)
OARS – Another word for ‘rise’, as a glider might on a thermal, with the first letter moved to the end, giving us something regularly dipped in water.

22a         Bishop first to eat egg on the counter, most substantial (7)
BIGGEST – The chess notation for ‘bishop’, followed by three letters which look like the alphanumeric version of ‘first’ wrapped round the reverse (on the counter) of EGG (from the clue).

24a         What traditionally was carried up the hill — light when delivered! (4)
PAIL – What Jack and Jill carried between them sounds like (when delivered) a word for ‘light coloured’.

1d           Turned up what thieves might hide and drop here? (4,4)
TOOL SHED – Reverse (turned up) a word for a thief’s ill-gotten gains, then add another word for ‘drop’ (as a tree drops its leaves), and you get somewhere that a thief might use as a hiding place, though it’s more likely to be one of the places that gets robbed.  I’m not convinced that this clue works properly.

2d           Dig electronic signal that’s useful for eating out (8)
BARBECUE – A verbal dig, followed by the usual abbreviation for Electronic, and the signal to an actor that it’s time to enter or speak. 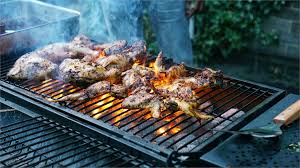 5d           Lots of money taken from you, and aboard ship  (9)
THOUSANDS – Start with an archaic word for ‘you’, then add the usual abbreviation for a steamship wrapped round AND (from the clue).

8d           Fraction of this clue plus this letter? (6)
EIGHTH – Write out the number of this clue, then add the letter of the alphabet which corresponds to the clue number.

15d         Static charged particle going about small entry (9)
INSERTION – Put together another word for ‘static’ or ‘unreactive’ and an electrically-charged particle, then wrap the result around the abbreviation for Small.

16d         Americans enjoy this wretched dance  (8)
BASEBALL – Another word for ‘wretched’ or ‘low’, followed by a formal dance event, giving us a version of rounders enjoyed by Americans and a good many others. 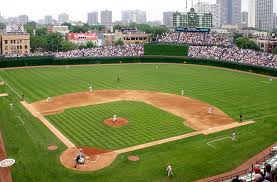 22d         Where deposits build up both sides of the Nile, say (5)
BANKS – Double definition, the first relating to deposits of money.