Good morning from South Staffs on a rare sunny morning.

I found the top half of today’s Giovanni quite tricky, which pushed my difficulty rating well into ***.

1a           Tree about to be planted by another tree outside a workplace (8)
CALABASH – The Latin abbreviation for ‘about’ or ‘approximately’ and a deciduous tree, placed either side of the short form of a scientist’s workplace, giving us a Central American tree. 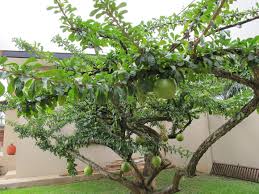 5a           Notice wickedness — you need guidance (6)
ADVICE – A commercial notice followed by the opposite of virtue.

9a           Rabbit to look radiant outside a house (8)
BUNGALOW – Put together a three-letter informal word for a rabbit, and a verb for ‘look radiant’ (what ladies do while gentlemen perspire and horses sweat) wrapped around A (from the clue).

10a         Glasses? They can make high-pitched sounds (6)
FLUTES – Narrow glasses used for champagne share the name of a woodwind instrument in the upper register of the orchestra.

12a         Part of Greater Manchester in short religious book (6)
ECCLES – Double definition: a town in Greater Manchester with a particular variety of cake named for it; and the abbreviation for a book of the Old Testament which comes between Proverbs and the Song of Solomon. The words of this song are taken from that book:

15a         Garments for certain racehorses? (7)
JUMPERS – Some warm clothing or some racehorses which don’t run on the Flat.

20a         Regret in audience for what is saucy (4)
ROUX – The answer is a homophone (in audience) of a word for ‘regret’, and is a mixture of butter and flour used to thicken sauces.

26a         Each group backs the ultimate character, one showing huge enthusiasm (6)
ZEALOT – The last letter of the alphabet followed by an abbreviation for ‘each’ and a group or collection.

29a         Manufacturing establishment hard to find in Notts town (8)
WORKSHOP – Hard is inserted into a town in north Nottinghamshire.

30a         Writer sitting by river to become more profound (6)
DEEPEN – The name of a Welsh or Scottish river, followed by something to write with.

1d           Taxi came first, being sent urgent message (6)
CABLED – Another word for a taxi followed by ‘came first’ (in a race), giving us a way that urgent messages were first sent by electronic means.

3d           Having dined in inn, revolutionary gets assaulted (6,2)
BEATEN UP – Reverse (revolutionary) another word for ‘inn’ and wrap it around ‘having dined’.

11d         Children’s author heard song (7)
CARROLL – The surname of the author of Alice in Wonderland which sounds like a word for a song, usually a seasonal one in modern usage.

17d         Put up for annual test, Megane passed finally (8)
PROMOTED – Put together a Latin word for ‘for’, the acronym for an annual test of motor vehicles , and the last letters (finally) of MeganE and passeD.

18d         US general taking team south of stream (8)
BURNSIDE – A Scottish stream and another word for a sports team, giving us the surname of a 19th-century American general who may be known across the pond, but meant nothing to me. But apparently his distinctive style of facial hair is still named after him, though the two halves of his name are interchanged. 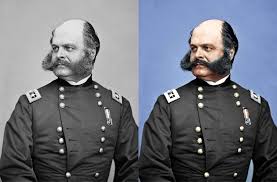 19d         Treks are tricky for one proceeding in the nude (8)
STREAKER – Anagram (tricky) of TREKS ARE. I’ve used this clip before, but it probably bears repetition.

22d         Get rid of drug, creating ticklish situation (6)
SCRAPE – Another word for ‘get rid of’, particularly where something mechanical is concerned, followed by a single letter name for an illegal drug.

27d         Love being in dance band (4)
HOOP – The letter which looks like a love score at tennis is inserted into an informal word for a dance.