Good morning from South Staffs where we have a damp, grey start to the Bank Holiday weekend.

A little General Knowledge required this morning, but no particularly obscure words from Giovanni, so a reasonably straightforward puzzle.

1a           Supporting what’s proposed in meeting for sales campaign (9)
PROMOTION – A prefix meaning ‘supporting’ or ‘in favour of’, followed by something put forward for debate in a formal meeting.

9a           Draw back from sports ground with slimy liquid (6)
RECOIL – A short term for a park or recreation ground, followed by a slimy liquid often used as a lubricant.

10a         Report of European friend in position of defeat (9)
CHECKMATE – The final position in a game of chess could also sound like a friend from an Eastern European country.

13a         Bill with minimal amount of money creates stress (6)
ACCENT – An abbreviation for a bill or account, followed by a small coin in the US or Euro currencies.

19a         Old city ceremony starts to excite individuals immensely (7)
POMPEII – Another word for ‘ceremony’, often twinned with ‘circumstance’, followed by the initial letters (starts) of Excite, Individuals and Immensely, giving us a Roman city destroyed by Mount Vesuvius.

20a         Stuffy girl I embarrassed (7)
UNAIRED – Put together a girl’s name (Ms Stubbs, perhaps), I (from the clue), and the colour associated with embarrassment.

21a         Gesture of acceptance or refusal received finally (3)
NOD – A short word of refusal followed by the last letter (finally) of receiveD.

23a         Come to an end, being dismissed by umpire (3,3)
RUN OUT – A phrase used when supplies come to an end or are exhausted is also a method of dismissal at cricket.

27a         Remarkable bird tweeting initially having been caught (9)
STARTLING – Insert the first letter (initially) of Tweeting into a common bird which may form large flocks called ‘murmurations’.

29a         Speed of soldiers maybe, intelligent when confronting the enemy (5,4)
QUICK TIME – Another word for ‘intelligent’ or ‘lively’ followed by the concept sometimes referred to as ‘the enemy’.

30a         Number getting cross twice in ancient Rome (6)
TWENTY – A number which in Roman numerals consists of two cross-shaped symbols.

4d           Little kid grabs mum having nothing that’s suitable to eat (6)
TOMATO – Start with a small child wrapped around a short word for ‘mum’, then add the letter which looks like a zero.

5d           Unfashionable team having emerged from the tunnel? (7)
OUTSIDE – Split the answer (3,4) and you have ‘unfashionable’ and another word for a sports team.

7d           What patient may do before subsequent transplant is despair (4,5)
LOSE HEART – A figurative expression for ‘despair’ is also a literal description of the effect of the first stage of a transplant operation.

8d           People primarily wanting freedom? We’ve heard that before (9)
PLATITUDE – The first letter of People followed by a word for ‘freedom’ or ‘room to manoeuvre’.

15d         Being awfully mean, one restricts useful services (9)
AMENITIES – Put together an anagram (awfully) of MEAN, the Roman numeral for one, and a verb meaning ‘restricts’ or ‘binds’.

16d         Soldiers completely capturing small island, as is necessary (9)
REQUISITE – The initials of one of the usual crossword regiments of Engineers, followed by an adverb which can mean both ‘completely’ and ‘fairly’ or ‘somewhat’, wrapped around Small and Island.

18d         Female invited into garden not wanting a soft soil (3)
MUD – Remove the A (not wanting a) from the name of the girl summoned into the garden in song.

22d         Push out old boy over time getting ill-mannered (7)
OBTRUDE – Put together an abbreviation for the Old Boys of a school, Time, and ‘ill-mannered’.

24d         Sketchy summary that’s not entirely accurate (6)
PRECIS – Remove the final letter (not entirely) from a word for ‘accurate’ to get this summary of a longer document.

25d         High-up person to abuse king (6)
SLATER – This person is high-up because he or she works on your roof. Another word for ‘abuse’ or ‘criticise’ followed by the Latin abbreviation for king. 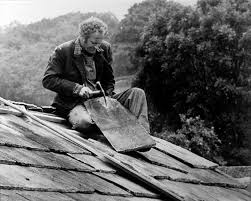 26d         Fellow getting into shelter turned up in coat (6)
ENAMEL – Start by wrapping a word for shelter from the wind around a word for a fellow. Then reverse (turned up) the result to get a coat of paint.