Good morning from South Staffs where a cloudy start to the day may lead to some showers this evening (here’s hoping). Triskaidekaphobics can return to bed now.

Nothing too difficult from Giovanni this morning, though the use of a false synonym in 1d was something which gave me pause. I liked the misdirection in 6d.

1a           Shared an understanding with shyest maid, trembling, keeping quiet (11)
SYMPATHISED – Anagram (trembling) of SHYEST MAID, wrapped around the musical symbol for quiet.

7a           City oddball, one with two females in tow (7)
CARDIFF – Put together an oddball or eccentric, the Roman numeral for one, and two abbreviations for Female, and you get a Welsh city. 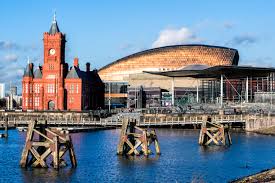 10a         Form of technology — something hard engineers initially attempt (8)
ROCKETRY – Put together something hard, the first letter of Engineers, and an attempt.

11a         Play in small country community (6)
HAMLET – Double definition, the first being a play by Shakespeare.

16a         Day of celebration with everyone needing permits to go round hospital (3,7)
ALL HALLOWS – Another word for ‘everyone’ and another word for ‘permits’, placed either side of the abbreviation for Hospital. The answer is celebrated on 1 November.

18a         That’s contemptible, having Greek character shut up (4)
PISH – One of the letters of the Greek alphabet followed by an instruction to be quiet.

22a         One telling tales in class with little hesitation (8)
INFORMER – Put together IN (from the clue), another word for a school class, and an interjection expressing hesitation.

24a         Footballer around half-time’s first person to grumble (7)
WHINGER – A position on the football field wrapped around the first letter of Half-time.

1d           Before start of December fir gets nicely dressed (7)
SPRUCED – Another word for a conifer followed by the first letter of December,  This clue doesn’t work for me, because the fir and the tree used in the answer are members of different families. ‘Conifer’ in the clue would work better.

2d           Edmund early in the morning upset lass (6)
MAIDEN – A short form of Edmund is followed by a set of letters which look like a number and the Latin abbreviation for ‘in the morning’, then the whole lot is reversed (upset).

4d           Keep secret identity when entertained by the fellow (4)
HIDE – The letters indicating identity documents are inserted into the pronoun for ‘the fellow’.

5d           With blemishes all around, America suffers (8)
SUSTAINS – A common abbreviation for America is inserted into some blemishes or dirty marks.

7d           One goes round very quickly and one’s teeth are on edge (8,3)
CIRCULAR SAW – Cryptic definition of a powered device for cutting timber. 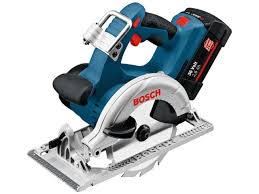 9d           Club against money demanded for police action (5,6)
BATON CHARGE – Put together a type of club used in games, a pronoun which can mean ‘against’ or ‘up against’, and the money demanded or price of something.

12d         Famous Argentinian side lifted cup — what gets those gnashers going? (7,3)
CHEWING GUM – Put together an Argentinian who is more often seen in crosswords as a revolutionary, a side (of a large house, perhaps), and the reverse (lifted up) of another word for a drinking cup. 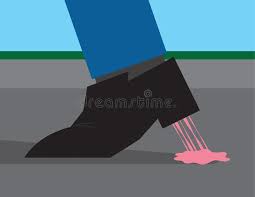 20d         Locks to secure old books? That’s silly talk! (3,3)
HOT AIR – The locks here are to be found on your head, and they are wrapped around the abbreviation for the older half of the Bible.

23d         Fast runner heading off over a field (4)
AREA – Remove the first letter (heading off) from a furry animal renowned for fast running, then add A (from the clue) to the end.