I shall be interested to see what the reaction is to today’s Giovanni. I was held up in the SW corner but still managed ** time. Others may find the Biblical references and occasional less common words producing more of a challenge.

1a           Spring garment top lady discarded (4)
JUMP – Remove the letters associated with HM the Queen, our top lady, from a woolly garment.

8a           Sort of Egyptian policeman with stick bounds off (6)
COPTIC – A familiar word for a policeman followed by (s)TIC(k) with its first and last letters removed (bounds off).

9a           Bishop to sin in famous wedding location in Aussie city (8)
CANBERRA – Put together the chess notation for a Bishop and ‘to sin’, then wrap a Biblical wedding venue (the one where water was turned into wine) around the result.

10a         Remain cheerful as listener in inn being bowled over (4,2)
BEAR UP – Reverse (bowled over) another word for an inn, then insert a bodily organ which may be described as a ‘listener’.

11a         Guide one vehicle around to face entrance (8)
NAVIGATE – Put together the Roman numeral for one and a small commercial vehicle, reverse (around) the result, then add an entrance (to a field, perhaps).

14a         Nothing for securing a collar (4)
NAIL – A (from the clue) inserted into another word for nothing (think football scores). The definition is an informal word for ‘catch’ or ‘arrest’.

18a         Set off to see sweetheart maybe outside school (8)
DETONATE – A word for when you might see your sweetheart, wrapped around the top English public school which appears regularly in crosswords.

20a         Dish youngster eats quietly behind house (6)
HOTPOT – An abbreviation for HOuse, followed by a small child wrapped around the musical symbol for ‘quietly’.

21a         Communication signal from character at back of group (8)
RINGTONE – A group or gang followed by ‘character’ or ‘style’, giving us the all too familiar sound of a mobile phone.

22a         Male like Uriah Heep to talk indistinctly (6)
MUMBLE – Uriah Heep in David Copperfield always described himself as this (complete with the missing H at the start of the word). Put Male in front, and you get the answer. 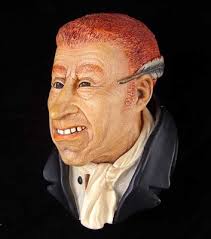 23a         Sweet container taken around and held up (10)
BUTTRESSED – Put together a seven-letter word for a sweet or pudding, add a three-letter container, then reverse the lot, to get an architectural term for ‘held up’ or ‘supported’.

24a         Native skirts round island, holy place (4)
SION – Another way of describing someone born in a particular place, wrapped round Island, to get a Biblical holy mountain.

1d           400-year-old material, account old boy’s hidden away (8)
JACOBEAN – Start with a twilled cotton cloth (denim is an example) which in the plural describes a pair of trousers made from the material. Then insert the abbreviations for ‘account’ and ‘old boy’ (of a school), to get a historical period named for the king who ruled England and Scotland at the time. 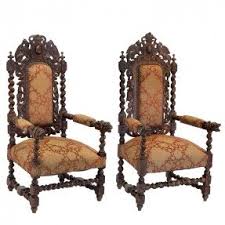 3d           Get back, using transport outside city area (9)
RECAPTURE – A transport of delight wrapped around the postcode for the city of London and Area.


7d           Bird landed finally on slope (5)
DRAKE – The final letter of landeD, followed by the sort of slope found on a stage or in the seating in a theatre.

15d         Facility of some cafés in Bury, without any charge (8)
INTERNET – Another word for ‘bury’ (ignoring the false capitalisation) followed by a commercial term for the price of something clear of any charges.

16d         Money section’s last bit in church newspaper (8)
CENTIMES – The initials of the Church of England and the name of the newspaper for which our late contributor Tstrummer worked, placed either side of the last letter of sectioN.

17d         Criticise article about building in Rome (8)
PANTHEON – Put together ‘criticise’, a definite article, and about, to get a Roman building which has (still, after two millennia) the largest unreinforced concrete dome in the world. 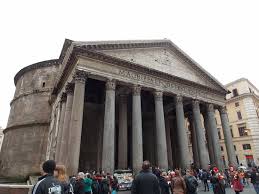 18d         Wanderer has feet keeping less wet? The opposite! (7)
DRIFTER – ‘Less wet’ wrapped around (keeping) an abbreviation for feet.

19d         Please say nothing when given Polish drink (5)
SHRUB – A two-letter instruction to ‘say nothing’, followed by ‘polish’ (false capitalisation again), giving us an alcoholic drink commonly seen in the works of Dickens, involving rum and lemons.