A touch of the ‘old’ Giovanni today, with some scriptural and ecclesiastical references and the odd bit of archaism. All accessible from the wordplay, as usual.

15a         Sailor with spots stays dry (8)
ABSTAINS – One of the usual sailors (the one who’s an able seaman) followed by some spots or marks, giving us someone who stays dry by keeping off the booze.

16a         Old country with ancient South Americans invaded by the French (6)
MALAYA – Put one of the versions of the French definite article inside some of the ancient inhabitants of Mexico (Central rather than South America) to get the former name of an Asian country.

18a         Quality of Britain admitted by the enemy (6)
TIMBRE – The dimension sometimes known as ‘the enemy’ wrapped around an abbreviation of Britain.

23a         What could make you groan at us and bark (9)
ANGOSTURA – Anagram (could make) of GROAN AT US. This is an extract of tree bark most commonly seen as a bitter flavouring in some cocktails.

26a         Stylish award for work in theatre (4)
TONY – An annual award (like an Oscar) which could be said to be style-ish, if the French word for style or fashion is used.

28a         Lots of pieces of paper to peruse, twice as many at the end (4)
REAM – Start with a word for ‘peruse’ then replace the final letter, which is a Roman numeral, with the Roman numeral which is twice as large.

29a         One bishop has little hesitation to get into affair that’s un-bishop-like! (10)
IRREVERENT – Put together the Roman numeral for one, the letters used as an abbreviation for the title of a bishop, and an affair or occurrence wrapped around a short word of hesitation.


2d           Plants found in reference books (7)
ANNUALS – Double definition: the sorts of plant which have to be grown anew every year; or some reference works updated every year. 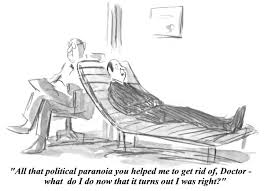 11d         Result of stress that is very undesirable for air travellers? (5,7)
METAL FATIGUE – Cryptic definition of a material failure which caused the early Comet jet airliners to fall out of the sky.

17d         Like certain swine, eager and silly (8)
GADARENE – Anagram (silly) of EAGER AND. These were the unfortunate animals in the New Testament who were the recipients of a set of demons exorcised by Jesus: they promptly rushed downhill and were drowned in a lake.

19d         Particular hue of male political worker, leader of agitators (7)
MAGENTA – Put together Male, the political worker responsible for organising an election candidate’s campaign, and the first letter of Agitators.

21d         Rock from part of UK in fireplace feature (7)
GRANITE – The part of the UK which is not GB, inserted into the part of a fireplace where the fire actually sits.

25d         When Christians celebrate a bit (4)
WHIT – Here we have an old word for ‘a bit’, generally only seen now with a negative in front of it. It is also the short form of the alternative word for Pentecost, the Christian festival 50 days after Easter. Our late Spring Bank Holiday used to carry the designation —- Monday until it was detached from the liturgical calendar and fixed as the last Monday in May.