A fair slice of GK required to solve today’s Giovanni, though the cluing is, as always, perfectly fair. This one took me longer to solve than the Toughie I blogged yesterday.

1a           It may mean junk ends up as junk! (9)
SHIPWRECK – Cryptic definition of what may cause a Chinese sailing vessel to turn into a pile of scrap.

10a         Lights by promontory shown in picture (9)
LANDSCAPE – Lights, as in ‘stops flying’ followed by another word for a promontory. 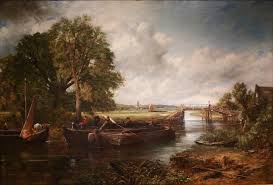 12a         Composer in Swiss city with beer mug (9)
BERNSTEIN – The Swiss city famous for its bear pits, followed by a German beer mug, giving us the composer of West Side Story and The Chichester Psalms.


13a         Article penned by a foreign Socialist is not perused (6)
UNREAD – A foreign word for ‘a’ and the colour associated with Socialists, wrapped around an indefinite article.

19a         Criticise a revolutionary for grand manner (7)
PANACHE – Put together a three-letter word for ‘criticise’, A (from the clue), and the usual crossword revolutionary.

20a         Someone who sees what you can see (7)
OCULIST – Cryptic definition of someone who assesses your eyesight.

21a         Black bird rolls over in this bundle (3)
WAD – Reverse (rolls over) a black bird notorious for snapping up shiny objects.

23a         Saint in ruin needing money (6)
MARTIN – Put together another word for ‘ruin’ or ‘damage’ and some elderly slang for ‘money’, to get the name of the patron saint of Tours. 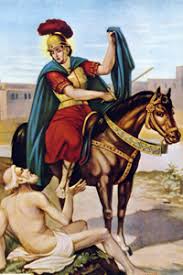 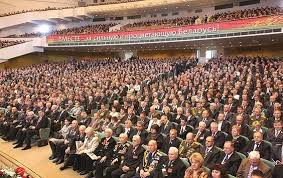 29a         Carpet material by edge and at the back (9)
REPRIMAND – Put together a corded material rarely seen except in crosswords, the edge of a glass, and AND (from the clue).

30a         Blunders made by English bishop at back of basilica (6)
ERRATA – Put together English, the initials of the title given to bishops, AT (from the clue), and the last letter of basilicA.

3d           Quiet editor, worker who pays attention to good grammar? (6)
PEDANT – Put together the musical symbol for quiet, the abbreviation for EDitor, and one of the usual worker insects.

4d           Declaim as English Conservative joining in ceremony (6)
RECITE – Insert English and Conservative into a word for a ceremony.

5d           Bill coming up — what is charged is something fanciful (7)
CAPRICE – Reverse (coming up) an abbreviation for a bill or account, then add what a seller charges a buyer.

7d           Leader of society wants fairness organised without any frills (4,5)
SANS SERIF – The first letter (leader) of Society followed by an anagram (organised) of FAIRNESS, giving us a plain and unadorned typeface, like the one used for this blog.

15d         English partygoers? They get into the groove (9)
ENGRAVERS – A slightly longer abbreviation for ENGlish this time, followed by some (possibly illegal) partygoers, giving us people whose job is to make grooves in materials. 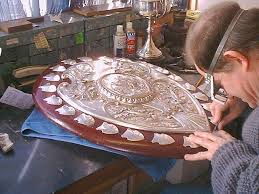 16d         With stress beginning to spread around, I had bad things happening (9)
ACCIDENTS – Another word for the stress put on a syllable when pronouncing a word, followed by the first letter (beginning to) of Spread, with the result then wrapped around I (from the clue).

22d         Irritability in an east Texas city (7)
ABILENE – Put together AN (from the clue) and East, then wrap the result around a bodily fluid, an excess of which was belied to cause irritability.


24d         Author with obstacle, not finishing (6)
BARRIE – Remove the final letter (not finishing) from a physical obstacle, to get the author of Peter Pan. 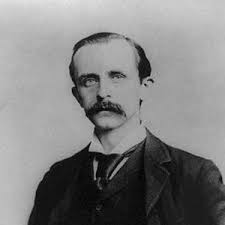 25d         Drink repeatedly being knocked over leads to grumble (6)
MURMUR – Take two instances of a strong drink which kept the Royal Navy going for many years, then reverse (being knocked over) the result.