Good morning from South Staffs, where we have a bright start to the day but the threat of rain later.

Some fairly easy anagrams gave me an entry into today’s Giovanni, and there was nothing too obscure in the rest of the puzzle, so ** difficulty for me.

4a           Little reptile exploits flowering plants (8)
CROCUSES – The shortened form of the name of a large reptile, followed by a verb meaning ‘exploits’. 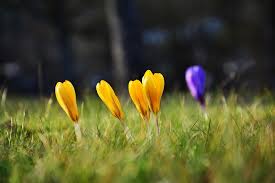 13a         Excellent department led by ace (5)
ADEPT – The symbol found on an ace in a pack of cards followed by an abbreviation for ‘department’.

14a         A live gent’s let loose, a gospel preacher (13)
TELEVANGELIST – Anagram (loose) of A LIVE GENT’S LET, giving us a preacher who uses broadcast media to spread his message.

23a         Bitterness showing by those with aspiration heading off, quick movers (9)
GALLOPERS – Another word for bitterness or bile, followed by people who have aspirations, minus their first letter. 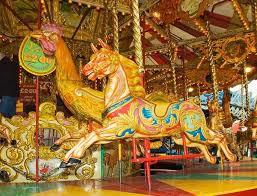 25a         One form of music and another making comeback with time (6)
GARAGE – The answer is described in the BRB as ‘a type of unsophisticated rock music’. To get to the answer, reverse (making comeback) a three-letter word for another variety of music, a highly syncopated one of black American origin, then add a period of time. I know nothing, and care less, about the type of music in the answer, so here’s a piece from the wordplay:

1d           Time young birds may be found in straw etc (6)
THATCH – An abbreviation for Time, followed by a collection of young birds from the same brood.

2d           Tricky mile trek including middle of bog? A shorter distance (9)
KILOMETRE – Anagram (tricky) of MILE TREK wrapped around the middle letter of bOg. The shorter distance definition relates back to the ‘mile’ at the beginning of the clue, making this a sort of all-in-one.

5d           Girl given payment in beastly home, brought up to be respectful (11)
REVERENTIAL – Put together a girl’s name (perhaps the one in the Garden of Eden) and a payment for accommodation. Then reverse (brought up) a wild beast’s home, and wrap it around the result.

6d           Business of transporting stuff — hard to get out of old African capital (7)
CARTAGE – Remove the Hard from an old North African city, one which fought Rome in the Punic Wars and was eventually destroyed by the Romans.

7d           Number in double figures to achieve success (5)
SCORE – Double definition, I suppose, though the first is rather vague. The second is the sort of success a footballer achieves by putting the ball into the goal.

8d           Attend match, say, in which muscle is evident (8)
SPECTATE – Another word for ‘say’ wrapped around a shortened form of a chest muscle.

12d         Economy good with people showing a redeeming quality (6,5)
SAVING GRACE – Put together the act of making economies, Good, and a people or ethnic division.

16d         Harry and Edward tinkered about (8)
POTTERED – Put together the surname of Harry the boy wizard and a short form of Edward.

18d         The female subsequently lacking a sanctuary (7)
SHELTER – The pronoun for ‘the female’, followed by ‘subsequently’ or ‘not sooner’ with the A removed.

20d         Oriental dropping off at the front gets behind (6)
ASTERN – Remove the first letter from a word for ‘oriental’ and you get a nautical term for ‘behind’,