Greetings from Ottawa where the tulips should soon be in full bloom.

Today’s puzzle is definitely not by RayT. It could have been compiled by my grandson, as the setter displays an overwhelming infatuation with Lego.

In the hints below, the definitions are underlined. The answers are hidden under the ANSWER buttons, so don’t click if you don’t want to see the answers.

5a   Eccentric Cubist framing one squashed fly? (7)
BISCUIT — anagram (eccentric) of CUBIST containing the Roman numeral for one

12a   Ignoring odd characters, upbraid maiden, being starchy (4)
PRIM — the even letters (ignoring the odd characters) of uPbRaId precede a scoreless over in cricket

14a   Muslim leader or northern Scotsman with South Americans, famously laid-back (12)
CALIFORNIANS — time for more Lego; join together a Muslim civil and religious leader, OR (from the clue), one pole of the compass, what is arguably Crosswordland’s most popular name for a Scotsman, and the other pole of the compass

18a   A rat’s tail, facial hair, suits — baggage which comes with the job? (7,5)
ATTACHE CASES — continuing with the Lego, this time we have A (from the clue), the final letter (tail) of raT, an informal name for hair on the upper lip, and suits aired in court

22a   Making exotic crouton dip (10)
PRODUCTION — anagram (exotic) of the final two words of the clue; the definition is a gerund, thus it can act as a noun

25a   What lands surfer in trouble with the law? (5,4)
CRIME WAVE — cryptic definition of activity that would draw the attention of the police

26a   Deliver  instruction for setter (5)
FETCH — instruction for a four-legged setter; presumably this is intended to be a double definition, but I think the solution means pretty much the opposite of the first definition

3d   Old boyfriend reportedly kissed Nancy heading off in hope (10)
EXPECTANCY — don’t put the Lego away yet; this time the components needed are a former boyfriend, a syllable that sounds like a synonym for kissed, and (n)ANCY with her head chopped off

6d   Espresso hogs seen in W1? On the contrary (4)
SOHO — an area of London is lurking in the clue;“On the contrary” tells us to invert the logic of the clue to get “W1 seen in espresso hogs”. It is a device used by setters to convert a nonsensical surface to something meaningful.

7d   Higher part of school taking a course ending in the spring (8)
UPSTREAM — an adverb denoting higher followed by a group of schoolchildren of the same age and ability; the spring is the source of a waterway

8d   Note butter is universal in Italian dessert (8)
TIRAMISU — Lego time again; a musical note, an animal known for using his head, IS (from the clue), and the film certificate signifying that a production is fit for all to see; not to be picky, but I was served the same dessert the last time I was here

13d   A thankyou in France not quite complete without compassion (10)
UNMERCIFUL — we’re not done with the Lego yet; a French phrase meaning ‘a thankyou’ is followed by three-quarters of a word meaning complete

15d   This person, anti-beer, unusually drunk (9)
INEBRIATE — a charade of I (this person) and an anagram (unusually) of ANTIBEER; the definition could be either a noun or an adjective, although the latter (in this form) is now rarely seen

16d   Rising air force commander a liberal? That’s absurd (8)
FARCICAL — yet more Lego; a reversal of the abbreviation for the British air force, a short commander-in-chief, A (from the clue) and L(iberal)

19d and 28a   Clever wordsmith lacking son and heir initially becomes unbeliever? (6,7)
VICTOR MELDREW — an anagram of the first two words of the clue after S(on) and H [H(eir) initially] have been removed gives us a bitter and complaining old man famous for his catch phrases “I don’t believe it!” and “Unbe-lieeeve-able!”; solving this clue was aided by the fact that the two parts of the solution intersect narrowing the choice of intersecting letter to one of two 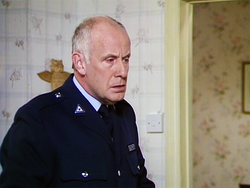 20d   A New York attention-seeker with wife here, there and everywhere (6)
ANYHOW — we haven’t exhausted the Lego yet; A (from the clue), the abbreviation for New York, an exclamation used to call for attention, and W(ife); you can now safely put the Lego blocks away

24d   Central part in Andromache, Ronsardian protagonist (4)
HERO — we finish off with a lurker, in which the central character is attempting to conceal himself in the somewhat unusual juxtaposition of a classical Greek tragedy by Euripides and an adjective relating to a 16th century French poet

As my favourite clue today, I will go with the grumpy old man at 19d and 28a. Although I was totally unfamiliar with this British television programme, I did manage to decipher the clue from the wordplay. Seeing that Kath is away today, I could probably get away with picking a second favourite — but I will forgo the temptation and behave myself (in case she checks up on me later).

An unresolved problem with the comments on this post caused the website to fail. This is a cloned copy of the post and I have moved all of the comments across.