Good morning from South Staffs where the wind is howling round the house.

I found today’s Giovanni pangram quite difficult, with the last couple of four-letter answers pushing my time well towards the top of my *** difficulty range. As usual, there are some unfamiliar terms and some of the General Knowledge required may test our overseas contributors.

1a           Collapsed, having lost spark in performance (8)
DEFLATED – A word for a performance or action wrapped around an adjective describing something (champagne?) which has lost its sparkle. 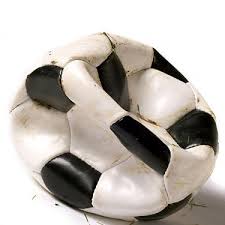 9a           Way-out assessment at election time (4,4)
EXIT POLL – Cryptic definition of the process involved in asking a sample of voters how they voted as they emerge from the vote.

10a         Base character in Shakespeare play (6)
BOTTOM – Double definition, the second being one of the rude mechanicals from A Midsummer Night’s Dream. 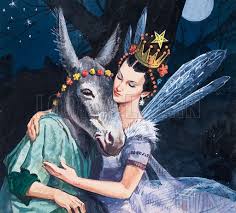 12a         One dying in his ship‘s hold (6)
NELSON – Double definition: an English admiral who fell in battle aboard his flagship; or a wrestling hold.

16a         Leader falling off step — one on the floor? (4)
TILE – Remove the initial S from a step over a wall in the country, to get something which may be used to cover the floor of a house.

20a         Man desperate for food taking some of the sausages (4)
ESAU – The Old Testament character who sold his birthright to his younger twin brother Jacob in return for a mess of pottage: he’s hidden in the clue.

25a         Fellow finally achieved an eminence as issuer of orders (8)
MANDATOR – Put together a fellow or chap, the last letter of achieveD, A(n) from the clue, and an eminence to be found on Dartmoor, for example.

28a         Shrew in need of taming interrupted by a king in unarmed combat (6)
KARATE – A (rom the clue) and the Latin abbreviation for king, inside the female protagonist from Shakespeare’s play.

29a         Inveterate and bluff king keeps somewhat unfriendly at first (8)
HABITUAL – An expression (1,3) meaning ‘somewhat’ and the first letter of Unfriendly, placed inside the short form of the name of the English king to whom the adjective ‘bluff’ has often been applied.

30a         Hesitation about stage act coming back (6)
RETURN – Reverse (about) a hesitation word, and add a stage act, especially in a variety show.

31a         Raise bird for laying eggs with number inside (8)
HEIGHTEN – The bird usually kept for egg production wrapped around the written-out form of an integer.

2d           Quite an insect that seems to have breathed! (6)
FAIRLY – … because what you take in when you breathe is found inside a variety of insect.

3d           A very quiet ramble daughter agreed to (8)
APPROVED = Put together A (from the clue), the musical symbol for ‘very quiet’, a verb for ramble or wander, and an abbreviation of Daughter.

4d           Jazz singer offers uplifting ‘Alleluia’, not half! (4)
ELLA – Remove half of ‘Alleluia’ and reverse the remainder.
ARVE Error: need id and provider

7d           Characters in riot fret about something modern being introduced (8)
RETROFIT – Anagram (about) of RIOT FRET.

8d           Academic course seems terrible? Cut period of learning! (8)
SEMESTER – This academic course, or the period over which it is taught, is made up of an anagram (terrible) of SEEMS followed by an academic period with its final letter removed.

14d         Fair had success after being set up very recently (4,3)
JUST NOW – A word meaning fair or right followed by the reversal (set up) of a verb meaning ‘had success’.

17d         Ward nurse perhaps bringing glass, interrupted by doctor turning up (8)
BEDMAKER – One of the sets of letters which a medical doctor may have after his or her name, reversed and placed inside a glass or pottery drinking vessel.

18d         Knight or a pair of knights in French headgear? (8)
BANNERET – Two examples of the chess notation for a knight, placed inside an item of headgear traditionally worn by Basques, and by stereotype Frenchmen in English cartoons. The result is a historical term for a higher-grade knight, with other knights under his command on the battlefield.

22d         Loud performer that has to be taken into account (6)
FACTOR – The musical symbol for loud followed by a stage performer.

23d         Female learner and relation in parade (6)
FLAUNT – Put together Female, the symbol for a learner driver, and a female relative, to get a verb meaning ‘parade’ or ‘show off’.

24d         Garment on middle of bench pinched (6)
STOLEN – A garment worn around the shoulders followed by the middle letter of beNch.

27d         Feature on map indicated by blue or red pigment (4)
LAKE – Double definition: an inland feature conventionally coloured blue on a map; or a red pigment, which was always preceded by ‘crimson’ in the paintboxes of my childhood.

I hope to see some of you at the Birthday Bash tomorrow.