Good morning from South Staffs on an autumn morning which started misty but is now beautifully sunny.

A fair workout from Giovanni this morning, with some nice penny-drop moments. 14a was the last one in for me.

8a           Police department brings in lots — all about to become vigorous (7)
DYNAMIC – Put a word for lots inside the acronym for the police department which investigates crime, then reverse the lot (all about).

11a         Soft corrosion on something tiny (6)
PROTON – Put together the musical symbol for soft, a form of corrosion, and ON (from the clue) to get a subatomic particle.

14a         Pole swinging close by flower? (7-3)
FISHING-ROD – A cryptic definition of the sort of pole which might be wielded next to a flowing river.
ARVE Error: need id and provider

16a         Teacher comes to fancy hotel — a place for buns (6,4)
RABBIT HOLE – A Jewish teacher followed by an anagram (fancy) of HOTEL. The buns in question are furry, with long ears and a fluffy tail. 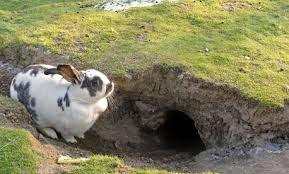 18a         Get a divining rod (4)
TWIG – Double definition: an informal word for get or understand; and the literal description of a divining rod.

21a         Latest report to give time when Oxford term will start? (6)
UPDATE – Given that students come down from Oxford at the end of term, this could be the day that term starts.

22a         Coffee offering energy, thus crowd’s imbibed (8)
ESPRESSO – Energy, followed by a word for thus wrapped around a crowd or throng. 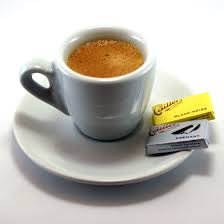 24a         Men on street taking time to find safe accommodation (7)
STORAGE – Put together an abbreviation for STreet, the acronym for soldiers who are not officers, and a long period of time.

25a         Fashionable to have very limited language? The opposite (7)
INVERSE – The usual crossword term for fashionable, followed by Very, and an alternative name for Scots or Irish Gaelic.

26a         Awfully tired intellectual becomes harmful (11)
DETRIMENTAL – Anagram (awfully) of TIRED followed by another word for intellectual, as opposed to physical.

1d           Reticent to swallow drop of liquid? It’s producing flatulence (7)
COLICKY – A small amount of liquid, often used in conjunction with ‘of paint’, inside a word for reticent or shy.

4d           Daughter hugged by proper dandy (4)
DUDE – An abbreviation for Daughter inside a word for proper or fitting.

5d           Uneducated drunk ranting about nothing (8)
IGNORANT – Anagram (drunk) of RANTING rapped around the letter which looks like zero.

6d           Goddess encountered in grass, rolling over (7)
DEMETER – Reverse (rolling over) a type of grass, and insert a word for ‘encountered’, to get the Greek goddess of the harvest. 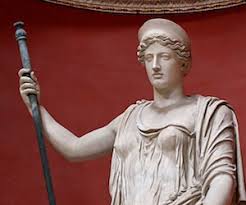 7d           Mistake over kiss? One would have been shot! (11)
BLUNDERBUSS – A mistake or gaffe, followed by an archaic word for a kiss, giving a variety of firearm.

12d         Little fellow with one stone in battle ultimately accounting for him? (10)
PHILISTINE – The whole clue refers to the story of David and Goliath, and the answer is the tribe or people that Goliath belonged to. Put together a shortened form of a man’s name, the Roman numeral for one, an abbreviation for STone, IN (from the clue), and the last letter (ultimately) of battlE.

15d         Divert a short distance round overturned vehicle (8)
DISTRACT – Reverse (overturned) an agricultural vehicle and insert it into an abbreviation for DISTance.

20d         Cold artist against a tie — that is unwanted item of neckwear (6)
CRAVAT – Put together Cold, the usual crossword artist, the letter which means ‘against’ in a list of football fixtures, A (from the clue), and T(ie) with the Latin abbreviation for ‘that is’ removed.

23d         One in street sharing something with a neighbour (4)
SEMI – A cryptic definition of a property which is not entirely separate from its neighbour.