Good morning from the Domaine de la Paille Basse in the Dordogne on a bright, sunny but chilly morning.

I found today’s Giovanni to be at the gentler end of his spectrum, though with the usual element of General Knowledge required.

9a           Peer in uniform (5)
EQUAL – Double definition: someone who is one of your peers; or a description of things that are uniform.

10a         Stars in situation with no possibility of fire, we hear? (5,4)
GREAT BEAR – This constellation sounds as if it might be a fireplace with nothing in it. 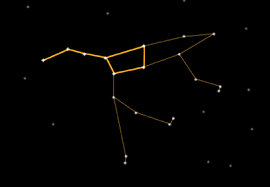 11a         Unfamiliar street to an extent (7)
STRANGE – Abbreviation for STreet followed by an extent of ground or goods.

12a         Enthusiastic approval and praise? Outside it’s hollow (7)
PLAUDIT – Another word for praise with a hollow in the ground wrapped around it.

13a         Devoted Left wanting our top family’s leader to go (5)
LOYAL – Left followed by the Windsors with their first letter removed.

14a         Note provided by accomplice in the fewest possible words? (9)
MINIMALLY – A musical note twice the length of a crotchet followed by an accomplice or sidekick.

16a         Leicester roughs on the rampage in the county (15)
GLOUCESTERSHIRE – Anagram (on the rampage) of LEICESTER ROUGHS.

19a         Lots of you taken to ship and given shelter (9)
THOUSANDS – An old word for you followed by the usual crossword ship with AND (from the clue) inside it.

23a         Wild animal‘s flesh? There’s hesitation by king to tuck in (7)
MEERKAT – Put a hesitation and the chess notation for a king inside another word for flesh, and try not to think about car insurance adverts!

28a         Three of them may be used in emergency (5)
NINES – Cryptic definition of the number used in the UK to call the emergency services.

1d           Workers as second-rate characters? (4)
BEES – Double definition: the usual crossword workers; or the spelling out of a set of the second letter of the alphabet.

6d           Walkway in Athens in which animal loses tail (4)
STOA – Remove the final letter from a relative of the weasel to get a covered walkway in ancient Athens which gave its name to the school of philosophers which met there. 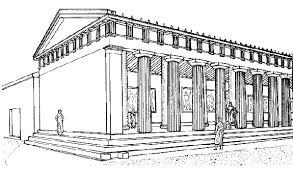 8d           Almost what Derbyshire dressers aim for? (6,4)
PRETTY WELL – In towns and villages in Derbyshire the inhabitants make pictures or designs by pressing flower petals into a clay base, originally to adorn the place where they drew their water, and if you adorn a water source, you could get this expression meaning ‘almost’. 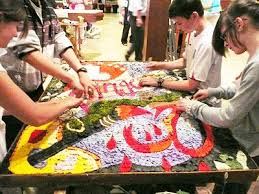 15d         Maiden is leading supporting song, creating trouble (10)
MISFORTUNE – Put together the cricket abbreviation for a maiden over, IS (from the clue), a word meaning supporting or in favour of, and a song or melody.

17d         Song that’s old and almost completely glum, I love! (1,4,3)
O SOLE MIO – Put together Old, a word for glum or serious with its final letter removed, I (from the clue) and the letter which looks like a love score at tennis, to get this staple of the Italian tenor’s repertoire.

18d         Authorise second undertaking with any number joining in (8)
SANCTION – Second plus a deed or undertaking, with the algebraic symbol for any number inside it.

20d         Partner thus getting employment, collecting pence (6)
SPOUSE – A word for ‘thus’ and employment or utilisation, with the abbreviation for Pence inside .

22d         Father, losing heart completely, has looks of disapproval (6)
FROWNS – Remove all the inside letters from FatheR and add a word for ‘has’ or ‘possesses’.

24d         Item of clothing left buried by equipment (4)
KILT – Ageneral word for gear or equipment with Left inside it.

Off to visit the Gouffre de Padirac now, so won’t be around to answer any comments.