Good morning from South Staffs on a beautiful sunny morning which is forecast to lead to the warmest day of the year so far.

We have a pangram from Giovanni today, which I found quite tricky – well into *** time, with 22d last in. Having said that, when I’d finished it, I wondered why it had taken so long.

1a           Illumination needed, peacekeepers being involved in insult (8)
SUNLIGHT – Another word for an insult wrapped around the initials of the international organisation which can send out peacekeeping forces.

10a         Quiet prayer exuding love in place with chaplain? (6)
PRISON – The musical symbol for quiet followed by an archaic word for prayer with the initial O removed (exuding love).

12a         Deal unwisely in public, getting what’s dear, terribly (9)
OVERTRADE – A word for open or in public, followed by an anagram (terribly) of DEAR.

13a         Sound bringing tingle, hard to miss (5)
TRILL – Remove the H(ard) from a tingle or sensation to get a musical sound.
ARVE Error: need id and provider

14a         Last character to come to a particular area (4)
ZONE – The last letter of the alphabet followed by a word meaning ‘a particular’.

19a         Winger in side cross and reported for being ‘agitated’ (7)
EXCITED – Put together the last letter (winger) of sidE, a cross-shaped letter, and a word for reported or quoted.

27a         A second kitchen item gone missing (6)
ASTRAY – Put together A (from the clue), Second, and something from the kitchen which could be used to serve breakfast in bed.

28a         Workers catching bus set out to be old-style breadwinners? (8)
HUSBANDS – Anagram (set out) of BUS inside one of the words for workers.

29a         Surpass the has-been tennis player, by the sound of it? (6)
EXCEED – A prefix denoting former or has-been, followed by what sounds like one of the tennis players expected to do well in a tournament.

30a         Yours truly having a fantastic feast? Food may come from here (4,4)
MEAT SAFE – A pronoun for ‘yours truly’ followed by A (from the clue) and an anagram (fantastic) of FEAST, giving somewhere food might have been kept in the days before refrigeration.

3d           Clumsy in gym, grabbing end of horse (5)
INEPT – The final letter (end) of horsE placed between IN (from the clue) and the initials of another way of describing gym lessons at school (no, not ‘cruel and unusual punishment’!).

6d           Revolver with something groovy on it? (9)
TURNTABLE – Cryptic definition of a device used to play recorded music when a lot of the readers of this blog were much younger. 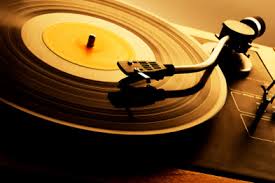 8d           Finish with trick element in crossword, word finally being nailed (8)
CONCLUDE – A word for trick or cheat, followed by the element of a crossword which is set out in the line above, with the final letter of worD inserted.

11d         Old King of France’s game spanning hours (4)
JEHU – An old king of Israel reputed to be a fast chariot driver is made up of the French word for game wrapped around Hours. 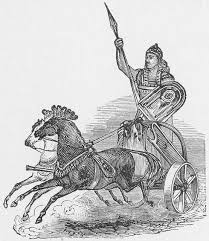 15d         From which you could get a Ted from a previous era (3,2,4)
OUT OF DATE – This is a reverse anagram, in that the answer contains the anagram indicator and the fodder, while a possible answer ‘a Ted’ is in the clue. 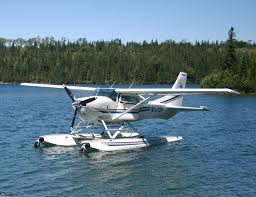 21d         Anguish brought by run going up over river (7)
TORTURE – A running gait, but not as fast as a canter, reversed (going up), followed by a river in North Yorkshire.