This is enjoyable but not too much of a stretch. I’m not keen on 17d and one of the homophones seems very dodgy to me. Do let us know what you thought of the puzzle and how you fared.

If my hints fail to point you in the right direction you can cheat and see the answer by highlighting what’s concealed between the brackets under the clues.

1a Leak stopped by retired lawyer in adventure (8)
{ESCAPADE} – reverse (retired) the abbreviation for a US public prosecutor inside a leak (of gas, say).

5a Leap a risky proposition, we hear (6)
{GAMBOL} – this verb to leap or frolic, often associated with young lambs, sounds like a risk or speculation.

9a Complain freely with volume down? (5,3)
{SOUND OFF} – double definition, the first a phrasal verb meaning to rant and rave.

10a Rick beginning to recuperate in country (6)
{SPRAIN} – insert the first letter of R(ecuperate) into a European country.

12a Festivity containing posh cooked meat in country (9)
{GUATEMALA} – a festivity or public celebration contains a) the letter used to describe someone or something posh or upper-class and b) an anagram (cooked) of MEAT.

14a Satirical work lacking any money? That’s not new (4)
{SKIT} – start with an informal word meaning lacking money or broke and take away the N(ew).

16a Gentleman taken aback by German dish (7)
{RISOTTO} – if you’ve never seen a variant of this clue before then you must be fairly new to cryptic crosswords. Reverse (taken back) the title given to a gentleman and add a common German male forename (not Hans, the other one).

19a Slate a revolutionary style (7)
{PANACHE} – a charade of a verb to slate or criticise severely, A (from the clue) and Crosswordland’s favourite Argentinian revolutionary.

21a Something carrying current and old message (4)
{WIRE} – double definition, the second a mainly transatlantic word for that old form of message, the telegram.

24a Tea provided by sailor in mess (5)
{CHAOS} – an informal word for tea is followed by the abbreviation for an ordinary seaman.

27a One cadging food in pub (6)
{BEGGAR} – put an item of food (as produced by the homophone in 11d) inside another word for pub.

28a Lofty figure from Scottish mountain defending a European (8)
{BEANPOLE} – a Scottish word for a high mountain contains (defending) A (from the clue). After that we need a European national.

29a Turn over books penned by judge (6)
{ROTATE} – put the abbreviation for some books of the Bible (the ones full of begetting and smiting) inside a verb to judge or evaluate.

1d Points on token to get flag (6)
{ENSIGN} – two cardinal points are followed (on, in a down clue) by a token or symbol.

2d Cat in cargo unloaded around bend (6)
{COUGAR} – this is what our transatlantic cousins call a puma. It’s an anagram (unloaded?) of CARGO containing a type of bend common in our domestic plumbing arrangements.

3d Father connected ultimately with military outfit? (5)
{PADRE} – this is a super all-in-one clue where the whole clue is the definition. String together an affectionate term for father, the ultimate letter of (connecte)D and the abbreviation for the sappers. 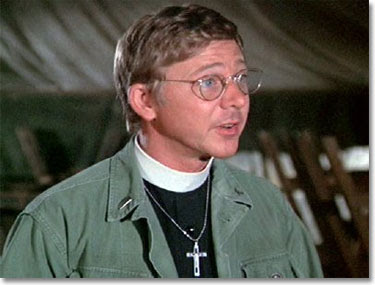 4d Notes found on Scot featuring in paper being bold (7)
{DEFIANT} – two musical notes are followed by what most Scottish men are called in Crosswordland inside the abbreviation for the pink paper.

7d Drinking venue flanking independent hotel in French resort (8)
{BIARRITZ} – a place where drink may be purchased contains (flanking) I(ndependent). After that we want the name of a posh hotel (there’s one in various cities including London and Paris).

8d Formal fare produced by a French church in Spanish city (8)
{LUNCHEON} – a French indefinite article and an abbreviation for church both go inside a city in northern Spain.

11d Noise of hen in animal enclosure (4)
{LAIR} – this enclosure where a wild animal lives may sound to some ears (but not mine) like a hen.

15d Thrills needed on sharp sudden impulse (4-5)
{KICK-START} – an informal word for thrills followed (on, in a down clue) by an adjective meaning sharp or acid in taste.

17d Source of room with keys? (5,3)
{SPACE BAR} – this cryptic clue doesn’t really work for me. If you’re typing something and you want to make room or insert a gap between two words, say, which of the keys at your disposal would you use to produce it?

20d Advantage shown in financial document when uncovered (4)
{EDGE} – start with a document containing financial accounts and take off (uncovered) the two outer letters (coincidentally the left and right letters!).

21d Review immediately heard and promoted (5-2)
{WRITE-UP} – a homophone of an adverb meaning immediately or exactly (as in ‘the snooker hall is immediately opposite’) followed by another word for promoted (a lower league football club finishing top of its division, say).

22d Greek island associated with a savoury snack (6)
{SAMOSA} – a Greek island followed by A gives us this tasty triangular snack.

23d Record-holder‘s a bit of a jumper (6)
{SLEEVE} – double definition – what you used to (and may still) use to protect your LPs and part of a jumper or other upper garment.

I liked 23d and 26d today but my gold medal is awarded to 3d. Which ones hit the spot for you?