Fewer anagrams than usual from Giovanni this morning, but the usual sprinkling of classical and biblical references.

7a           The old woman had briefly organised one Indian lady (8)
{ MAHARANI } Put together an informal term for the person often known as the old woman; HA(D) from the clue with its last letter removed (briefly);  a verb meaning organised; and a Roman numeral for one. The result is a female member of Indian royalty. 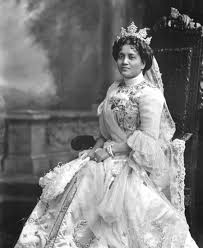 9a           One deciding to leave country before catching plane (6)
{ ÉMIGRÉ } A poetic word for before with a Russian fighter jet inside it.

10a         Barbarian got down with army heading west (6)
{ ATTILA } ‘Got down’ (from a train, for example) followed by the initials of our reserve army, all reversed (heading west) to get a leader of the Huns. 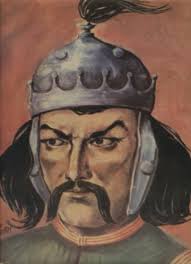 11a         Establishes companies, initiated by trick (8)
{ CONFIRMS } A trick or cheat followed another word for companies. There is a typo in the clue in the paper and online versions which I have corrected here.

20a         This being put on should ensure more than just a warm reception (7,7)
{ CENTRAL HEATING } Cryptic definition of a system which warms more than just the reception room in a house.

23a         Gross female prisoner having angry words (8)
{ FLAGRANT } Female and one of the usual prisoners, followed by a stream of angry words.

25a         Descend in plunge, concealing hesitation (6)
{ DERIVE } Put a two-letter hesitation inside a word for plunge.

27a         Very small star, about four, seen to be lively (6)
{ VIVACE } An abbreviation (small) of Very and a star performer, either side of the Roman numeral for four, giving a musical term for lively.

2d           Fellow in charge penning article that’s mad (6)
{ MANIAC } Another word for a fellow or chap, followed by an abbreviation for ‘in charge’ with an indefinite article inside it.

5d           Chemical substance obtainable from isocline (8)
{ SILICONE } Anagram (obtainable from) of ISOCLINE. Much used for cosmetic implants: I shall resist the temptation to illustrate!

6d           Daringly innovative parent with home in a mess (10)
{ PROMETHEAN } Anagram (in a mess) of PARENT and HOME. The reference is to the Greek myth about the chap who stole fire from the gods. 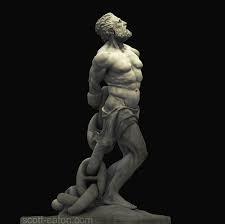 13d         Drink on select island — bar entrance with this maybe? (10)
{ PORTCULLIS } A fortified wine followed by a verb meaning to eliminate selectively, and an abbreviation for island. 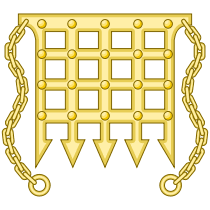 14d         College learner follows Conservatives, avoiding extremes (5)
{ ORIEL } An Oxford college is produced by removing the first and last letters from a term often used to describe the Conservative party, and adding a Learner.

16d         Letters presenting a unified image? (8)
{ MONOGRAM } Cryptic definition of a set of letters interwoven into one.

24d         Old books turned up, your writer providing one volume (4)
{ TOME } Reverse the usual old books, and add the pronoun by which the setter might describe himself.