This Giovanni puzzle is about as straightforward as it gets on a Friday but he has given us some cracking clues (and one that doesn’t work). Let us know how you got on.
If you want to see an actual answer you’ll have to highlight the gap between the brackets under the clues. There are some pointers in the FAQ to how you can achieve this if you’re accessing the blog from a mobile device.

1a  Word describing acid hermit, no saint (6)
{ACETIC} – remove the S (no saint) from a person who follows a solitary and austere way of life.

5a  Duty has changed with king being guarded for 24 hours (8)
{THURSDAY} – an anagram (changed) of DUTY HAS with one of the single-character abbreviations for king being inserted.

9a  Oxford types eventually giving opportunities to ambitious youngsters? (4,4,5)
{DEAD MEN’S SHOES} – these Oxford types are sorts of footwear and the phrase refers to positions in an organisation that may only be filled by younger people when the current incumbents retire (or die).

12a  Sailor with raincoat that may get run over by car (6)
{TARMAC} – a charade of a nickname for a sailor and an abbreviation for a raincoat.

14a  Take away area for vehicle to reverse on (8)
{SUBTRACT} – a public service vehicle gets reversed ahead of a large area of land.

16a  Susan collects watch maybe when retiring, being honourably discharged (8) (paper clue)
{EMERITUS} – this all seemed fine when I solved it (an abbreviated form of Susan containing what a watch is an example of, all reversed). It was only when I came to write the hint that I realised that it doesn’t work – proof that you see what you expect to see.

16a Retired Australians conducting strange rite (8) (amended clue on-line)
{EMERITUS} Some Australian birds with an anagram (strange) of RITE inside.

19a  Religious leader, one installed in new chapel not English (6)
{CALIPH} – an anagram (new) of CHAP(e)L without the E(nglish) has I (one, in Roman numerals) installed inside it.

21a  What may give some partners no rest (6)
{SNORES} – superb semi-all-in-one where the definition is the whole clue and the answer is hidden (some).

23a  Some birds showed aggression to others (8)
{BITTERNS} – when these birds are split (3,5) you get a phrase meaning attacked seabirds.

25a  Repeated noise from ranter, bore I’ve beaten up! (13)
{REVERBERATION} – an anagram (beaten up) of RANTER BORE I’VE.

26a  Most pure little man facing trial (8)
{CHASTEST} – this superlative seems somewhat clunky and I’m not sure that it would ever be used in practice. Start with an abbreviated forename (that of the heir to the throne, perhaps) and add a trial or examination.

27a  Sportsperson‘s message against making UK republic (6)
{KEEPER} – this is a footballer or cricketer with a specific role. If you split it (4,2) it could be a  slogan used by monarchists in the UK. 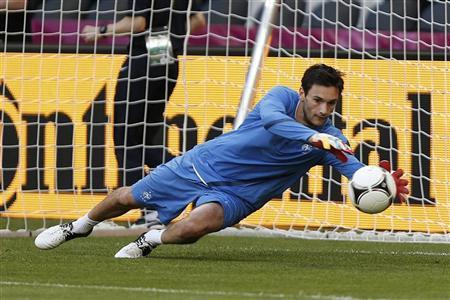 2d  Mark called around to entertain this writer (7)
{CEDILLA} – this is a mark written under the letter C in some French words to indicate that it should be pronounced as an S rather than a K (it’s also used in various other languages, notably Turkish). It’s an anagram (around) of CALLED containing the subjective pronoun which the setter would use to refer to himself.

5d  Worker with little power in time is becoming so much the worse (4,3)
{TANT PIS} – this is a phrase, from French, meaning so much the worse. In the same way that coup de grâce gets rendered humorously as lawnmower this phrase could be translated as ‘aunt is taking a comfort break’. Insert the usual working insect and P(ower) between T(ime) and IS (from the clue).

6d  At university group creates disorder (5)
{UPSET} – the adverb meaning at university is followed by a synonym for group or clique.

7d  Don’s cruel, wicked, nasty bit of work (9)
{SCOUNDREL} – Giovanni is surely not referring to himself with this anagram (wicked) of DON’S CRUEL.

13d  Foreign noblemen are cemetery vandals maybe! (9)
{MARGRAVES} – these German noblemen when split (3,5) could mean to inflict damage on parts of a cemetery.

17d  Grumble, needing to remove a roguish head of state (7)
{MONARCH} – a charade of a verb to grumble with the A removed and an adjective meaning roguish or artful.

18d  It’s liable to be a part of the curriculum (7)
{SUBJECT} – double definition, the first an adjective meaning liable or likely to be affected by.

24d  Priest coming down on the heartless people of superior status (5)
{ELITE} – an Old Testament priest precedes (coming down on, in a down clue) T(h)E (heartless, i.e. without its middle).

My favourite clues today were 21a, 27a and 7d. Which ones tickled your fancy?