Today is Friday the Thirteenth so was this to be an omen for a devilishly difficult puzzle? Well not really – this one is well towards the easier end of Giovanni’s range, although as usual a little bit of general knowledge is very helpful. I can’t say that I enjoyed it a great deal, but I’d like to hear your views.
If you need to see an answer just highlight the space between the curly brackets under the clues – if you’re using a hand-held device then some assistance on how to do the revealing can be found in the FAQ.

7a  Naughty and not run after, we hear? (8)
{UNCHASTE} – the opposite of pure and virtuous sounds (we hear) as though it means not pursued.

9a  Gosh, an honoured member is in the valley! (6)
{COOMBE} – this word for a short deep valley can be seen (with some variations in spelling) in a number of place names (such as Ilfracombe). It’s a charade of an exclamation like gosh! and someone who has appeared in the Honours List.

11a  Not completely clean clothes needed for hobbies (8)
{PURSUITS} – string together an adjective meaning clean or flawless without its final E (not completely) and formal clothes to make hobbies or pastimes.

12a  Clown playing with a rock band, famous travellers from across the Atlantic (6,3,5)
{ALCOCK AND BROWN} – the names of two British aviation pioneers who made the first non-stop transatlantic flight come from an anagram (playing) of CLOWN and A ROCK BAND.

15a  Put money in machine, maybe, parking? Help! (4)
{PAID} – the abbreviation for parking is followed by a synonym of help.

17a  Restrictions in no-go areas (5)
{REINS} – these restrictions, on a horse for example, appear when you remove the letters G and O from a word meaning areas or districts. There really ought to be some indication that the letters to be removed are not contiguous in the original word.

23a  Involuntary action that leads to a blessing? (8)
{SNEEZING} – cryptic definition. Bless you!

25a  Irish peninsula’s wooded hollow (6)
{DINGLE} – a word for a wooded hollow or valley is also the name of a peninsula on the far West coast of Ireland.

27a  Raider at sea makes very good speed (6)
{PIRATE} – an abbreviation meaning very good (in a holier-than-thou manner) and a synonym for speed come together to make a raider at sea.

1d  Old emperor in plain car (4)
{INCA} – the supreme ruler of an old South American people is hidden in the clue.

2d  Get hot wandering around slum area? (6)
{GHETTO} – an anagram (wandering around) of GET HOT produces a run-down quarter normally inhabited by a minority group.

3d  Guard given sly look when turning up (4)
{KEEP} – if you reverse (turning up, in a down clue) a sly or furtive look you get a verb to guard or protect.

4d  Mark on sailor was something symbolically sacred (6)
{SCARAB} – this is a dung-beetle, regarded as sacred by the ancient Egyptians. Put the mark left by a wound in front of (on, in a down clue) one of the abbreviations for a sailor. 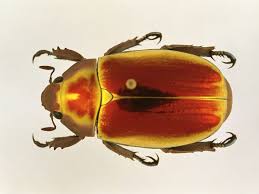 5d  What’s no use, old, terribly lumpy (8)
{NODULOSE} – an anagram (terribly) of NO USE OLD means lumpy or swollen.

6d  Bet on saint being drunk? Not if he practises this (10)
{ABSTENTION} – an anagram (being drunk) of BET ON SAINT.

8d  A clerk’s dreadful person who doesn’t work hard enough (7)
{SLACKER} – an anagram (dreadful) of A CLERK’S gives someone who doesn’t pull his weight.

14d  Song in North America making money for Nigerians (5)
{NAIRA} – I didn’t previously know what the Nigerian currency was called but the wordplay makes it straightforward to find out. Insert a song or melody in N(orth) A(merica).

16d  Fantastic view in cart that may go up to house (8)
{DRIVEWAY} – an anagram (fantastic) of VIEW goes inside the sort of cart that used to be used to deliver barrels of beer to make the approach to one’s ancestral pile.

18d  Strong American line gets mark of 10/10 (7)
{SOLIDUS} – this is the second appearance this week for this word (after Wednesday’s Toughie). A synonym for strong or sturdy precedes one of the abbreviations for American to make the line or mark appearing in the clue.

21d  A pit’s chemicals (6)
{AMINES} – these chemicals are organic compounds derived from ammonia. A is followed by a synonym of pit plus the ‘S.

22d  Managed to have party with a thousand controlled? No (6)
{RANDOM} – this adjective means the opposite of controlled, i.e. arbitrary or unsystematic. A verb meaning managed is followed by the usual Crosswordland party (festive rather than political) and the Roman numeral for a thousand.

24d  Very influential people in the gallery (4)
{GODS} – double definition, the second being an informal term for the gallery (i.e. the cheapest seats high up at the back) in a theatre.

The clue I liked best today was 28a. How about you?