Libellule is taking several weeks off from blogging as his wife is in hospital having a a major operation.  We all wish her well and hope she has a speedy recovery.
Meanwhile, Digby has stepped up to the plate and will be here for at least the next few Mondays.  BD

Thanks for all your messages of support on Friday. Having had the weekend to recover here we go again, this time with a Rufus.

The observant ones amongst you might have noticed that my Gravatar (the picture over there >>>) has changed recently to a Buccaneer coming towards you at about 600mph. It’s the jet that Rufus (almost) and I used to fly from aircraft carriers, so it’s a real treat to be able to review one of his puzzles. His crosswords always provide a mixture of challenge and amusement, and this one is no exception – how does he manage to keep up the standard time after time?

Maybe getting up early meant that my brain wasn’t quite in gear, but I found one or two clues a little tenuous – but what do you think?

11a         His enemies got fatally jarred (3,4)
{ALI BABA} I always think of laundry baskets, rather than jars, when picturing this mythical character, though in fact he did for most of his two-score victims by pouring boiling oil over them in jars.

12a         They’re not static water towers (4)
{TUGS} Mild deception here, as these towers are vessels that pull things.

13a         Canine tooth one has right in the centre (5)
{CORGI} Déjà vu or what? This word popped up on Saturday, and this time it is clued by taking the tooth of a gearwheel, I (one) and inserting R(ight) in the middle to arrive at our familiar little dog.

14a         In the course of a lacklustre comeback (4)
{AMID} This word is defined in the first 4 words of the clue, and constructed by A followed by the opposite to lack-lustre (or “a bit thick”) reversed.

17a         Cast rugby player in Shakespeare part (7)
{SHYLOCK} Beware ladies, but this is the sporting clue. Combine cast, as in throw, with the player wearing the No 4 or 5 shirt and we get this well-known moneylender. 18a         Sauce label for company (7)
{TABASCO} Break this piquant sauce down into label (3), a two-letter word meaning for and the abbreviation for company (2)

22a         It is used for duplicating clients’ letters (7)
{STENCIL} Just like buses we have another anagram, using the letters of CLIENTS to make something used to draw a copy.

24a         Trial run in theatre (4)
{HEAT} One of the preliminary races at an athletics event is hidden in the final word of the clue.

25a         Infant beginning to learn confused sounds (5)
{BABEL} An infant in arms plus L(earn) gives a word meaning a brouhaha of noise. I usually spell this word with an extra consonant in the middle, but this version is also acceptable.

30a         Incorrect in angle? (7)
{LEANING} A trademark Rufus clue IMHO. Another anagram (incorrect) of IN ANGLE gives us a wording meaning something that that was meant to be perpendicular being a few degrees out. 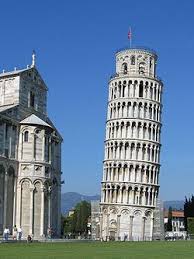 31a         Showing signs of fight? (6-7)
{BATTLE-SCARRED} Cryptic definition of how one might look after having been in the wars

2d           Flowers, say, gone astray (7)
{NOSEGAY} Another one for all you anagram fans – SAY GONE (astray) combines to create this small bunch of flowers.

4d           Give the sack to a priest, outcome of fun and beat music? (7)
{UNFROCK} This term applies to what the Church does to priests who have been very naughty. An anagram (outcome) of FUN followed by the first R of R&R music.

5d           Checker of drawing (7)
{DRAUGHT} Double definition – a counter in a well-known board game, and the (alternative spelling?) of the initial sketch of a painting. See Comment #33 below – I was a bit unsure of my hint, and have now been corrected by “The Horse’s Mouth”   (Rufus)             I intended DRAUGHT to mean “the act of drawing” (e.g. a draught horse) – the first definition in Chambers. It doesn’t get any more credible than that!

7d           Scholar finding sums are uplifting (7)
{ERASMUS} To find this eminent Dutch theologian simply reverse (uplift) the 2 words preceding the indicator. (I suppose it’s also an anagram, but we’ve already had quite a lot of them)

9d           Callous urge one may get at a picnic (4-6,3)
{HARD-BOILED EGG} A 2-word synonym for callous, followed by one for urge (as in encourage) and make what we British historically have always taken on picnics. (Remind me to tell you a funny story about this if we ever meet!)


15d         Doctor introduces contest to provide entertainment (5)
{MOVIE} A standard abbreviation for Doctor (usually the military variety) and a verb meaning contest combine to make this type of entertainment.

16d         Instruments of love in high orders (5)
{OBOES} Our honours system includes the MBE, but you need the next highest awards, with O (love) in the middle, to find these woodwind instruments.

20d         A river once more rises and falls (7)
{NIAGARA} Not many to go, so this one could be my Clue of the Day. A reversal (rises in a Down clue) of A, R(iver) and a word for once more, and we arrive at this well-known water feature. Nice surface!

21d         For instance, test papers looked easy initially (7)
{EXAMPLE} I started off from the wrong place with this one, wanting to begin with EG. Not so fast – that’s the answer. Take an abbreviation for a test, and the initial letters of papers looked easy. Nice deception, Roger!

27d         Plan shows parking place (4)
{PLOT} Combine P(arking) and a word for a (parking) place to derive a synonym for plan. Not sure about this one – my Big Red Book doesn’t list the synonym, but it just about works, I suppose.

28d         Just not enough to gain a distinction (4)
{FAIR} Double definition of a word meaning just, as in proper, and something that is only average.

Altogether a pleasant start to a new crossword week, with the twinkle in Rufus’s eye ever-present. One or two of the 4-letter  clues had me reaching for Big Dave’s help for a sanity check, but overall I enjoyed it.  How about you?