It didn’t take long to write in the answers for this puzzle, but some of the wordplay is a bit trickier (and I needed the help of a fellow blogger to get to the bottom of one clue) so I quite enjoyed it. It seems to have a bit of a food theme. How did you get on?
If you want to see an answer highlight the space between the brackets under the relevant clue.

1a  Guinea pig fed it in space (6)
{CAVITY} – fed here means “given to eat” or filled with, so a South American rodent (guinea pig) has to have IT inserted to make a hollow space. 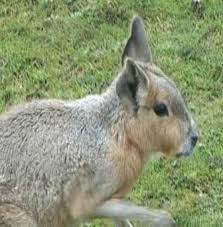 4a  US marine tossed about on board (8)
{AMERICAN} – on board often means between the letters S..S (i.e. inside the abbreviation for ship) but here it just indicates that a two-letter abbreviation meaning about or approximately has to go inside (on board) an anagram (tossed) of MARINE.

10a  A fur almost lost by Asian prince (9)
{ASTRAKHAN} – an adjective meaning lost forfeits its final Y (almost) and what’s left is followed by the title of a prince or chief in Asia (think Genghis). The result is the dark curly fleece of young lambs from central Asia.

12a  Type of car difficult to better (7)
{HARDTOP} – a charade of an adjective meaning difficult and a verb to better produces a type of car.

13a  Anteater cruelly chained (7)
{ECHIDNA} – an anagram (cruelly) of CHAINED gives another name for the spiny anteater.

14a  Ship emerging from river, on course (5)
{LINER} – a passenger ship comes from R(iver) after (on, in an across clue) a course or direction.

15a  Go out with servant, having time off in Welsh town (4,4)
{EBBW VALE} – this is a Welsh town which over the years has had both Aneurin Bevan and Michael Foot as its MP. String together a verb to go out (like the tide), W(ith) and a male servant without the final T (having time off).

18a  Ranks as a ground state (8)
{ARKANSAS} – the home state of Bill Clinton is an anagram (ground) of RANKS AS A.

20a  Extremely tight during card game and bingo (5)
{LOTTO} – put the outer letters (extremely) of T(igh)T inside an old card game to make a children’s game, similar to bingo.

23a  Old man describing scented Italian dish (7)
{POLENTA} – put an affectionate term for your father (old man) round a (rather obscure) adjective meaning having a smell (scented). The result is an Italian dish of cornmeal which is first boiled then grilled or fried.

25a  Initially, neither of us is hard to feed (7)
{NOURISH} – the definition here is to feed and my initial thought was that there was a word missing to account for the middle letter. Thanks to Crypticsue for sorting me out and unravelling the wordplay – the initial letter of N(either) is followed by OUR (of us), IS and H(ard).

26a  Right occasion to rotate forward (5)
{REMIT} – the definition here is forward, as a verb. After R(ight) reverse (to rotate) an occasion or juncture.

27a  Commuter’s ticket — green, possibly (9)
{PASSENGER} – start with a ticket or permit and follow this with an anagram (possibly) of GREEN to make a commuter.

28a  Following videos, attempt needlepoint (8)
{TAPESTRY} – a verb meaning records or videos is followed by a synonym for attempt to make a form of embroidery.

29a  A tape recorder, perhaps, kept in austere office (6)
{STEREO} – hidden (kept) in the clue is a piece of equipment such as (perhaps) a tape recorder. Of all the devices which could have been used as an example it’s a bit odd that the setter has used one which provides half the answer to the previous clue.

1d  Small house in weird locale has a cellar (4,4)
{COAL HOLE} – put the abbreviation for house inside an anagram (weird) of LOCALE.

2d  Review managed without English master (7)
{VETERAN} – put a synonym for to review or examine critically and other word for managed around (without) E(nglish) to make an experienced person (master).

3d  Pastry brought over to character over in restaurant (9)
{TRATTORIA} – reverse (brought over, in a down clue) a pastry with a sweet or savoury filling, add TO and finish with a synonym for character or manner which also has to be reversed. You should end up with an Italian restaurant. The surface is a bit clunky.

5d  Dubious activity of male working with important firm (6,8)
{MONKEY BUSINESS} – this is a dubious activity. Start with M(ale), add words meaning in operation (working) and important, then finish with a synonym for firm or company.

7d  Rotter keeping Italian in the Spanish fortress (7)
{CITADEL} – a synonym for rotter has a two-letter abbreviation for Italian inserted (keeping .. in), then this is followed by the Spanish, masculine, definite article.

8d  React drunkenly after noon drink (6)
{NECTAR} – the drink of the gods is an anagram (drunkenly) of REACT after N(oon).

9d  Cheeky youngster, one taking picture through (14)
{WHIPPERSNAPPER} – this is a cheeky young person. Start with an informal word for someone stealing or nicking (one taking), add a photograph and a preposition meaning through or by means of. 17d  Reluctant to go on a river with one old womaniser (8)
{LOTHARIO} – a rake or womaniser is formed from an adjective meaning reluctant followed by A, R(iver), I (one) and O(ld).

19d  Hors d’oeuvre and portion of bread, sponge later (7)
{ROLLMOP} – this hors d’oeuvre made from pickled herring is a charade of a piece of bread and a verb to sponge or wipe away. 21d  Milne character, holding his tail, set off (7)
{TRIGGER} – the name of one of Pooh’s mates has its last character (his tail) inserted in it to make a verb meaning to set off or activate.