Toughie No 595 by Giovanni

The Grumpy Old Man is back again!

My problem with Giovanni’s puzzles is that you never know which Giovanni is going to turn up. I found this one to be a boring slog and I didn’t enjoy it at all. 10a    Birmingham arena about to get one lot of stars and another (9)
{CENTAURUS} – reverse the name of the arena near Birmingham Airport and add a constellation to get another constellation, this one visible in the Southern hemisphere 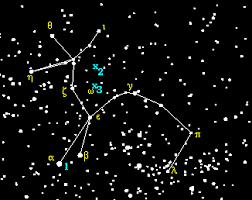 13a    Firm turned round by leading American who has great influence? (7)
{OCTOPUS} – reverse the abbreviation for a firm or business and follow it with a word meaning leading and a two-letter alternative for American to get a person or organization with widespread influence – perhaps in picking the winners of football matches! 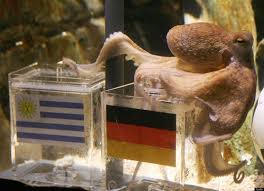 14a    In the capital a leader wants hearts first and foremost (5)
{HANOI} – to get this Asian capital city start with A and a leader, perhaps at the top of the record charts (2,1) and precede them with H(earts)

20a    Stir created by special outfit (3,2)
{GET UP} – a double definition – to stir first thing in the morning or an outfit for a special occasion

26a    Like a coined word to denote ‘Christian but not Anglican’? (5)
{NONCE} – an adjective meaning adopted or coined for a particular occasion only (not a lot of people know that!), when split(3,2), could mean Christian but not belonging to the Anglican church

28a    Wild beasts running in the chase (8)
{CHEETAHS} – these wild beasts are an anagram (running in?) of THE CHASE 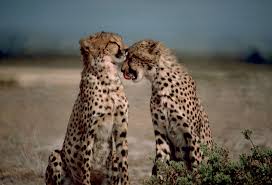 3d    Cruel old character upset Biblical town to the north (9)
{DRACONIAN} – an adjective meaning cruel is derived from O(ld) and a character or eccentric person reversed (upset) followed by a town where, according to the Gospel of Luke 7:11-17, Jesus resurrected a young man which is also reversed (to the north in a down clue)

5d    Record how old we are — that’s intended, we hear, to create gloom (14)
{DISCOURAGEMENT} – a charade of a gramophone record (4), how old we are (3,3) and what sounds like (we hear) a word meaning intended gives gloom or dejection

6d    Youngster with oomph? 25 many years ago! (5)
{CUBIT} – a young animal is followed by oomph or sex-appeal to give an old 25 across approximately equal to the length of the forearm

9d    Feature of theatre is terrible muncher, so I carp (10,4)
{PROSCENIUM ARCH} – this feature of many theatres is an anagram (terrible) of MUNCHER SO I CARP 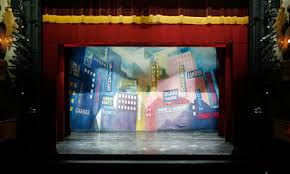 16d    Clothe the old woman, character creating fuss (9)
{RIGMAROLE} – a charade of a word meaning to clothe, the old woman or mother, and a character or part in a play gives a fuss

17d    Magnificent organ (though with one note missing) sufficed (8)
{SPLENDID} – to get an adjective meaning magnificent start with the organ that removes worn-out blood cells, remove (missing) the third note of the diatonic scale of C major and then add a word meaning sufficed or satisfied

19d    Big bird embraces bloke — start of exciting novel? (7)
{ROMANCE} – put an enormous bird, described in Arabian legend as being strong enough to carry off an elephant, around a bloke or chap and then add the initial letter (start) of Exciting to get a genre of novel

22d    Private hospital or home swamped by endless sound (6)
{CLINIC} – to get this private hospital put a word meaning at home inside (swamped by) most of (endless) a short sharp sound, like the one made by pressing the button on a computer mouse