A peek at the Quick crossword confirmed for me that this was Ray T’s handiwork. Not as risqué as some, but still very enjoyable.

9a    Held in chains, is tentatively pressing (9)
{INSISTENT} – hidden (held in) three words in the clue is a word meaning pressing or demanding

13a    About to trap snake, died and croaked (6)
{RASPED} – put Crosswordland’s two-letter word for about around a snake and then add D(ied) to get a word meaning croaked or screeched

18a    Tighten, say, before wee analysis (8)
{SCRUTINY} – start with a word segment that sounds like to tighten and then add wee or very small to get an analysis or examination

19a    Paper, ‘The Yorkshire Post’ (6)
{TISSUE} – this type of paper is a charade of T’ (the Northern abbreviation of the) and to post or publish

21a    Retired and rues time worked (8)
{EMERITUS} – a word meaning retired, especially denoting a retired professor, is an anagram (worked) of RUES TIME

26a    Vision emerging naked, upon shell initially (5)
{VENUS} – take the initial letters of the first five words and then read this all-in-one clue again to get the definition 27a    Collect silver for example, in jar (9)
{AGGREGATE} – to get a word meaning to collect or form into a group start with the chemical symbol for silver and then put the Latin abbreviation of “for example” inside a word meaning to jar or irritate

28a    Garter men undo, endlessly excited finding stocking? (12)
{UNDERGARMENT} – an anagram (excited) of GARTER MEN and UND(O) without its final letter (endlessly) to get a stocking or other article of clothing worn under another 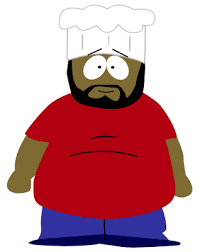 5d    Thick hair trailing behind half naked bird (8)
{NUTHATCH} – put a mass of thick hair after the first half of a word meaning naked to get this bird that feeds on seeds etc.

8d    Dish providing full stomach? (6)
{HAGGIS} – this Scottish dish is cooked inside a sheep’s stomach – after it has been removed from the sheep! 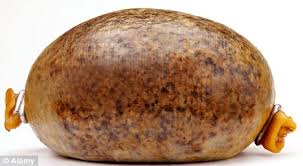 14d         Officer material with a neat exterior (8)
{SERGEANT} – this non-commissioned officer is a charade of a strong twilled material, A and the outside letters (exterior) of N(ea)T

16d         Resistance by one vessel captured by fellow pirate (9)
{PRIVATEER} – put R(esistance), I (one) and a vessel used for fermentation inside (captured by) a fellow or equal to get a pirate – International Talk Like A Pirate Day falls on Monday, September 19th this year

22d         Author surrounded by nibs, envelopes… (5)
{IBSEN} – this Norwegian playwright is hidden inside (surrounded by) the rest of the clue

25d         Go half crazy, flipping excited (4)
{AGOG} – take GO and either half of a word meaning crazy (like an allegedly popular Lady) and reverse them (flipping) to get a word meaning excited