The normal order seems to have been restored, and this Giovanni puzzle is, for me, the most difficult of the week as well as having some very entertaining clues. Let us know how you found it in a comment!
If you need to see an answer just drag your cursor through the space between the brackets under the clue.

1a  The French seller offers something fragrant (8)
{LAVENDER} – a French definite article is followed by another word for seller (more usually spelled with its penultimate letter ‘O’ rather than ‘E’) to make a plant with fragrant lilac-coloured flowers.

9a  Avoid pet that’s wayward and not like a natural family member (8)
{ADOPTIVE} – an anagram (wayward) of AVOID PET produces a description of someone belonging to a family but not a blood relation.

10a  Church books of a religious nature making a bit of money (4)
{CENT} – two abbreviations (the first of the Church of England, the second of books of the Bible) are combined to make a sub-division of the currency in some countries.

11a  Nelson injured with bad rib in a place where he suffered (6,6)
{ROBBEN ISLAND} – there’s a lovely bit of misdirection here. Nelson is not the surname of the diminutive admiral but the forename of the world statesman who was imprisoned in this place for more than a quarter of a century. It’s an anagram (injured) of NELSON and BAD RIB.

13a  Most shapely dogs, ultimately perfect when contest is held (8)
{CURVIEST} – string together a word for non-pedigree dogs and the last letter (ultimately) of (perfec)T and insert (held) a verb meaning to contest. 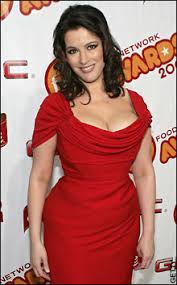 17a  Element with unpleasant smell produced by Harry’s wizard friend (5)
{BORON} – this element is a non-metallic solid. It’s a charade of the abbreviation of the unpleasant smell from someone in need of a shower and the forename of Harry Potter’s friend, Master Weasley.

18a  Dirty stuff produced by some industries (4)
{DUST} – dirty stuff is hidden (some) in the clue.

20a  Salad? The last thing I have! (6)
{ENDIVE} – we want a salad plant related to chicory (and it tastes horrible, in my opinion). Start with a final part (last thing) and add a contraction of I have.

21a  One gentle introduction to heaven in Bruckner’s church music (8)
{ANTIPHON} – this (thanks to Chambers) is a type of church music sung by two parties, each responding to the other. Insert I (one), the letter used for soft or gentle in music and the first letter (introduction) of H(eaven) into the forename of the composer Bruckner.

23a  Unionist made to suffer — it could be an uphill struggle here (12)
{MOUNTAINSIDE} – this is an anagram (to suffer) of UNIONIST MADE.

26a  The way we hear Genesis (4)
{ROOT} – a word meaning source, beginning or Genesis sounds like (we hear) a way or course.

3d  Another translation going out with confidence high (12)
{EXTRAVERSION} – this is the quality of being an outgoing person full of confidence. It’s a word meaning another or further followed by a synonym of translation. The answer is more usually seen with the fifth letter O rather than A.

4d  Ringer gets a big drink (6)
{DOUBLE} – ringer (possibly a dead one) and big drink are two definitions of this word.

6d  One is charged in sport — after grilling admits nothing (8)
{POSITRON} – a particle with a positive charge is an anagram (after grilling) of IN SPORT with O (zero, nothing) inserted (admits).

7d  Yesteryear’s money, pounds given to battling republicans (4)
{LIRA} – the currency of a European country prior to the adoption of the Euro is a charade of the letter used for pounds in our currency followed by battling Irish republicans.

8d  Most willing one to enter a desert after training (8)
{READIEST} – the definition is most willing. Insert (to enter) I (one) in an anagram (after training) of A DESERT.

12d  Sort of insect to upset people, darn it! (12)
{LEPIDOPTERAN} – a word for a butterfly or moth is an anagram (upset) of PEOPLE DARN IT.

14d  A ‘king rodent’ upset otter (5)
{TARKA} – the name of Henry Williamson’s otter is made by stringing together A, an abbreviation of king and a rodent and then reversing (upset, in a down clue) the lot.

16d  Impractical folk made errors — no gold, sadly (8)
{DREAMERS} – these impractical folk are made from an anagram (sadly) of MADE ERR(or)S without the heraldic term for gold.

17d  Member of shooting party full of energy repeatedly getting the bird (3,5)
{BEE EATER} – we want a hired help who rouses game birds and drives them towards the shooters waiting to slaughter them (I have to say that describing this person as a member of a shooting party is a bit like describing a waiter as a member of a dining party). Insert E(nergy) twice (repeatedly) to make a bird closely related to the kingfisher. The bird’s name normally has a hyphen, i.e. (3-5).

19d  Devious Soho spiv in gunfight (5-3)
{SHOOT-OUT} – an anagram (devious) of SOHO is followed by a synonym for spiv to make a gunfight.

22d  Worker needs loo when taken short and runs (6)
{TOILER} – a word for loo has its final T dropped (taken short) and R(uns) (cricket term) added. This has an amusing surface, but replacing “and” by “with” might have made it even funnier.