We have a not-too-difficult puzzle today from a mystery setter, but with a couple of references which may cause head-scratching. After having suggested last week that few would know the name of Colin Cowdrey (and having been shot down in flames), I am reluctant to suggest that the South African golfer in 21a could cause problems for some non-golfing solvers (although he does appear in puzzles from time to time). Let us know what you thought of it in a comment.
To reveal an answer drag your cursor through the space between the brackets under the clue.

1a  Film Isaac’s wife (7)
{REBECCA} – there’s a bit of biblical knowledge required for this double definition. The title of a film adaptation of a Daphne du Maurier novel is also the name of Isaac’s wife in the Old Testament. 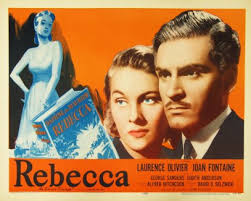 5a  Representative put in new suite, as an incentive (7)
{IMPETUS} – the definition is incentive or spur. Put an elected representative inside an anagram (new) of SUITE.

9a  Finished last of pizza, Italian food (5)
{PASTA} – an adverb meaning finished is followed by the last letter of pizzA.

11a  A character in ‘Howard’s End’ (10)
{APOSTROPHE} – cryptic definition – a character that often appears in greengrocers’ potato’s (sic).

12a  I was first to go round shop (4)
{DELI} – I was in first place is reversed (go round) for this specialist food shop.

18a  Young bishop manages town in Scotland or province in Canada (3,9)
{NEW BRUNSWICK} – this is a Canadian province (the only one to have both English and French as official languages). Start with a word meaning young or fresh and follow this with the abbreviation for B(ishop), a synonym for manages and a town in the north of Scotland.

21a  Eagle from Els knocking one out (4)
{ERNE} – the forename of Mr Els, the South African golfer, loses its I (one out) to leave a sea eagle.

25a  Rug a martyr used round the East after start of pilgrimage (6,3)
{PRAYER MAT} – this rug begins with P (start of Pilgrimage) and this is followed by an anagram (used) of A MARTYR round E(ast).

1d  Go over about fuel (6)
{REPEAT} – bring together a preposition meaning in the matter of (about) and a fuel made from decomposed vegetable matter to make a verb meaning to cover the same ground again (go over).

2d  Good man invested in good thing in US city (6)
{BOSTON} – a city in New England is the usual abbreviation for a good or holy man inside something that is beneficial (good thing).

3d  CO at a drugs bust? (10)
{COASTGUARD} – this is an all-in-one clue. This official is an anagram (bust) of CO AT A DRUGS. The clue works better for those countries where this official has responsibility for anti-smuggling activities. In this country this person is purely concerned with the co-ordination of search and rescue and it is the UK Border Agency which has responsibility for customs enforcement.

4d  Adult with energy, energy in abundance (1,4)
{A GOGO} – an informal adjectival phrase meaning in abundance is A(dult) followed by a synonym for energy repeated.

7d  Playwright with point to get across (8)
{TRAVERSE} – a verb meaning to get across is the surname of an English playwright and farceur followed by a cardinal point.

15d  Relative knows man I ruined (9)
{KINSWOMAN} – this relative is an anagram (ruined) of KNOWS MAN I.

17d  In which one may see Odette boast about the French leading English (4,4)
{SWAN LAKE} – this is a ballet in which a princess named Odette features. It’s a verb meaning to boast or show off around the French definite article, finishing with E(nglish).


19d  Petty quarrel at home making lunch for expat (6)
{TIFFIN} – a charade of a petty quarrel and the usual Crosswordland term for at home gives us what expats in India called lunch during the days of the Raj.

20d  Plot to strike causes uproar (6)
{BEDLAM} – a word meaning uproar (a corruption of Bethlehem, referring to the mental asylum called St. Mary of Bethlehem in London) is a charade of a plot (where you might grow things) and a verb to strike.

23d  Old man overlooking insect turning up in rice (5)
{PATNA} – a variety of long-grained rice is an affectionate abbreviation for father (old man) in front of (overlooking, in a down clue) an insect reversed (turning up, another down clue construct).

The clues which I liked best today were 11a and 17d. Let us know what you liked in a comment!