I wasn’t that taken with this puzzle (presumably by Giovanni) when I solved it, because I am allergic to a high-anagram diet. However, I warmed to it somewhat when writing the review. Let us know your views in a comment.
If you want to see an answer highlight the space between the brackets under the clue.

1a  Smart boy spilling nothing when collecting water (6)
{BRAINY} – the definition is smart. Remove the O (spilling nothing) from B(o)Y and insert (collecting) some water.

4a  Unattached man fancied Chloe in the pub (8)
{BACHELOR} – an anagram (fancied) of CHLOE goes inside a pub.

9a  Poet apparent in short demonstration (6)
{SAPPHO} – the abbreviation for apparent is inserted in a demonstration without its final W (short) to make a 7th century BC female poet who lived on Lesbos.

14a  The way this drama goes on! (6,7)
{STREET THEATRE} – cryptic definition of dramatic entertainment performed outside (on the public way). 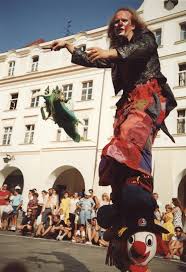 23a  Picked up second bit of broadcast with external aerial? (9)
{OVERHEARD} – the definition is picked up or caught by accident. It’s the second letter (bit) of bRoadcast which has around it (external) an adjective meaning aerial or high above.

24a  The air is polluted — it’s most dangerous (8)
{HAIRIEST} – an anagram (polluted) of THE AIR IS gives us an informal superlative meaning most dangerous.

25a  A river I love so comes into a piece of music (6)
{ARIOSO} – I was unaware of this musical term for a piece of music sung in a manner somewhere between aria and recitative (but BD obviously wasn’t because it’s in The Mine). Luckily for me it’s a very straightforward charade of A, R(iver), I, O (zero, love) and SO.

26a  Most complacent dope gets sorted out by head of school (8)
{SMUGGEST} – a synonym for dope or fool is followed by an anagram (sorted out) of GETS and the whole lot is preceded by the first letter (head) of School to make a superlative meaning most complacent.

27a  Journalist is performing, a very inventive man (6)
{EDISON} – a charade of the usual abbreviation for a senior journalist, IS and an adverb meaning performing give us the surname of a great inventor, who introduced the first practical light bulb amongst many other things.

1d  Simple facts coming from arts graduates in charge of science initially! (6)
{BASICS} – the simple facts that politicians like to urge us to return to are formed from a charade of arts graduates, the abbreviation for in charge and the first letter (initially) of Science.

2d  A quiet person saying ‘Well done!’? Not necessarily, at work! (9)
{APPRAISER} – string together A, the letter standing for piano or quiet in music and someone who says “Well done!”. You should end up with someone who may possibly say “well done” at your annual review at work, but on the other hand he or she may criticise you (for doing too many crosswords in work-time, for example).

3d  Poor hen suffering, one very unfortunate (2-5)
{NO-HOPER} – someone without any chance of success (very unfortunate) is an anagram (suffering) of POOR HEN.

5d  Minoan Crete, fantastic old civilisation (7,4)
{ANCIENT ROME} – an excellent surface reading relating to a Bronze Age civilisation in Crete gives us, through an anagram (fantastic) of MINOAN CRETE, the centre of a later, but still old, civilisation.

6d  Water-containing chemical he has injected behind, going up! (7)
{HYDRATE} – an adjective meaning behind or late is reversed (going up, in a down clue) and inserted (injected) in HE to make a compound containing water molecules.

7d  One serving lord, for instance, in story (5)
{LIEGE} – put the abbreviation of for instance inside an untrue story.

8d  One visiting uncle making a recovery? (8)
{REDEEMER} – uncle is an informal word for a pawnbroker, so this is a cryptic definition of someone turning up with sufficient cash to recover the goods that he or she had previously pawned.

15d  Figures on targets getting shot (9)
{TETRAGONS} – these four-sided figures are an anagram (getting shot) of ON TARGETS.

16d  Newspaper features cuts (page inside) (8)
{SPLASHES} – prominent features in newspapers are made from a verb meaning cuts with P(age) inside.

19d  Silly nerd — he and I were permanently stuck (7)
{INHERED} – an anagram (silly) of NERD, HE and I produces the past participle of a verb meaning to stick permanently or remain firm.

20d  Contact a person playing music, love getting trendy (6)
{ADJOIN} – a verb meaning to be next to or in contact with is a charade of A, someone who plays records, O (zero, love) and an informal word for trendy.

22d  What’s praised, not half — revolutionary country verse form (5)
{HAIKU} – take the first three letters (not half) of a past participle meaning praised and add the initials backwards (revolutionary) of our country to get a highly-structured Japanese verse form. Here’s one, written about 1300 AD by Natsume Soseki:

Over the wintry
forest, winds howl in rage
with no leaves to blow.

I liked 5d and 12d today, but my favourite clue was 8d. Let us know what you liked in a comment.