Today’s puzzle by Giovanni is very entertaining and, in my view, a bit less difficult than we have come to expect from him. I was torn between giving it two or three stars for difficulty – what do you think?
To reveal an answer drag your cursor through the space between the brackets under the related clue.

4a  Exclusive miss entering Diplomatic Corps (6)
{CLOSED} – put a verb meaning to miss or be deprived of inside (entering) the abbreviation for Corps Diplomatique to make an adjective meaning exclusive or limited to certain people.

8a  End period of education in America (8)
{TERMINUS} – the end of the line, or the station that is found there, is a charade of part of the academic year, IN and the abbreviation for America.

10a  Attacker’s assistant grabbed by bishop (6)
{RAIDER} – an assistant is contained (grabbed) in the abbreviation of the title given to a bishop.

11a  Additional fabric that’s soft, not hard (4)
{PLUS} – start with a rich soft fabric (a word that we’re more used to seeing as an adjective) and remove the final H (not hard) to leave an adjective meaning additional.

12a Lout in rage breaking law (10)
{REGULATION} – an anagram (breaking) of LOUT IN RAGE provides a law.

13a  What you get in the argument is extremely loud (3-9)
{EAR-SPLITTING} – this is an adjective meaning extremely loud. It’s also, cryptically, a description of how a three-letter word divides thE ARgument.

16a  Equipment in office, everything fitting in (12)
{INSTALLATION} – start with a phrase meaning in office (often used for a posting abroad) and insert (fitting in) ALL.

22a  Arab chaps you and I may hug (6)
{YEMENI} – this Arab whose country lies at the southern end of the Arabian peninsula is formed from a synonym for chaps which is surrounded by (may hug) an old word for you and I.

23a  Only Conservative docrine that’s seen as mistake (8)
{SOLECISM} – a charade of an adjective meaning only, C(onservative) and an informal word for doctrine produces a mistake of grammar or etiquette, like using your knife to eat peas. I’ve left the spelling mistake (unfortunately not a grammatical mistake, which would have been quite apt) in the clue – I don’t know whether it’s reproduced in the paper.

24a  One examining old coin found in part of bed (6)
{TESTER} – triple definition, the old coin being a silver sixpence and the bed part being a canopy over a four-poster.

25a  Sound of seal or young bird (6)
{CYGNET} – this young swan sounds like a seal (of the inanimate kind).

1d  Discharge cargo, a large amount (8)
{SHEDLOAD} – an informal term for a large amount is also (4,4) how a lorry may discharge its cargo (often on a roundabout in the middle of the rush-hour!).

2d  Seductive females a politician’s seen after five (5)
{VAMPS} – this is a dated, informal term for women who use their sexual attraction to seduce and exploit men. Put A and an elected politician, plus the ‘S all after the Roman numeral for five.

3d  Vague person acting as leader (7)
{GENERAL} – double definition. An adjective meaning vague or non-specific is also, as a noun, someone in charge.

5d  Siren in mythology with garland on (7)
{LORELEI} – a word meaning mythology or knowledge passed down through the generations has an Hawaiian garland added to make the legendary siren on the Rhine who lured sailors to their death. “On” in a down clue is supposed to mean on top of or before rather than after.

9d  Stars as guitarist in new arrangement (11)
{SAGITTARIUS} – and for our third anagram in a row we want a new arrangement of AS GUITARIST. This gives us a constellation and a sign of the zodiac.

15d  See storm brewing in area around Chard (8)
{SOMERSET} – an anagram (brewing) of SEE STORM gives us the county where the town of Chard is to be found. Brewing is rather an appropriate anagram indicator for this county.

17d  Tree worship being performed (7)
{SERVICE} – double definition, the first being a Eurasian tree similar to the rowan. This tree has turned up before in Toughies but I’m not sure that we’ve seen it in a Cryptic.

18d  Support friend without running the risk of prosecution (7)
{LEGALLY} – a charade of a support and a comrade or friend produces an adverb meaning within the law.

19d  Outspoken when there’s mess around city area (6)
{DIRECT} – the definition is outspoken or frank. Put a synonym for mess around the postal area code for the City of London.

21d  Graduate getting to study artist (5)
{BACON} – someone having a degree in an arts subject is followed by a verb meaning to study to form the surname of a twentieth century Anglo-Irish artist. This is a self-portrait: 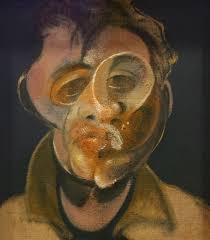