Shamus has given us another pangram today and they’re rapidly becoming a trademark of his. It’s a pleasant puzzle with very fair clueing. Let us know what you thought of it in a comment.
Those who need to see an answer will find it lurking between the curly brackets under the relevant clue. Highlight the space between the brackets to reveal it.

1a  Local black drink knocked back in island (8)
{BARBADOS} – string together a drinking place (local), the abbreviation for black and a soft drink reversed (knocked back) to make a Caribbean island.

5a  Outing at public expense? Abandon it in speech (6)
{JUNKET} – an extravagant trip out for freeloaders sounds like, if you split it as (4,2), to take something to the tip.

9a  Nigel tailored my clothing (8)
{NEGLIGEE} – an anagram (tailored) of NIGEL is followed an exclamation of surprise (my!) to get a loose, flimsy gown.

10a  Character following Romeo? (6)
{SIERRA} – Romeo is the codeword standing for R in the Nato phonetic alphabet, so what comes next?

12a  What’s stashed in illegal van is expected to produce a shock (9)
{GALVANISE} – a verb meaning to stimulate or shock into action is hidden (stashed) in the clue.

13a  In-flight column airline welcomed in part (5)
{NEWEL} – the second hidden word (in part) in succession is one I’d not heard of. This is an upright column around which the steps of a circular staircase wind.

19a  Asinine old dictator with face of ogre and nervous habit (7)
{IDIOTIC} – the definition is asinine. String together the forename of an old Ugandan dictator, the initial letter (face) of O(gre) and an habitual nervous twitch. 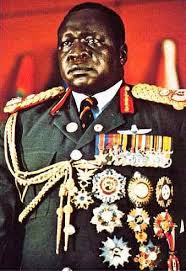 21a  Short of time, risk Eastern drink (4)
{SAKE} – start with a verb meaning to make a wager (risk) and remove the T (short of time) to leave a Japanese alcoholic drink.

27a  Youngster really submitting name for college (6)
{INFANT} – start with a phrase (2,4) meaning really and substitute N(ame) for the C(ollege) to end up with a youngster.

28a  Terribly vain and flashy sort without power beginning to encourage encroaching (8)
{INVASIVE} – the definition is encroaching. An anagram (terribly) of VAIN is followed by a flashily dressed man (whose business dealings may be of doubtful legality) without the P(ower), ending with the first letter (beginning) of E(ncourage). 29a  Old man’s mention of hot spring (6)
{GEEZER} – this is a bit of an old chestnut. It’s a slang term for an old man and it sounds like (mention of) a hot spring.

30a  Far-reaching and expert cast (8)
{PROFOUND} – an adjective meaning intense or far-reaching is a charade of an expert and a verb meaning to make something by melting and moulding metal (cast).

2d  Entertain man with drink (6)
{REGALE} – a verb meaning to entertain (often by telling amusing stories) is a charade of an abbreviated man’s name (think of the name that Elton John started life with) and an alcoholic drink.

3d  A fool accompanied by a girl (5)
{ANITA} – just to even things up after a man’s name we now have a woman’s name. It’s made from A, a synonym for fool and then another A.

6d  Group of workers to raise standard (5,4)
{UNION JACK} – a common name for our national flag (standard) is a charade of a workers’ association and a verb meaning to raise (a car in a garage, perhaps).

7d  Church rule that’s overturned left in Scottish islands capital (8)
{KIRKWALL} – the chief town of the Orkney islands is the Scottish word for church followed by a rule reversed (overturned, in a down clue) and L(eft).

15d  UN, pet hate, mobilised to increase risk? (2,3,4)
{UP THE ANTE} – this phrase derives from poker and it means to increase risk or to play for higher stakes. It’s an anagram (mobilised) of UN PET HATE.

17d  Spot element in a government getting preoccupied (8)
{FIXATING} – a present participle meaning obsessively preoccupied with is built from the sort of spot or jam that you may find yourself in, followed by a metallic element inside A and G(overnment).

18d  Shooter’s strain when coming to plunder (3,5)
{AIR RIFLE} – this is a shooter, i.e. a firearm. It’s a charade of a musical strain and a verb meaning to plunder.

21d  House managed to get up for academic forum (7)
{SEMINAR} – a type of house is followed by a synonym for managed which is reversed (to get up, in a down clue).

22d  Note story with university setting (6)
{MILIEU} – the definition is setting. It’s a charade of a note in tonic sol-fa, a story of dubious validity and U(niversity).

26d  Man with son on Welsh river (5)
{STAFF} – man here is a verb, i.e. it means to supply manpower. Start with S(on) and add the river that flows through Cardiff.