A full review by Rahmat Ali

Greetings from Kolkata. A very nice and pretty straightforward Saturday puzzle from the setter. I feel happy to present to you a full review of the same for your kind perusal and precious feedback.

During my early teens, I knew through my biology book that the sea urchin, the answer to 4a, was a marine creature belonging to the phylum Echinodermata. I was aware of the word ‘urchin’ as referring to a raggedly-dressed young child and also good many synonyms attributed to the term vociferating negative features. That led me to often wonder why the sea urchin was so stigmatised. But this time, after solving the puzzle, I visited the net as I had become inquisitive to know more about the creature that was not learnt by me then. Although I could not still get hold of any specific reason for the creature to be named thus, I did come across some unusual facts about it. The sea urchins have archaically been called sea hedgehogs since they resembled the hedgehogs of the land and I was much pleased to learn about this name, but also wondered why the biologists discontinued it and rechristened it as sea urchin. But lo! I was again delighted to learn that the name ‘urchin’ was derived from the Old French herichun, which came from Latin ericius meaning hedgehog. Hence, the name remained unconnected to any of the negative features. Like other echinoderms, sea urchins have roughly spherical bodies with five equally sized parts radiating out from their central axes. The mouth is at the base and the anus at the top; the lower surface is described as ‘oral’ and the upper surface as ‘aboral’.

I also enlightened myself through the net about the Airedale, the answer to the clue of 5d, and found that it is actually the shortened name for Airedale Terrier. It is traditionally called the ‘King of Terriers’ because it is the largest of the terrier breeds, weighing 19 to 25 kilograms in fit condition. It was bred from the Old English Black and Tan Terrier, now known as the Welsh Terrier, the Otterhound and some other Terrier breeds and has contributed to the Yorkshire Terrier. Originally bred to serve as a versatile hunting and all around working farm dog in Britain, this breed has also been used as a war dog, guide dog and police dog. In the United States, this breed has been used to hunt big game, upland birds and water fowl. The breed has a broken coat like many terriers; their outer coat being hard, wiry and stiff and undercoat softer.

1a    Send watch to be wound back (5)
REMIT: TIMER (watch) as a device for indicating or measuring elapsed time, like a stop watch, is to be reverted (wound back) to arrive at a definition of a verb meaning to send money in payment or as a gift

4a    Marine species lookin’ to catch you, ultimately (3,6)
SEA URCHIN: SEARCHIN’ (lookin’) to hold inside (catch) the last or ultimate letter (ultimately) of [YO]U, leading to the definition of a typically, globular animal, echinoderm in the class Echinoidea and a member of the phylum Echinodermata

9a    Woodworker adds fish to log (9)
CARPENTER: A charade of CARP (fish) as an oily deep-bodied freshwater fish of the family Cyprinidae and ENTER (log) takes to the definition of a person who makes and repairs wooden objects and structures

10a    Day at home that’s smooth and silky (5)
SATIN: The abbreviation SAT for Saturday is followed by IN (at home) or present at one’s home, arriving at the definition of a closely-woven fabric with a lustrous and unbroken surface showing much of the warp

11a    Stretch where angler repositioned line, finally (7)
ENLARGE: An anagram (repositioned) of ANGLER is followed by the last or final letter (finally) of [LIN]E, leading to the definition of a verb meaning to make or become larger or more extensive

12a    Tedious novel ceases to exist (4,3)
DIES OUT: An anagram (novel) of TEDIOUS leads to the definition of a verb in the present tense for third person singular form meaning becomes less common and finally stops existing

15a    Terms in list are endless in magazine (8)
GLOSSARY: AR[E] having the last letter removed (endless) and placed inside (in) GLOSSY (magazine) as the colloquial term for a glossy magazine, leading to the definition of a dictionary of terms used in a specialised subject area

18a    Journalist on carrier (8)
REPORTER: A charade of RE (on) used in commercial jargon for the preposition regarding or with reference to and PORTER (carrier) as a person employed at a railway station, hotel, market etc. to carry passengers’ luggage, arriving at the definition of a person who reports, especially for a newspaper or legal proceedings

20a    A burden describing some clues (6)
ACROSS: A from the clue and CROSS (burden) as a cause of suffering or something unavoidable that has to be endured take to the definition of a type of crossword clues which has answers read horizontally

23a    Top police force take a nosedive (7)
PLUMMET: A charade of PLUM (top) as something superior or very desirable and MET (police force) as the colloquial name for the London Metropolitan Police; arriving at the definition of a verb meaning to fall or drop straight down at high speed or plunge headlong

24a    After opening of trading, currency in difficulty (7)
TROUBLE: After the initial or first letter (opening) of T[RADING], ROUBLE (currency) as the currency of Russia follows, leading to the definition of a noun meaning the state or condition of being difficult or taking of pains

26a    Authoritarian back on ship (5)
STERN: Double definition; the first being an adjective meaning strict and severe and the second being a noun referring to the hind part of a vessel

27a    Right in the main? (9)
STARBOARD: A cryptic way of arriving at the definition of a nautical term that indicates the right-hand side of a ship sailing in the high sea (main) as opposite to port or the left-hand side or the side that faces the port, allowing supplies to be ported aboard by porters

28a    Interred, a rogue learned new skills (9)
RETRAINED: An anagram (rogue) of INTERRED A take to the definition of a verb in the past tense meaning learned fresh or new skills so as to be able to do a different job

29a    Fruity edges of raspberry? (5)
RANDY: R AND Y as the obvious answer to part of the clue asking: edges of R[ASPBERR]Y? leads to the colloquial definition of an adjective meaning lecherous or lustful or sexually suggestive in content or style

2d    Mushroom added with first of lentils (5)
MOREL: Additional or MORE (added) followed by the first letter (first) of L[ENTILS] take to the definition of a widely distributed edible fungus which has a brown oval or pointed fruiting body with an irregular honeycombed surface bearing the spores

3d    Other plays with me, one’s proven (7)
THEOREM: An anagram (plays) of OTHER and (with) ME, taking to the definition of a general proposition not self-evident but proved by a chain of reasoning

4d    Crossword writer in sun at the end of the day? (6)
SETTER: Double definition; the first being the compiler or constructor of clues in a crossword puzzle and the second cryptically referring to the sun towards fulfilling its role of apparently descending and finally disappearing below the horizon causing the twilight

5d    Dog on telly, bitter (8)
AIREDALE: A charade of AIRED (on telly) as broadcast or transmitted on television and ALE (bitter) as a bitter or beer that is strongly flavoured with hops and has a bitter taste, brewed by top fermentation; taking to the definition of a dog breed of the terrier type that originated in the valley or dale of the River Aire, in the West Riding of Yorkshire

6d    Bacon poor as her sausage sandwiches (7)
RASHERS: Part of or hidden inside (sandwiches) pooR AS HER Sausage, leading to the definition of thin slices of bacon for broiling or frying 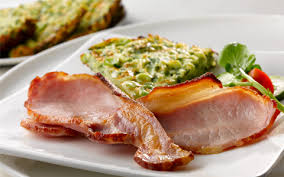 8d    Group has nothing to break your fall (5)
NONET: A cryptic way of telling about a NO NET (has nothing to break your fall) which, if otherwise available, would have prevented you, as it does to the acrobatic and aerial performers at a circus, from hitting the ground heavily after the fall and suffering dreadful consequences, leading to the definition of a group of nine people, especially musicians

14d    Minder put off being foolish (9)
IMPRUDENT: An anagram (off) of MINDER PUT gives the definition of an adjective meaning not showing care for the consequences of an action

16d    Number in the sixties, a short way back (9)
YESTERDAY: Double definition; the second meaning not very long time ago that leads to the first referring to a song by the English band ‘The Beatles’ that was first released in August 1965 on the album Help!

17d    Plane is not dismantled for scrap (8)
JETTISON: JET (plane) as a jet-propelled aeroplane followed by an anagram (dismantled) of IS NOT; leading to the definition meaning for throwing overboard anything discarded as useless or no longer wanted, especially in times of danger

19d    A minor revolutionary leading a nation (7)
ROMANIA: An anagram (revolutionary) of A MINOR followed by A from the clue takes to the definition of a country at the confluence of Central, Eastern and Southeastern Europe

22d    Attitude about right for thread (6)
STRAND: STAND (attitude) as a position adopted around or embracing (about) the abbreviation R (right), leading to the definition of a thread twisted or plaited with others to form a rope, cord, or the like

23d    Model in picture, so pumped up (5)
POSER : Part of or hidden inside (in) pictuRE SO Pumped as a reversal (up) in the down clue take to the definition of a person who poses, especially someone who dresses or behaves etc. so as to be noticed