Hello, everyone.  Today's puzzle takes the difficulty and the enjoyment up a notch from yesterday.  Which I suppose is just what we want on a Tuesday.  I look forward to reading your thoughts on it.

I'd like to present once again a word cloud showing the answers that we met most often in 2018 back-page puzzles.  Font sizes are proportional to number of appearances, from eight (NEVERTHELESS) down to three.  The picture doesn't have any deep significance because answer repeats are just random coincidence, but perhaps it can serve as a reminder of some enjoyable solving experiences.  Click on it to open a larger version in a new browser window. 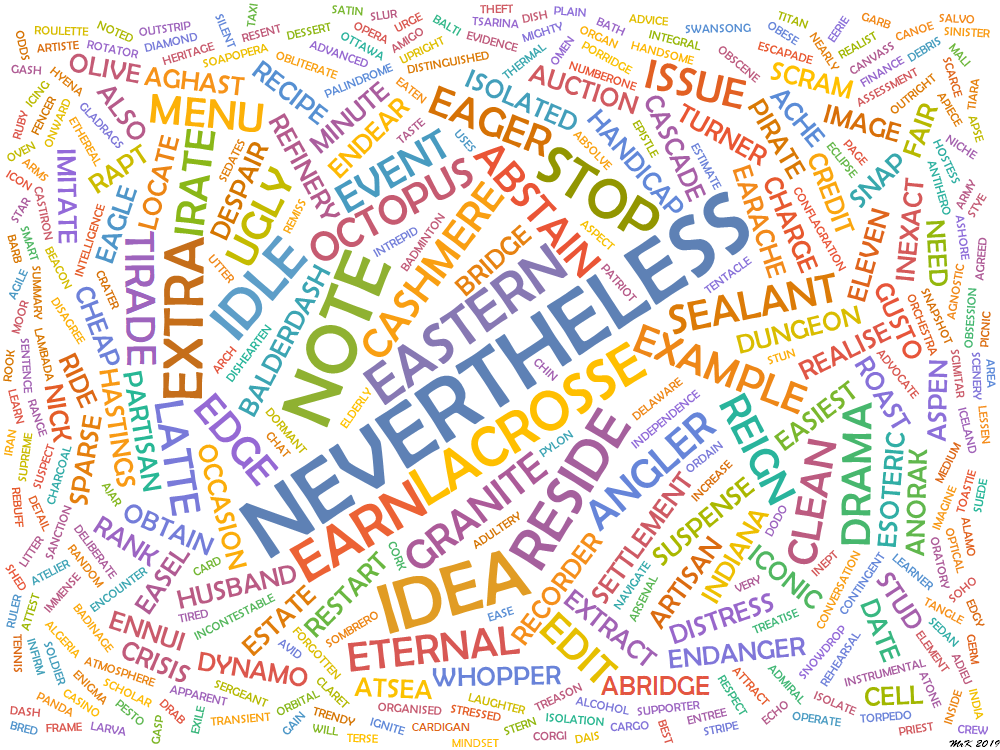 It's last call for reader contributions to the large card that's being created for the upcoming 10th Birthday Bash.  If you'd like to share your thoughts about what the site has given you, express your thanks and well wishes to BD, etc., you can click here to leave your contribution.  Lurkers, commenters, bloggers, and setters are all welcome to contribute.

In the hints below most indicators are italicized, and underlining identifies precise definitions and cryptic definitions.  Clicking on the this would be the answer buttons will reveal the answers.  In some hints hyperlinks provide additional explanation or background.  Clicking on a picture will enlarge it or display a bonus illustration.  Please leave a comment telling us how you got on.

1a    Sees no Conservative wearing appropriate clothing in parliament? (7)
NOTICES:  NO from the clue is followed by the single-letter abbreviation for Conservative contained in (wearing) the plural of an item of male clothing that's appropriate for parliament, business, a fancy restaurant, etc.

5a    Hold me back -- get ready! (7)
EMBRACE:  Put together the reversal (back) of ME from the clue and an instruction to get ready or be prepared 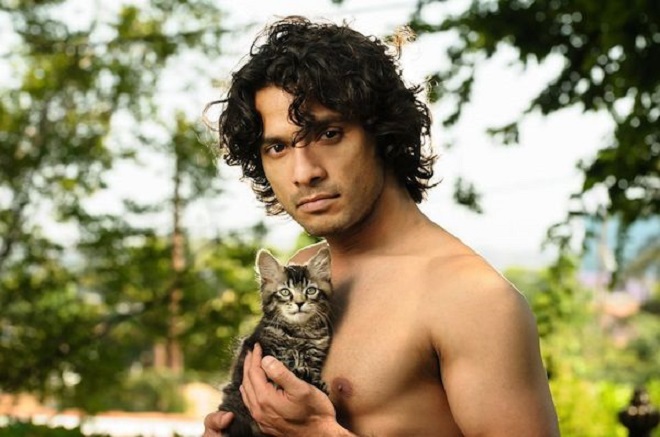 10a   Religious education document that's about will corrupt (9)
REPROBATE:  A charade of the abbreviation for Religious Education and a legal document concerning a will

18a   I prevent mom's tipsy advances (12)
IMPROVEMENTS:  An anagram (tipsy) of I PREVENT MOM'S

21a   Come face to face with turkey, we hear? (4)
MEET:  The answer is a homophone (we hear) of something of which turkey is an example (indicated by the ? at the end of the clue)

26a   9 large heads of universities peckish immediately before noon (5)
LUPIN:  The clothing abbreviation for large is followed by the initial letters of (heads of) UNIVERSITIES, PECKISH, IMMEDIATELY, and NOON

27a   Amateur records flipping exceptional (7)
SPECIAL:  The reversal (flipping) of the fusion of an adjective meaning amateur and the abbreviation for some records intermediate in duration between a single and a long player

28a   King on board galley, drifting in the main (7)
LARGELY:  The Latin abbreviation for king inserted in (on board) an anagram (drifting) of GALLEY

1d    Bishop getting the sack after upsetting article's seized (6)
NABBED:  Follow the chess abbreviation for bishop with the sack or a sleeping place, and then put that lot after the reversal (upsetting, in a down clue) of a grammatical article

2d    Some feminists' poor theory about men (6)
TROOPS:  These military men are lurking (some…) in the reversal (about) of the remainder of the clue 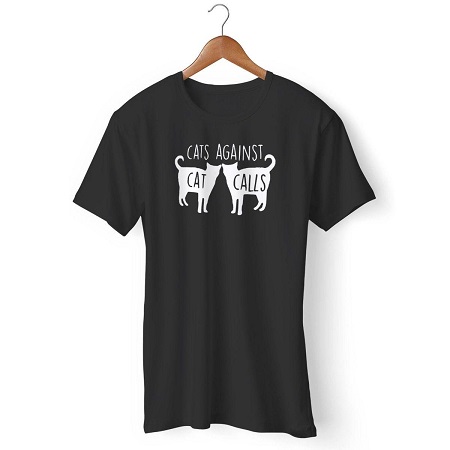 3d    Contrast MP in Cairo cavorting with relative (10)
COMPARISON:  MP from the clue is inserted in an anagram (cavorting) of CAIRO, and that's all followed by a male child

4d    Father close to an alluring woman (5)
SIREN:  Put together the usual unusual synonym of father and the final letter of (close to) AN.  These examples of the answer are seen in "O Brother, Where Art Thou?", a fine Coen brothers movie loosely based on Homer's Odyssey

5d    European cross and worried -- that's priceless (9)
EXPENSIVE:  Stick together the single-letter abbreviation for European, the cross-shaped letter, and worried or seriously thoughtful 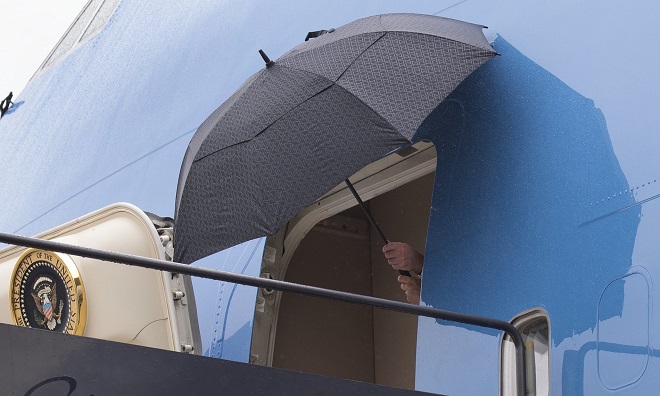 7d    Place for croaking animals? (8)
ABATTOIR:  Nothing to do with frogs, this is a cryptic definition of a place where an animal might meet its end (unless, as the song goes, he's packing an Uzi …)

8d    Half of gemstones by cove suddenly appearing (8)
EMERGENT:  The first half of some green gemstones is followed by a synonym of the old British slang meaning of cove

13d   Trip Laura organised without Charlie for certain (10)
PARTICULAR:  An anagram (organised) of TRIP LAURA containing (without, although you should read what the boss has to say about that usage here) the letter represented by Charlie in the NATO phonetic alphabet 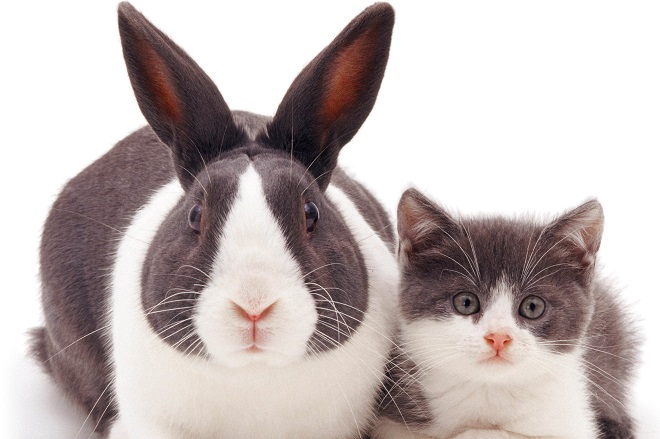 16d   Rocks  suit (8)
DIAMONDS:  A double definition, the second referring to a suit in a pack of playing cards

17d   American pressure on Macron's little demand (8)
APPETITE:  Join together an abbreviation for American, the physics symbol for pressure, and how M. Macron might describe something that's little and feminine

20d   May not initially hiding information about business (6)
AGENCY:  All but the first letter (not initially) of [m]AY is containing (hiding) both an informal word for information and the single-letter Latin abbreviation for about or roughly

23d   Peter out with student getting artist's equipment (5)
EASEL:  Peter out or abate with the usual student or learner

Thanks to today’s setter for a fun solve.  I thought just about all of the clues were excellent.  I had ticks beside 18a, 2d, 4d, and 20d, and I'm giving the gold medal to 17d.  Which clues did you like best?