Hello, everyone.  I found today’s puzzle trickier than the average Tuesday crossword.  Some of that might be because I’m tired after travelling most of the day, but I think it probably has more to do with how the puzzle combines just three anagrams with a healthy dose of general knowledge and some nicely-disguised complex wordplay.  I very much enjoyed the battle with this puzzle so I’m rating it high on the enjoyment scale.

In the hints below most indicators are italicized and underlining identifies precise definitions.  Clicking on the 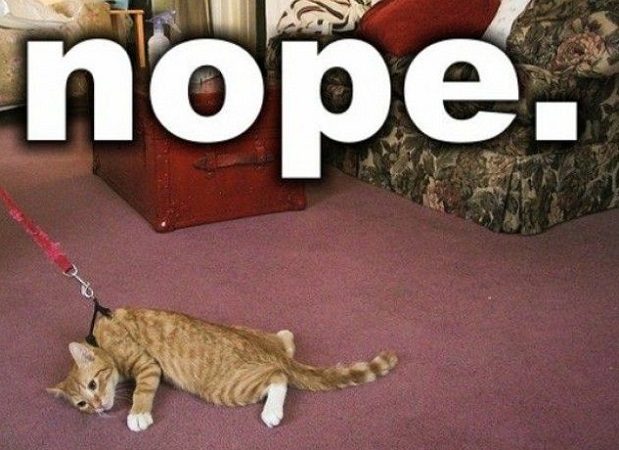 buttons will reveal the answers.  In some hints hyperlinks provide additional explanation or background.  Clicking on a picture will enlarge it.  Please leave a comment telling us how you got on.

9a    Bad thing, weapon used in disco (9)
NIGHTCLUB:  An anagram (bad) of THING with a caveman’s weapon

11a   Country in revolutionary fairy story (5)
SYRIA:  The answer is hidden in the reversal (revolutionary) of the rest of the clue

12a   Live on edge (6)
RESIDE:  The usual short word for on or concerning and the edge of a triangle or a square, for example

13a   Good boys protecting kid in best clothes (4,4)
GLAD RAGS:  The abbreviation for good, followed by some boys containing (protecting) kid or tease.  Of the many recorded versions of this song I’ve chosen this one by Mike d’Abo because he wrote it

15a   Take the part of one of Silver's crew and he will be very angry (4,5,4)
PLAY MERRY HELL:  The three words of the answer are respectively “take the part of”, a member of Long John Silver’s crew in Treasure Island, and a short form of “he will”

18a   Fifties Kitchen sink drama -- something Winnie was fond of? (1,5,2,5)
A TASTE OF HONEY:  It’s long before my time, but apparently Kitchen sink drama is a genre of 1950s theatre, film, art, literature, and television plays that revolves around angry young men.  The answer is one of its better-known examples, picked out by the clue because it’s also something that a fictional bear named Winnie enjoys

22a   Judge's pipe (8)
RECORDER:  A double definition.  One a barrister or solicitor appointed as a part-time judge, the other a musical instrument

23a   In section of sea, notice a large fleet (6)
ARMADA:  Assemble a section of sea that could be an inlet, a usual short word for a notice selling something, and A from the clue

26a   Played out, even across river (5)
TIRED:  The state of a sports match when the scores are even contains (across) the map abbreviation for river 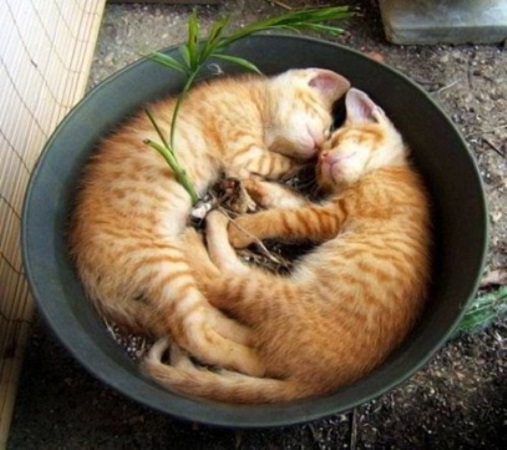 27a   Announce team in the USA (9)
STATESIDE:  Combine synonyms of announce and of team

28a   County town originally producing a red wine (6)
CLARET:  Put together a county in the Republic of Ireland and the first letter of (… originally) of Town

29a   You almost sussed out Greek hero (8)
ODYSSEUS:  An anagram (out) of SUSSED and all but the last letter (almost) of YO

1d    Row right up close to craft on the rocks (8)
BANKRUPT:  Concatenate a row (of switches, perhaps), an abbreviation for right, UP from the clue, and the last letter of (close to) crafT

2d    Gallons stored in Asian country port (5)
LAGOS:  The abbreviation for gallons is inserted in (stored in) a land-locked country in SE Asia to give a port city in Nigeria

3d    Foolish to stay up in German city (7)
POTSDAM:  Fuse together foolish or crazy and stay or pause.  The reversal of that lot (up, in a down clue) then gives a city in eastern Germany 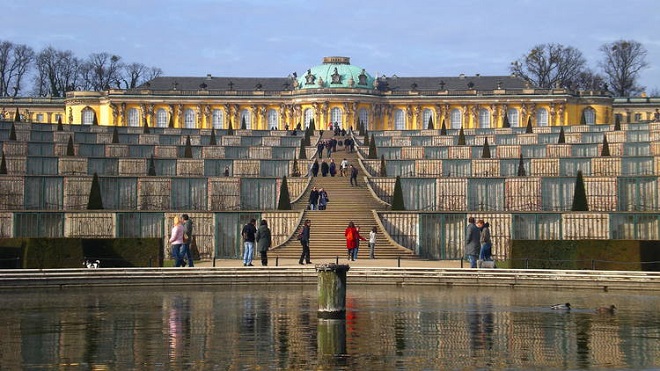 4d    Function of pitch, reportedly (4)
ROLE:  The answer sounds like (reportedly) a word meaning pitch, in the sense of a ship’s motion in rough seas

6d    Remainder to lodge round university (7)
RESIDUE:  To lodge or live containing (round) an abbreviation for university.  Surprised to see this lodge making a second appearance today

7d    Sailor, man wearing waterproof stuff (9)
TARPAULIN:  Stick together a usual sailor, a man’s name (an alter ego of one of our regular Monday setters, a Beatle, a chain of bakeries, a saint, …), and a short synonym of wearing (particular clothes) 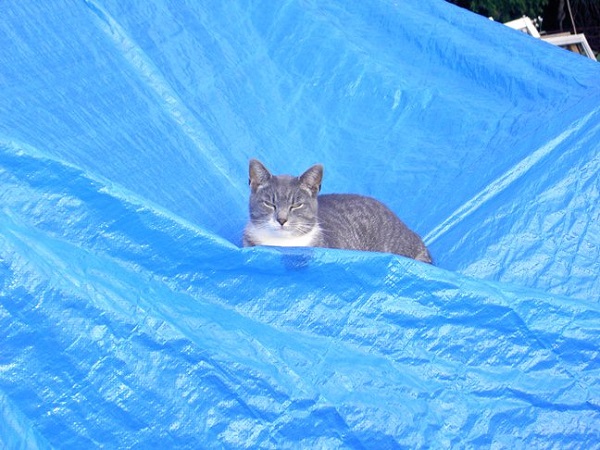 8d    Few and far between, boxes on foremost of estates (6)
SPARSE:  Cement together a verb meaning boxes, perhaps in training, and the first letter of (foremost of) Estates

10d   Everyone, taken in by most of band, in uproar (8)
BALLYHOO:  Begin with a simple word for everyone inserted in (taken in) BY from the clue.  Then append everything but the last letter (most of) a band or ring

16d   Evergreen opera song about a posh limo? (9)
ARAUCARIA:  A type of song in a opera contains (about) the fusion of A from the clue, the single letter for posh or upper class, and what a limo is an example of (indicated by the ?).  This evergreen plant is also known as the Monkey Puzzle Tree.  But in our community the word is better known as a pseudonym used by a distinguished crossword composer 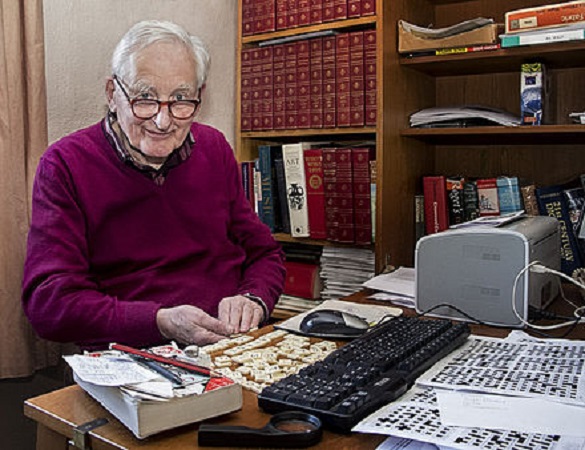 17d   Famous pianist, murderess's first husband in Sayers novel (4,4)
MYRA HESS:  Inserting the first letter of Murderess and the abbreviation for husband in different locations in an anagram (novel) of SAYERS gives a famous pianist (who I had never heard of.  This puzzle is making me feel rather young)

20d   Short durable cape -- that's the gear (7)
HARNESS:  All but the last letter (short) of a synonym of durable is followed by a usual cape or headland.  Some people think this gear works with cats.  It doesn’t

24d   Similar article to enjoy (5)
ALIKE:  Combine a grammatical article and a synonym of enjoy

25d   Eccentric  queen, for example (4)
CARD:  A double definition.  Crosswordland’s favourite eccentric or witty person is also a thing of which a queen is an example 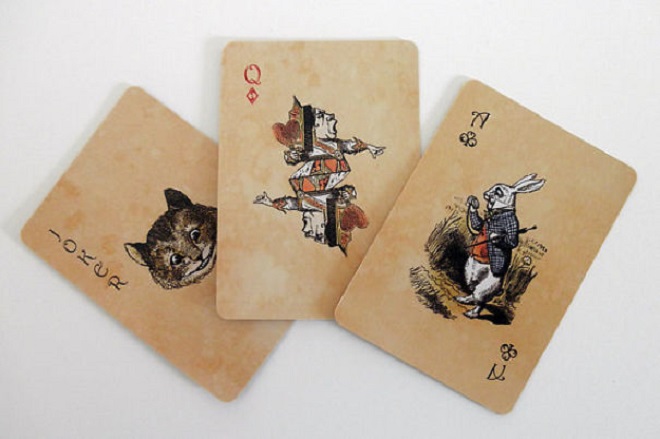 Thanks to today’s setter for a fun solve.  I liked how several of the clues took us around the world, and I appreciated the shout-out to a couple of setters.  Among the clues, one or more of 15a, 1d, and 10d occupy my top spot.  How about you?