Hello, everyone.  I found today’s puzzle easier going that the crosswords that we’ve faced on recent Tuesdays.  It was a most pleasant solve, due in part to several clues that had very smooth surface readings.

On his blog last Thursday, pommers observed that the regular cryptic and the Toughie had an answer in common and he wondered how often that had happened before.  The short answer turns out to be 54 times.  For the long answer, click the spoiler box to see both the data and the statistics that address the question of whether those repeats could just be coincidence.

I examined every Toughie published since the start of 2009 to identify those containing answers that also appeared in the regular cryptic published on the same day.  The chart shows the result of that exercise.  The average rate of same-day repeats is six per year.  Click on the chart for a larger version. 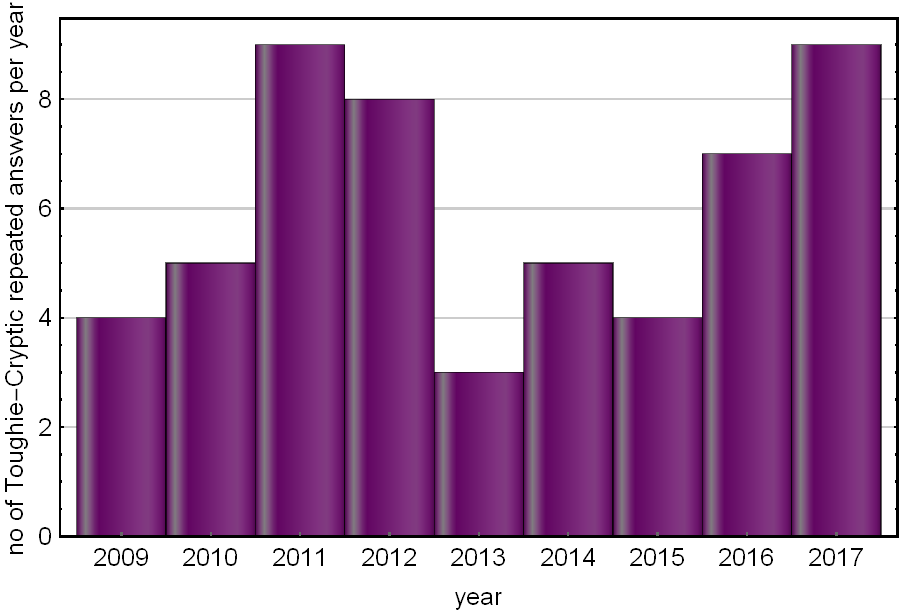 To estimate how many repeats would be expected if puzzle answers were simply chosen at random, I made use of two lists that respectively contain all answers ever used in Toughies and all answers ever used in regular back-page cryptics.  A pair of simulated puzzles can be generated by drawing at random 30 answers from the Toughie list and 30 from the back-page list.  208 pairs like that simulate a year of toughies.  I created many such years, and then computed the statistics of the number of same-day repeats per year.  That distribution has a mean of 6.5 repeats/year and a standard deviation of 2.5 repeats/year.  Those numbers are completely consistent with the observed rate of repeats, meaning that there is no evidence that the repeats are anything other than random coincidences.

In the hints below underlining identifies precise definitions and cryptic definitions, and most indicators are italicised.  The answers will be revealed by clicking on the

buttons.  In some hints hyperlinks provide additional explanation or background.  Clicking on a picture will usually either enlarge it or do something else.  Please leave a comment telling us how you got on.

6a    Protest show, Claude Monet’s included (4)
DEMO:  A show of protest is hidden inside (… included) the remaining words of the clue.  Since protest and show on their own can each define the answer, the clue could also be viewed as a double definition with a hidden word as wordplay.  But I haven’t seen anything like that before and so I’m not sure if that interpretation satisfies cryptic convention.  Can an expert comment?  The story behind the picture is here 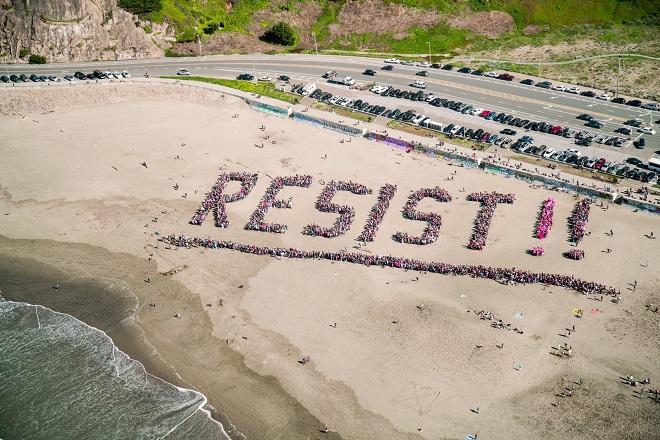 9a    Temperature best for fish (5)
TROUT:  Follow the physics symbol for temperature with a verb that means best (or worst) in battle 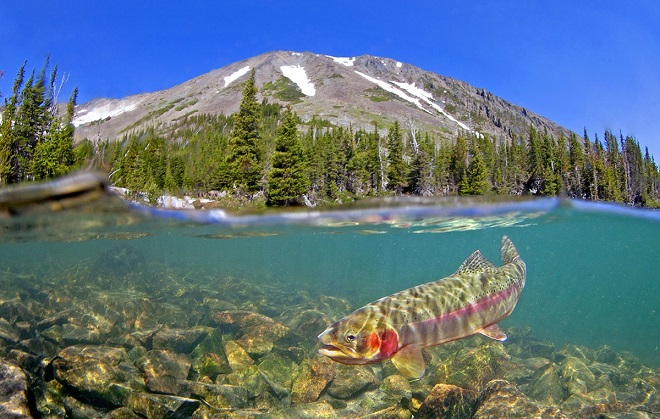 10a   Looking round with bishop helping (9)
OBSERVING:  Link together the round letter, the chess abbreviation for bishop, and a helping or portion (of food, perhaps)

12a   One tough, difficult group of teachers (4,3)
HARD NUT:  Construct the answer from a synonym of difficult and the abbreviation for the National Union of Teachers

13a   Pick up grand English film director (5)
GLEAN:  Combine the abbreviation for grand and the English director of films such as Lawrence of Arabia, Doctor Zhivago, and A Passage to India 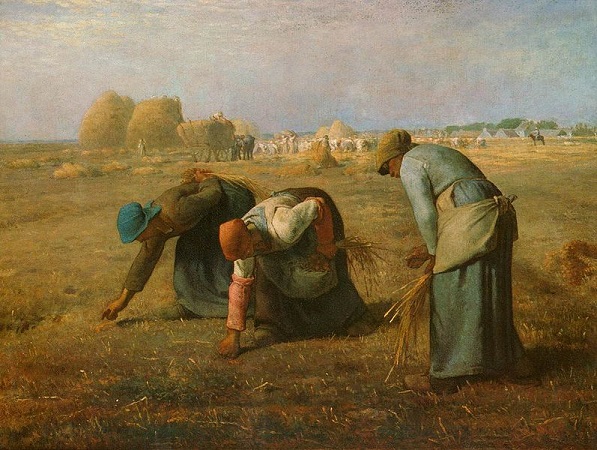 15a   Regularly get seen without cloak one’s got free (7)
ESCAPEE:  Here “without” is being used to mean “on the outside of“.  So, the clue is telling us that a person who has got free is found by wrapping the even letters (regularly) of GET SEEN around the type of cloak favoured by Superman

17a   Artist is held back by old-fashioned depiction of women and money (7)
DOLLARS:  The usual abbreviation for an artist is reversed and inserted into (held back by) an old-fashioned term for attractive women (that I would have said is an Americanism) 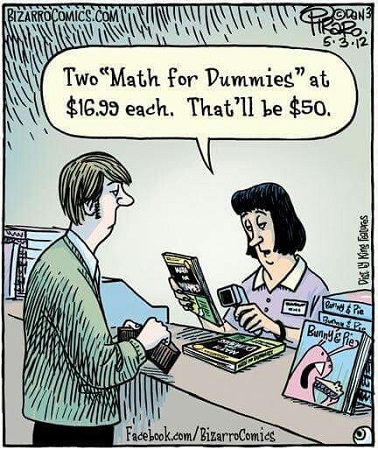 19a   European agreed mineral deposit is blot on the landscape (7)
EYESORE:  Join the abbreviation for European, a word of agreement, and a short word for a mineral deposit that’s usually the source of some valuable material

22a   Sea captain died, womaniser (5)
DRAKE:  Assemble the abbreviation for died and a womaniser or debauched person to get a 16th century English sea captain who famously defeated the Spanish Armada

24a   Tell sir to change climbing-frame (7)
TRELLIS:  An anagram (to change) of TELL SIR

27a   Mine’s a nightmare — it has probably gone off (9)
BOMBSHELL:  Connect together a generic term for an explosive mine, the ‘S from the clue (ignoring the apostrophe) and a place that could be a synonym for “a nightmare”.  The answer can represent a few things that might be described as explosive 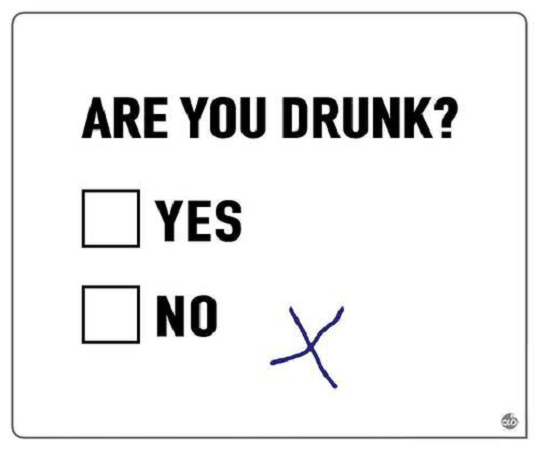 1d    Wine when it gets served up (4)
ASTI:  Start with a  word meaning “when” and then append the reversal (gets served up, in a down clue) of IT from the clue

3d    A cold starter of turkey or ham? (5)
ACTOR:  Concatenate A from the clue, the abbreviation for cold, the first letter of (starter of) Turkey, and OR from the clue

4d    Recount rambling stuff (7)
TROUNCE:  An anagram (rambling) of RECOUNT.  Stuff here is being used in its slang sense of defeat heavily.  An example would be when an entire cricket innings can be described in a single 140-character tweet: 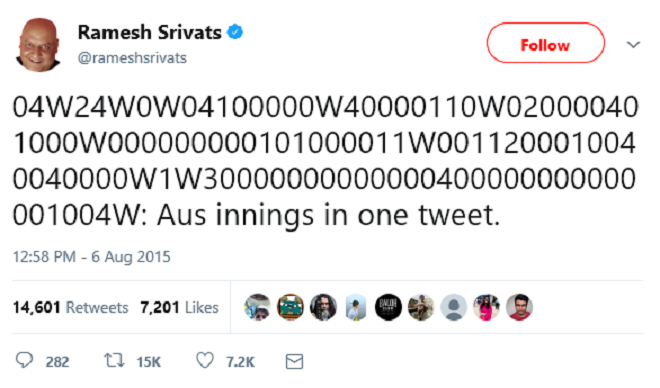 5d    Looked up six new diets (7)
VISITED:  The Roman numerals for six, followed by an anagram (new) of DIETS

7d    Flower in Devon borders one left to uproot (5)
EXILE:  Recall that in crosswordland a flower can be something that flows, i.e. a river.  So here the wordplay says that a Devon river contains (borders) the Roman for one and the abbreviation for left 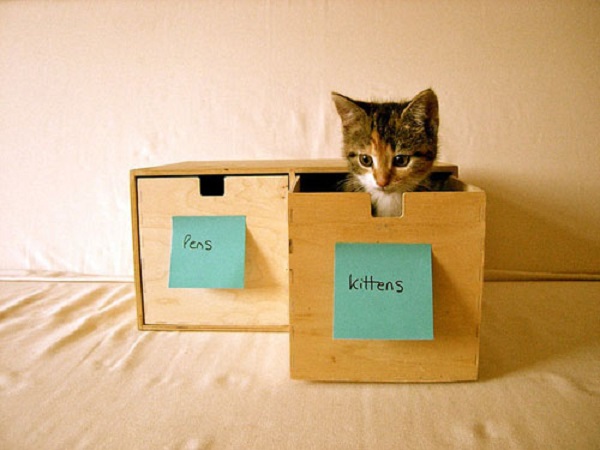 11d   Soldier‘s  routine (7)
REGULAR:  A double definition.  The soldier is permanent, not volunteer or territorial.  Routine here is being an adjective meaning steady or habitual

14d   Ben pleaded to be free, being trustworthy (10)
DEPENDABLE:  An anagram (to be free) of BEN PLEADED

16d   Method from company rising in demand (7)
PROCESS:  Insert the reversal of (rising, in a down clue) the abbreviation for company into demand or insist on

18d   Notice embassy’s entrance (9)
ADMISSION:  Link together a short word for a notice selling something and another word for embassy

20d   Last former lover — tremendous? Not half! (7)
EXTREME:  The usual former lover with the first half (not half) of TREMEndous appended

25d   Always supporting Liberal — anything that can be used to gain an advantage (5)
LEVER:  An adverb meaning always is placed after (supporting, in a down clue) an abbreviation for Liberal

26d   Festival payment — it’s about time (4)
FETE:  A payment for services contains (…‘s about) the physics symbol for time

Thanks to today’s setter.  My favourite, for its amusing surface reading, is 2d.  Which clue topped your list?

The spoiler box below hides a comment box for readers who aren’t yet ready to go public.  I’ve titled it “Suggestion Box” because I’m also always interested in hearing suggestions for making my hints more effective.  Thanks to everyone who used it last week.