Hello, everyone.  Welcome to another Tuesday blog, and to those across the Pond, Happy Independence Day.  Yesterday Rufus offered us a semi-all-in-one clue.  Today’s setter has gone four better than that by including two complete all-in-ones.  There is nothing too antiquated or particularly obscure (ignore the misdirection in 5a - you won’t be needing a list of T S Eliot’s plays today) and the difficulty is about average for recent Tuesdays.  I enjoyed it a lot.

I have a question for the commentariat.  A couple of weeks ago I used a picture of what turned out to be a Hindi crossword to illustrate SANSKRIT.  That has got me wondering about the challenges of setting cryptic crosswords in languages other than English.  Can anyone enlighten us about such cryptics?  For example, are there constructions that work in English that don’t work in other languages, or constructions possible in a different language that wouldn’t work in English?

1a    Remarkable cue (6)
SIGNAL:  Double definition.  The first one might prefix “accomplishment”

11a   Amuse daughter with one's leaflet (8)
DISTRACT:  Chain together the abbreviation for daughter, the first Roman numeral with the ‘S from the clue, and a leaflet that’s often political or religious 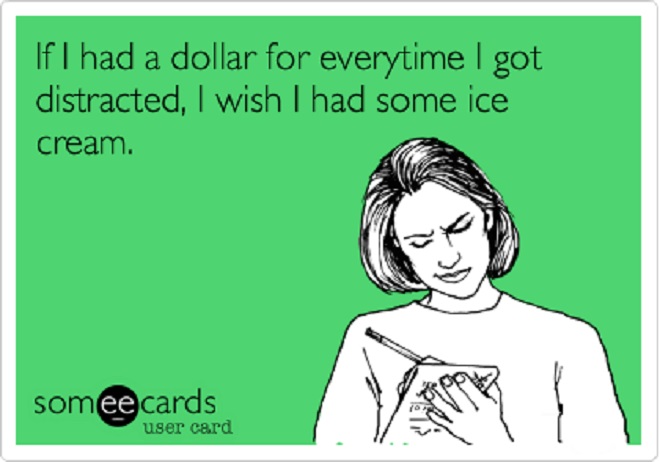 16a   Phone system company installed during elected period (8)
INTERCOM:  A (2) synonym for elected, followed by the usual abbreviation for company inserted into (installed during) the period for which an MP is elected.  Thanks to Gazza for the correction.

20a   Unusual scene involving a meeting with spirit? (6)
SEANCE:  An anagram (unusual) of SCENE containing (involving) A from the clue 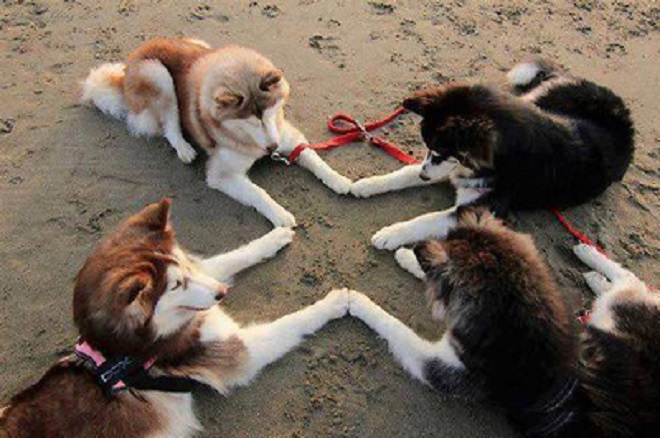 21a   Instrument that's blown with lips to make glasses (4-4)
HORN-RIMS:  An instrument that’s blown, followed by a synonym of lips (on canyons, for example)

22a   Rocket heading for asteroid in what could be scariest flight (6,9)
SPIRAL STAIRCASE:  A synonym of rocket (… out of control, maybe), followed by the first letter (heading for) of Asteroid inside (in) an anagram (what could be) of SCARIEST.  This fine example is found in the Loretto Chapel in Sante Fe: 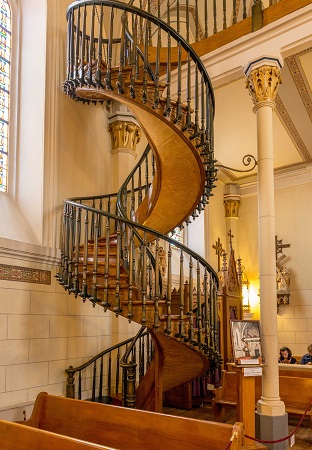 27a   Perturbed, third of class confined to school over it (8)
AGITATED:  The third letter of clAss, followed by an adjective meaning “confined to school” containing (over) IT from the clue

28a   Very famous fraud infiltrating cricket team caught? (6)
ICONIC:  A fraud or swindle placed between (infiltrating) two letters that look like the number of players in a cricket team, followed by the cricket scoreboard abbreviation for caught

29a   One called after another select Oriental drink (8)
NAMESAKE:  A verb synonym of select or choose, followed by a well-known Japanese alcoholic drink

30a   Water heater man heard (6)
GEYSER:  In British English, this source of subterranean hot water is a homophone (heard) of a slang term for man.  In New Zealand English or American English, it’s not.  The UK and US/NZ pronunciations are contrasted here.  This photogenic and accidentally man-made 30a is found in Nevada: 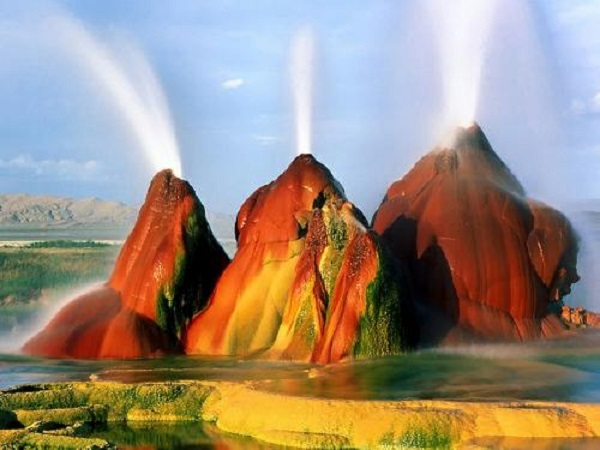 2d    Cover home? Sure can, if worried (9)
INSURANCE:  The usual synonym of home, followed by an anagram (if worried) of SURE CAN

3d    A white wine that may be seen in Trier (11)
NIERSTEINER:  An anagram (that may be) of SEEN IN TRIER.  This wine comes from vineyards on the banks of the Rhine

4d    Ring up about island flower (5)
LILAC:  The reversal (up in a down clue) of another word for ring (on the phone) containing (about) the map abbreviation for island

6d    One apprehended by the force? (5)
THIEF:  The Roman numeral for one inserted into (apprehended by) THE, followed by the physics symbol for force.  A clever all-in-one clue, where the entire clue serves as both definition and word play. 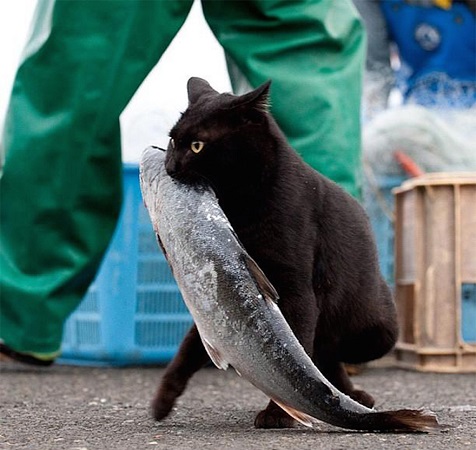 7d    Following behind king (5)
LATER:  Behind schedule, followed by the Latin abbreviation for king

8d    Order to work out (5)
TRAIN:  Another double definition

9d    Porridge or nothing at breakfast? (7)
OATMEAL:  Concatenate the letter than looks like zero, AT from the clue, and what breakfast is an example of (?)

13d   New York representative with the novel Lolita, perhaps (7)
NYMPHET:  Link together the abbreviation for New York, an elected representative, and an anagram (novel) of THE 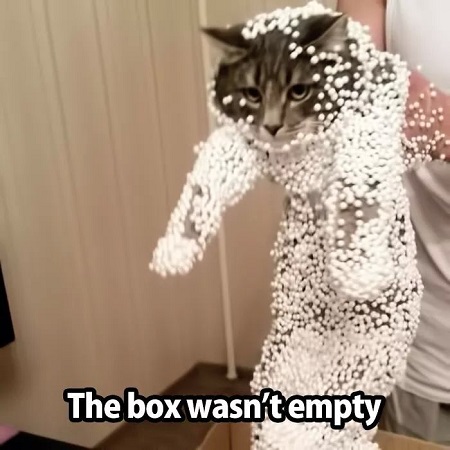 15d   Unlisted? Former partner and board member, number unknown? (2-9)
EX-DIRECTORY:  Assemble the usual short word for former partner, a company board member, and a variable used in mathematics to represent an unknown number

17d   Indian on lake producing fish basket (5)
CREEL:  A member of one Native American tribe followed by the map abbreviation for lake

19d   Ceasefire in Crimea? It's fragile (9)
ARMISTICE:  An anagram (fragile) of CRIMEA IT’S

20d   Spot inhabited by American bear (7)
SUSTAIN:  An unwanted spot on clothing containing (inhabited by) an abbreviation for American 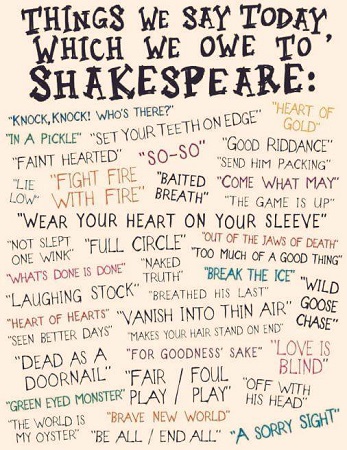 24d   Collect lot once first of auctions is over (5)
AMASS:  A synonym of lot, preceded by (is over in a down clue) the initial letter of (first of) Auctions 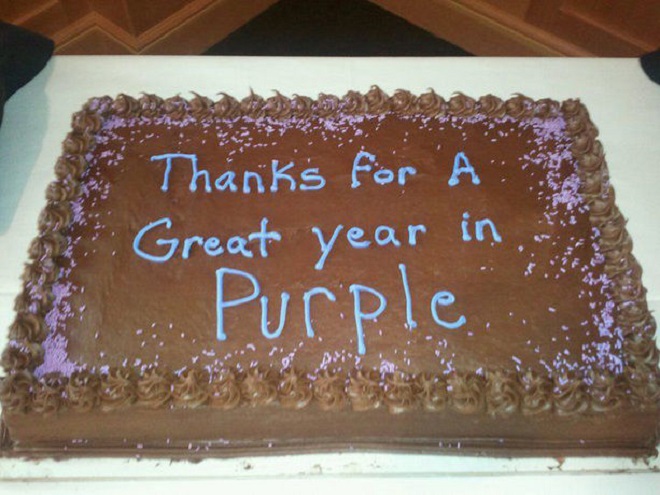 Thanks to today’s setter for a most enjoyable solve.  I liked the misdirection in 5a, admired the all-in-ones 6d and 26d, and smiled at 13d.  My top spot today goes to 23d because there our setter has found a neat and original way to clue a frequently-used answer.  Which clues did you like best? 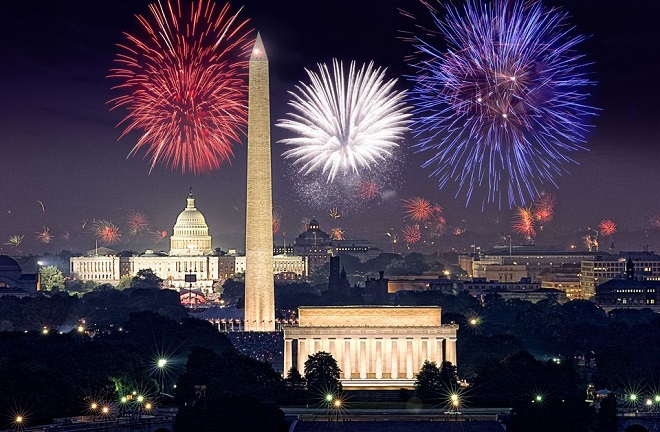