Hello everyone, and welcome to another Tuesday crossword.  Today we have a puzzle both packed with smooth surfaces and mostly free of obscurities (I did have to look up one answer, but I’m foreign and English history was not a big part of my education).  There are a couple of new-to-me clue constructions that provided an enjoyable parsing challenge.  Based on those familiar ingredients, I’m going to stick my neck out and suggest that this is the work of Mister Ron.  Bearing in mind  his comments from a fortnight ago, I counted the number of unique letters employed and got 18, so perhaps today is a warm-up for an assault on the minimum letter count record?

Several comments on Saturday’s blog complained about the verbing of nouns such as medal and podium and decried them as unwelcome Americanisms.  As an American I felt somewhat aggrieved by that discussion, and so I’ve been researching the origins of medalling and podiuming.  First, I used Google’s Ngram Viewer to get historical occurrence rates in printed literature of the American “medaled” versus the English “medalled”.  Click on the spoiler box to see the data.

Click for historical usage data of "medalled", "medaled" and "to medal"

Click on the chart to open it in Google Ngram Viewer

Well, that was a surprise.  To make sense of it, all one has to do is, if I may verb a noun, to Google.  One soon finds that the steady rise of “medalled” shown in the chart began with a 1822 letter from Lord Byron to Sir Walter Scott (3rd paragraph).  The verb then grew steadily in popularity, appearing, for example, in the works of Thackeray and of Disraeli (4th paragraph in Chapter 8).  There’s certainly been a recent uptick in usage of all three verb forms of medal, presumably due to the televising of the Olympics and similar events, but it appears questionable at best to pin the verbing of medal on America.  Turning to podium, the consensus is that its rise as a verb began with a 1992 article in an Australian newspaper.  You can find the details in this article from the New York Times, which also demonstrates that folks on this side of the pond get just as spun up about such things.  Finally, I learned some of the history given above from this column in the Guardian.  In it, the author also points out that the 1950 edition of the Manchester Guardian stylebook forbade the use of such Americanisms as balding, boost, call on the telephone, teen-ager, and top secret!  It’s clear that battles over language purity have been being waged and lost for many years.

1a    Love black fish aroma approaching the sell-by date? (11)
OBSOLESCENT:  A charade of the usual letter associated with the tennis score love, the single-letter abbreviation for black, a flat fish, and a synonym of aroma.

8a    Set up mother with part in performance (9)
RIGMAROLE:  Link together a three-letter setup, the shortest informal term for mother, and a part in a play. 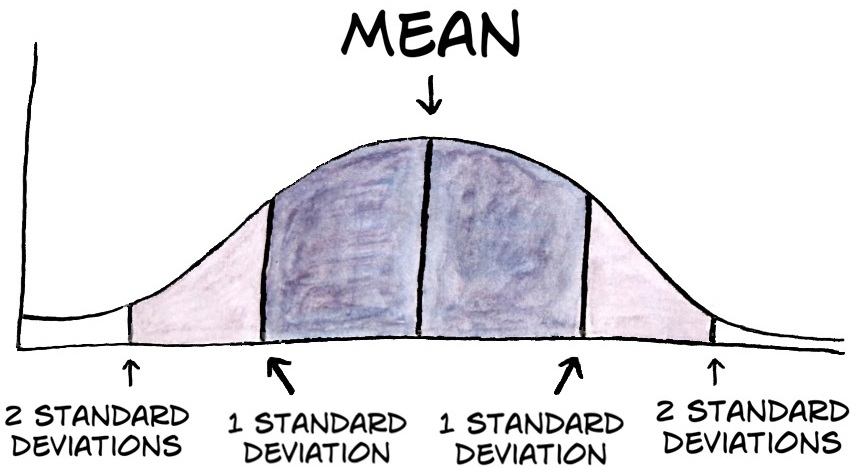 11a   Go back on something nice (7)
RETREAT:  Another charade.  This time we’re to follow a usual word for on or concerning with a word meaning something nice.

12a   Beg daughter to enter enclosure (5)
CADGE:  The abbreviation for daughter is placed inside (to enter) an animal enclosure (at the zoo, perhaps). 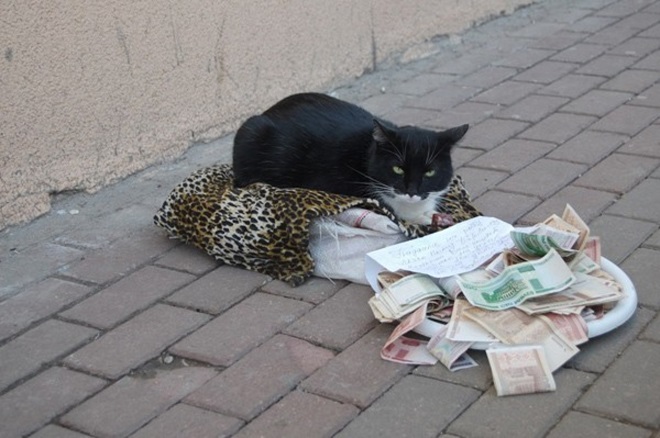 13a   Charge around area followed by gold flashing light (9)
INDICATOR:  A synonym for charge in the legal sense, containing (around) the abbreviation for area, and followed by the usual abbreviation from heraldry for gold.

16a   Sailor falls trapping animal, and gives up (9)
ABDICATES:  One of crosswordland’s usual sailors, followed by a word meaning falls (in a very final way) that contains (trapping) the favourite animal of the Tuesday bloggers and of Mrs Ron.

18a   Country's friend (5)
CHINA:  A double definition.  The second is a usual suspect derived from Cockney rhyming slang.

19a   Sat shaking after dance? This could be heavy! (7)
BALLAST:  A formal dance, followed by an anagram (shaking) of SAT.

22a   Stomach terribly bad portent (7)
ABDOMEN:  An anagram (terribly) of BAD, followed by a portent or sign of things to come.

24a   Number three's in a mess (5)
ETHER:  An anagram (in a mess) of THREE.  If you haven’t seen this one before, read number as a noun with a silent B, and then recall how in crosswordland flower can mean river because it’s something that flows. In a similar way, a number could be ..... 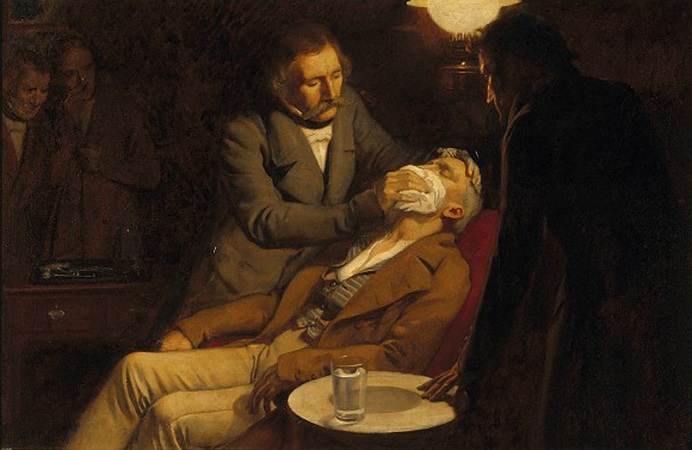 1d    Old writer finished without deadline (4-5)
OPEN-ENDED:  A charade of the abbreviation for old, something you can write with, and a synonym of finished.

2d    Rescue original piece of valuable silver found in auction (7)
SALVAGE:  The first letter (original piece) of Valuable and the chemical symbol for silver inserted into (found in) a noun synonym of auction.  The picture shows the recovery of MV Tricolor, which sank in the English Channel laden with 3000 luxury cars.  It was sliced into nine sections for lifting. 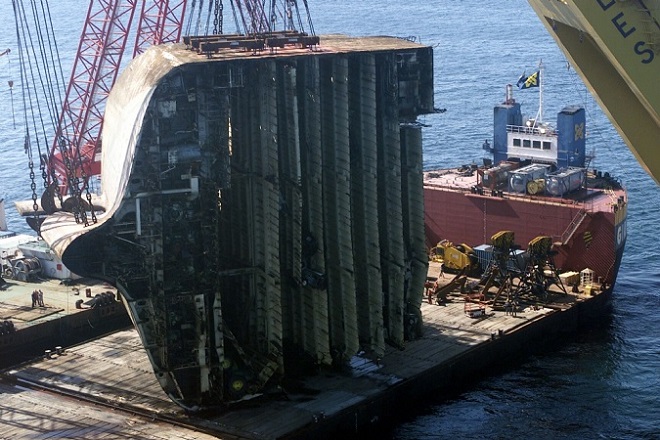 3d    Thief's run inside as client worked (9)
LARCENIST:  An anagram (worked) of AS CLIENT with the cricket abbreviation for run inserted (inside).

5d    Feel a stick-in-the-mud's somewhat flexible (7)
ELASTIC:  The answer is lurking in part (somewhat) of the clue.

6d    Every now and then, stubborn veggie finally gets something meaty (1-4)
T-BONE:  “Now and then” suggests something alternating.  Here it’s being part of an instruction to take the even letters (every now and then) of sTuBbOrN.  Do that, and then append the last letter (finally) of veggiE.

7d    Court in celebrity bedroom (4,7)
STAR CHAMBER:  Link together simple synonyms of celebrity and of bedroom.  To understand this one I had to look up this old English court of law in Wikipedia.

9d    Record and somehow retain performer (11)
ENTERTAINER:  Record in a logbook, for example, followed by an anagram (somehow) of RETAIN.

14d   Destroy detective's cover (9)
DISMANTLE:  One of our usual detectives, with the ‘S from the clue, followed by an archaic term for a cloak.

17d   Risks part of church abandoning liberal son (7)
CHANCES:   The part of a church around the altar, minus (abandoning) the single letter abbreviation for Liberal, and followed by the abbreviation for son.  Either there’s a typo in the clue (liberal instead of Liberal) or the convention about not decapitalising proper nouns is being violated here.

18d   Gets thicker after what's chewed sticks (7)
CUDGELS:  What cows chew, followed by a verb meaning gets thicker or forms a wobbly kind of solid.

20d   Ring up about painter's third colour (5)
LILAC:  Reverse (up, in a down clue) a synonym of ring (on the telephone) and insert the third letter of paInter 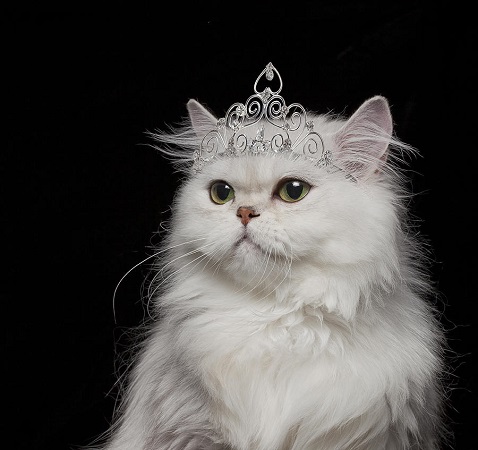 Thanks to the setter for a fun solve and for an introduction to some new clueing devices.  Smiles throughout, and I particularly enjoyed 6d and 21d for the satisfaction derived from managing, after some pondering, to parse their word play.  Of the two, 6d comes out on top because of the smooth surface.  Which clues did you like best?