Good morning from the heart of Downtown L.I. Although it is overcast the sun is still shining merrily away. Rufus shines today as well. He is in playful mood but very fair as usual.

1a    It’s possible a belief’s being shaken (8)
FEASIBLE: Todays first clue contains an anagram of A BELIEF’S. However both the words preceding (It’s possible) and the words following (being shaken) can be used as anagram indicators. So wily old Rufus sets a puzzle within a puzzle to decide which is the indicator and which is the definition. Once the anagram is solved it is obvious

6a    People take pains to please him (6)
SADIST: Ooh er missus. A noun which describes a person who enjoys inflicting pain on others

9a    Minister is to eat about six (6)
DIVINE: Take a verb meaning to eat and place it around (about) the roman numerals for the number six to find another verb meaning to attend to the needs of others.

10a    Labour candidate? He’s admitting dirty money taken in return (8)
HERCULES: We are given HE’S from the clue. We then need to find a word for dirty money (usually preceded by the word filthy) reverse it (taken in return) and drop it (admitting) into HE’S. Altogether we are looking for the son of Zeus who was famed for his twelve labours 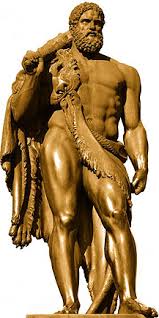 11a    I’m sent back with money for betting slips (8)
MISTAKES: A simple reversal of I’M (sent back) followed by the plural noun for the amounts wagered or gambled on the outcome of a risky game or venture. This noun is often used by the horse racing fraternity.

12a    Parking in Indian city — or Greek one (6)
DELPHI: Place the P from P(arking) inside one of Indias larger cities to find a Greek city.

16a    Masqueraded as dressing up predominates (12)
IMPERSONATED: Anagram (dressed up) of PREDOMINATES

19a    Maximum effort at the end of the innings (3,3)
ALL OUT: Using all of one’s strength or resources will provide a term which is also used to describe a cricket team after the last wicket is taken

21a    Got out of bed? (8)
UPROOTED: This bed can be found in the garden growing vegetables. The answer is a verb which means to have pulled a plant out of the ground

23a    One shows the way in business (8)
DIRECTOR: One who sits upon the board of a company

24a    He cometh in theatre or cinema production (6)
ICEMAN: An anagram (production) of CINEMA will give the name of what cometh in the title of a Eugene O’Neil play/film

25a    Not off to visit, but ready to make one (2,4)
ON CALL: Take the opposite of on and a word for visit. Together they define a state of being where one could be asked to go to work at very short notice like a retained firefighter for example.

26a    Not for heavy drinkers? (5,3)
LIGHT ALE: Take a word meaning not heavy and follow it with a word for beer to solve this nippy little all in one clue

2d    Panacea for rising team in trouble (6)
ELIXIR: The team here is an eleven expressed in Roman Numerals. This eleven needs to be dropped into (in) a verb meaning to trouble or annoy someone and the whole lot inverted (rising)

3d    Change  dress (5)
SHIFT: A double definition. To change or alter position and an old fashioned word for a dress or nightgown

4d    Low joints for workers? That’s ideal! (4,5)
BEES KNEES: Leg joints and one of the two the usual suspects for workers will lead to this term describing the cream of the crop also known as “The Dogs Doo Das”

5d    Stray sheep seen by us in biblical city (7)
EPHESUS: An anagram (stray) of SHEEP followed by the word US from the clue will give us this biblical city from Ancient Greece

6d    There’s a scrap when a communist is told to be quiet (5)
SHRED: Take a two letter word (oh yes it is a word) used when we want someone to be quiet. Add a three letter usual suspect for a communist to find another word describing a small piece or amount of something.

13d    Wonders when phone exchanges changed name (9)
PHENOMENA: These wonders can be find by solving the two anagrams in this clue. (exchanges) PHONE and (changed) NAME. How very clever is that?

14d    Phone about disruption of trade causing delay (9)
RETARDING: We seem to have a few anagram insertion clues here today. We need our usual word for to phone with an anagram (disruption) of TRADE inserted

15d    One slum I refurbished — with this? (8)
EMULSION: A very good all in one clue. Find the answer by solving an anagram (refurbished) of ONE SLUM I

17d    No gear, so refusing to fight? (7)
NEUTRAL: A double definition. The first being the term used in motoring when your car is in no gear at all.

18d    Happen to exist before autumn comes (6)
BEFALL: Take a two letter term meaning to exist and add the old English term for autumn now used more by Americans to find a verb meaning happen. The term for autumn was widely used in England and taken to America by the early settlers where it stuck. We hit on autumn and it too stuck. So my eldest daughter told me.

20d    Sum for child, a beginner (5)
TOTAL: Take a three letter word for a small child and add A from the clue and our usual letter which represents a beginner or L(earner)

No music today. A line from the film Boyhood which we watched last night has struck a chord. “Arrivals and Departures lie side by side”. A really nice film.

Have a good bank holiday everybody.