Good morning everyone.  It’s another beautiful morning on the Vega Baja and apparently it’s the same in Oxford. Cockroach and alley cat both basking in the sunshine!
This puzzle didn’t really float archy’s boat and was going to get ** enjoyment but mehitabel has prevailed so *** it is.  At least we agree it wasn’t too taxing.

As usual the definitions are underlined in the clues and the ones we like most are in blue. Please leave a comment telling us what you thought. You can also add your assessment by selecting from one to five stars at the bottom of the post.

9a           Crossing river is low northern ass (5)
{MORON} – The low here is not the opposite of high but the noise made by a cow containing (crossing) the one letter abbreviation for river and followed by N(orthern).

11a         Wine from second retailer running short (7)
{MOSELLE} – Two letters meaning a second or short space of time followed by another word for a retailer or trader without its final letter (running short). 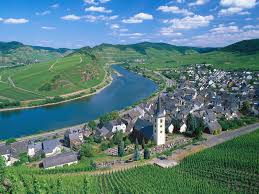 12a         Find in diary new expression — describing far-sighted policy? (4-4)
{LONG TERM} – Start with a word for a diary or record and insert (find in) N(ew). Follow with another word for an expression or word. A bit Yoda-speak methinks

17a         In the morning, if in work, will get raise (7)
{AMPLIFY} – This word meaning raise or increase the volume is made up from the usual two letters for in the morning followed by a three letter word for work steadily containing (in) IF from the clue. 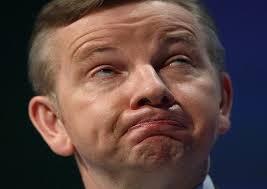 21a         Dickensian character engaged in plain dogsbody’s work (8)
{DRUDGERY} – The surname of the title character of a historical novel by Charles Dickens is contained in (engaged in) a short word meaning plain or dull. 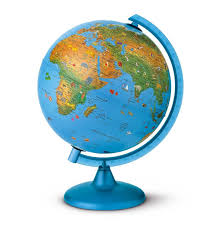 2d           Outlaw getting brief delight in instrument (5)
{BANJO} – A word meaning to outlaw followed by a word for delight without its last letter (brief).

5d           News story, ‘Sex appeal and the writer’, getting sent up (4)
{ITEM} – The two letter abbreviation for sex appeal (not SA but the other one) is followed by a reversal (getting sent up) of how the writer or setter might refer to himself.

6d           Diplomat having attention broken by girl close to embassy (8)
{EMISSARY} – A word for an unmarried girl inserted into (broken by) someone’s attention followed by Y (close to embassY).

7d           Degenerated to elderly drunk … (9)
{TROLLEYED} – A slang word meaning seriously drunk is an anagram (degenerated) of TO ELDERLY.   I thought this was a sneaky one as the first and last words in the clue could each be the definition or the anagram indicator.

12d         Premier cricketer Clive getting control of flight? (5,6)
{LLOYD GEORGE} – This guy was Prime Minister from 1916 to 1922.  A famous West Indian (and Lancashire) cricketer followed by the slang term for an aeroplane’s autopilot.   An awesome batsman and a very funny film! 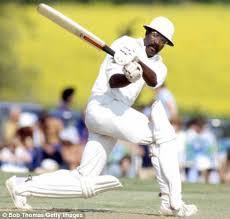 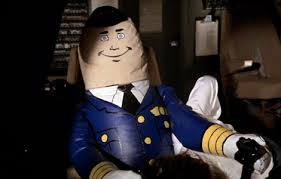 13d         Duck and farm animal mainly raised on fat (7)
{MALLARD} – A young farm animal without its final letter (mainly) and reversed (raised in a down clue) is followed by (on) some fat used for cooking in the days when it was not regarded as being too bad for us! 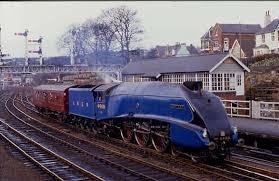 17d         In the East End, very narrow river passenger-carrier (8)
{AIRLINER} – Start by thinking of an eight letter word that begins with an H and means very narrow or fine – drop the H, as that’s what people who live in the East End of London are supposed to do, and follow it with the abbreviation for river.

18d         Ornament at home kept in shape (8)
{FIGURINE} – The usual two letters for ‘at home’ inserted into (kept in) a shape gives an ornament or small statuette.

19d         Intellectual, say, taken with German capital (7)
{EGGHEAD} – The usual two letters meaning say or for example followed by a one letter abbreviation for German and another word for capital.

24d         Meat lit with brandy (not outside) (4)
{LAMB} – A cookery term for a dish which has brandy poured on it and then set on fire but without its first and last letters (not outside). 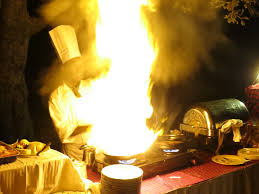 archy hasn’t got a stand out favourite but if pushed would go for 4d while mehitabel favours 10a.   Unfortunately it’s a bit lacking in photo opportunities but archy has done his best.