The usual enjoyable fare from Jay with no especially hard bits – a 1.5*/3* for difficulty/enjoyment. Thanks Jay.

{REMINISCENT} : [cars, the original of which was a 1960s British icon] contained in(coming in) [of late;not too long ago].

Defn: Describing that which reminds you of something.

Like these pictures of an iconic car and skirt: 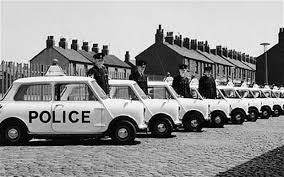 And… Secretary to boss (seeing his open fly): “Did you by any chance, leave your garage door open?”
Boss (getting the message, and trying to go one up):  “Actually I did.  Did you see the Jaguar inside?”
Secretary (quicker than the boss):  “No, but I did see a mini with 2 flat tyres.”

9a    Unconventional females worn out by love (7)

{OFFBEAT} : { 2 x [abbrev. for “female”] + [informal term for being worn out;exhausted] } placed after(by, in an across clue) [letter representing 0;love in tennis scores]. 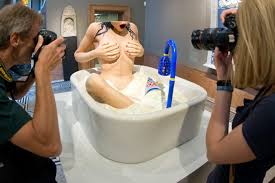 {DEALING} : [an area of West London] placed after(linked to, in an across clue) [the International Vehicle Registration code for Germany].

{NORMS} : [a Scandinavian, especially from the days of the Vikings] minus its last letter(mostly) containing(adopting) [abbrev. for “married”].

{POINTLESS} : Cryptic defn: Descriptive of an instrument or implement that is far from, say, a dagger. A nicely apt surface.

{ON PAPER} : [working, as with an electrical appliance] plus(with) [soft or semi-liquid food, especially for babies and invalids] + “exhibitor” minus all but its 1st and last letters(loses heart).

Defn: Not tried out in the real world yet.

{ALBANIA} : Hidden in(Part of) reversal of(backward) “agenda in a blasted”.

The answer’s in the crest (or should that be chest?), and he was Big in that country.

{ITERATE} : [a unit charge, eg. per hour] placed after(applied to, in an across clue) “sites” minus its 1st and last letters(unprotected …).

{SEARCH PARTY} : [to look for;in the electronic age, to google] + [a political group, an example of which are the British Conservatives].

2d    Laments English that is accepted by members (7)

Answer: …, one of which was Written In A Churchyard.

3d    Mingle where the fire may be after endless winter (9)

{INTEGRATE} : [where the fire may be, at the bottom of the chimney] placed below(after, in a down clue) “winter” minus its 1st and last letters(endless …).

4d    A case of members supporting one million religious leaders (5)

Answer: … with an apostrophe, in addition to the hyphen.

{NOVELTY} : “Tolstoy” minus all but its 1st and last letters(losing heart) placed below(after, in a down clue) [a book of fiction, something Tolstoy might have written] .

Defn: A matter to be attended to.

Answer: Originally designed to prevent permanent discolouration in areas on the computer monitor caused by cumulative non-uniform usage – in case you wondered.

She washes your monitor from the other side, and he….does nothing; but at least one is probably more interesting than tropical fishes swimming around.

{CASUARINA} : [relaxed;informal] minus its last letter(Mostly …) + [abbrev. for a member of the British Royal Academy of Arts, ie. an artist] containing( captures ) [popular;fashionable].

18d    Earnestly solicit the knowledge of the little people! (7)

{IMPLORE} : Cryptic defn: Reference to folk knowledge, handed down from generation to generation, of the mythological little people;small michievious devils.  The answer has a word construction similar to “humankindness”.

She is pleading to a god, and he to a mortal.

{TIPSTER} : [a note on the musical scale, famously drunk with jam and bread by Julie Andrews] + [abbrev. for a 2nd note, this time as an afterthought to a message] placed above(on, in a down clue) “theory” minus its 2nd, 4th and 6th letters(regularly ignored).

Defn: One who deals in information about racehorses.

{RANCH} : [descriptive of a colour that is diffused;lost, especially in clothing, which is why there is segregation in your laundry] placed above(on , in a down clue) [abbrev. for a “church”].

Defn: A spread of land, especially in the American West, for raising livestock.