The sun is out and the river is down so we have avoided flooding yet again. Here is a very nice puzzle from Rufus at his most benign with a couple of stings as we go along. Thanks to all for your kind remarks about my review last week of 27,373. Very encouraging.

1a Note deficiency, get governors to provide school equipment (10)
{BLACKBOARD} Take a musical note, add a word meaning deficiency or dearth and another word for governors or directors to reveal a rather old fashioned classroom focal point 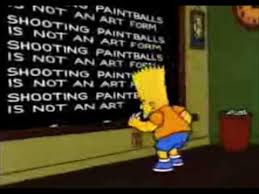 10a Cancellation of count leads to rebuke (7,3)
{TELLING OFF) A double definition. What the cancellation of a count of ballot papers might be called or a reproval

15a Tact as well as art may be needed to draw (7)
{ATTRACT} Anagram (may be needed) of TACT and ART meaning to draw, like a magnet perhaps

16a You may see them by sea and in ship (5)
{SANDS} The word AND from the clue inside (in) the two-letter abbreviation for steamship will give what you may see from the ship when close to shore.

19a Avoid Kansas city (5)
{DODGE} No hint necessary. (Oh alright then) Double definition. To avoid somebody or something or a city in Kansas

21a Insect on head of animal is an annoyance (7)
{BUGBEAR} An irritation. A three-letter word for an insect and a four-letter animal. Pooh perhaps

22a Comes into force? (7)
{ENLISTS} Joins the armed services

28a Founder of place of iniquity? (4)
{SINK} To founder as in a boat and a noun meaning a place regarded as wicked and corrupt

2d Grounds or pastures, say (4)
{LEES} The dregs or grounds of wines or a homophone (say) of word meaning meadows

3d Bill comes up with new coil of fabric (6)
{CALICO} A fabric. A shorter form of bill or account reversed (Comes up) and an anagram (new) of COIL

4d Key groups? (7)
{BUNCHES} a cryptic definition of what doorkeys are usually gathered in

5d A second son for the prophet (4)
{AMOS} A from the clue, a second or an instant and S(on) to give a prophet, sheep herder and sycamore fig farmer.

6d Faults or defaults (7)
{DEFECTS} Double definition, the second one meaning to disown allegiance to one’s country and take up residence in another.

15d Maxim for our time (5)
{ADAGE} A saying. Anno Domini and a long period of time

19d Ready as can be, I suppose (7)
{DARESAY} Anagram (can be) of READY AS meaning I suppose I suppose.

20d In French clubs, miss will get embrace (7)
{ENCLOSE} The two-letter French word for in and the initial letter from C(lubs) and a word meaning to fail

23d Popular act, certainly (6)
{INDEED} Our regular crosswordland two-letter word for popular and a word for an action will make another word meaning certainly or without doubt

25d A girl comes up with a woebegone expression (4)
{ALAS} A very old word used to express grief or regret. A from the clue and a shortened form of the name Sarah reversed (Comes up)

26d Remain a supporter (4)
{STAY} Double definition. To linger or to prop up

That is blog number two. Please feel free to comment