A straightforward enjoyable, as usual, one from Jay, to whom thanks.  A 1.5*/3* for difficulty/enjoyment.

1a    Offers supply vessel and leaves without permission (7)

{GALLEON} : [unit of measurement equal to eight pints] containing(full of) [abbrev. for “energy” in physics].

{OVERSLEEP} : Cryptic defn: What one does in bed if the alarm clock breaks down.

14a    Sportsmen currently accommodated between son and lodgers (12)

{SNOWBOARDERS} : [currently;at this very moment] containing()accommodated between [abbrev. for “son”] + [those who lodge, in, say a hostel].

18a    Authority from church to enter ruined tabernacle (5,7)

Answer: From the French.

Defn: Of a motor car, say, having had a trial run.

Defn: … earlier in the year than the Christmas turkey.

{CANOE} : [the letter representing 0;nothing] contained in(carried by) [a rod, possibly of bamboo]. 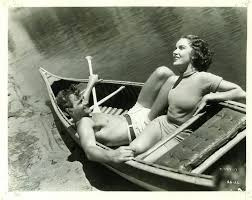 Defn: … of an alcoholic nature.

Answer: By which to track, usually, an animal.

5d    Person with no experience of putting area on alarm (9)

{GREENHORN} : [a common open are, eg. in a village] placed above( , in a down clue) [an instrument to sound the alarm with, eg. from a ship travelling in fog.

{LASH} : [remains after burning] placed below(suppressed by, in a down clue) [abbrev. for “left”].

7d    Does away with administrators, sacking four in Rome (8)

{EXECUTES} : [the administrators in an organisation] minus(sacking) [the Roman numeral for “four”].

Answer: Does away with;terminates with extreme prejudice, as the spooks say.

{NEPOTISM} : Cryptic defn: The practice, by a person in authority, of filling positions with family members.

{ARCHDEACON} : A + [abbrev. for a Catholic] + anagram of(developed) HEAD + [an argument against].

{WALKOVERS} : Anagram of(Reorganised) LAKERS VOW. Which may well be true of the US basketball team, the Lakers.

Answer:  Another meaning of which is this:

{ACID TEST} : [abbrev. for the department of detectives in the police force] contained in(in) { A + [a trial].

{ETHNIC} : Anagram of(New) “kitchen” minus the last letter of(has no end of) “stock”.

Answer: Descriptive of cultures of different groups, not necessarily only foreign ones.

{ADHERE} : [indicative of being present at a roll call, say] placed below(under, in a down clue) [short for a notice promoting, say, a product].