Just back from a pleasant weekend in deepest Wiltshire (or Wadworthshire, as the local hostelries would have it). A ** crossword for me, though a couple of less frequently used words may complicate matters.

4a           Choose not to take part in work with aggressive seller (3,3)
{ OPT OUT } The Latin abbreviation for a work, often used in cataloguing a composer’s output, followed by someone who pushes, for example, tickets for a football match or rock concert.

8a           Judge, we recalled, pointed instrument (4-4)
{ JEWS HARP } A musical instrument made up of an abbreviation for Judge, WE (from the clue) reversed (recalled) and an adjective for pointed. 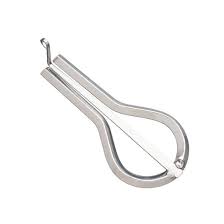 10a         Gold cross initially concealed in plant (6)
{ ORCHID } A charade of the heraldic term for gold, the first letter of Cross, and a verb meaning concealed.

11a         Cautious fighting against unknown quantity (4)
{ WARY } A term for fighting, especially between nations, followed by an algebraic unknown.

23a         Flower husband presented to poorly Cynthia (8)
{ HYACINTH } Husband followed by an anagram (poorly) of CYNTHIA.

24a         Annoy the Parisian after final (6)
{ NETTLE } The French definite article after the final figure required to settle a bill.

3d           Club about to lose support? Just the opposite (7)
{ BRASSIE } An old name for a variety of golf club. The clue tells us to look for the opposite of ‘about to lose support’, which in crossword terms is ‘support to lose about’. The support is the full version of the female undergarment which so often appears in crosswords, which then loses the Latin word for about or concerning.

5d           Gnome in lead crossing river beyond (7)
{ PROVERB } Not the little chap found adorning gardens, but a pithy and sententious saying, according to the BRB. The chemical symbol for lead is wrapped around an abbreviation for River and a word meaning beyond.

14d         Religious ceremony in US city, unfinished (9)
{ SACRAMENT } Remove the final O from the state capital of California.

15d         Merry at last in idyllic island (8)
{ ATLANTIS } Anagram (merry) of AT LAST IN. This is the online version of the clue.  The newspaper has ‘happy’ rather than ‘merry’, which is perhaps less good as an anagram indicator.

18d         Abbreviated answer printed in tough political publication (7)
{ HANSARD } The publication which reports proceedings in Parliament. An abbreviation of ‘answer’ inside an adjective meaning tough.

19d         A vet disturbed over service in bar (6)
{ TAVERN } Anagram (disturbed) of A VET followed by (over, in a Down clue) the abbreviation for one of the armed Services.