Good morning from South Staffs, still bitterly cold, with snow lying on the garden from the weekend. I don’t think I’ll be planting potatoes on Good Friday this year.  Still, at least we now have a functioning kitchen again.

I was held up by 16d, which pushed the solution into *** territory for me.

9a           What sort of reception will second repeat being broadcast get? (6-4)
{ TICKER-TAPE } A charade of another word for second (as in ‘Just a __’) and an anagram (being broadcast) of REPEAT, to give an accolade traditionally awarded to American heroes. 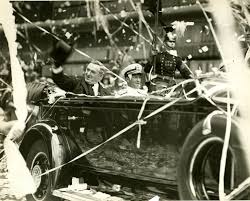 12a         Outcome of increased exposure (6)
{ UPSHOT } A two-letter word meaning increased, followed by the sort of exposure you might take with a cine camera.

15a         Deficit admitted by company, American giant (8)
{ COLOSSUS } Abbreviations for company and American either side of a synonym of deficit.

23a         Views to look at, mostly in part of North Wales (8)
{ ANGLESEY } A noun meaning points of view followed by the first two letters (mostly) of a three-letter verb meaning ‘to look at’. The Welsh call this place Ynys Môn.

25a         Soldiers capturing area of little importance (4)
{ MEAN } A collective term for soldiers with Area inside.

26a         Opera singer, and one leading pop star after publicity (5,5)
{ PRIMA DONNA } Start with a two-letter acronym for publicity, then add I and the pop star familiarly known as Madge.

27a         Naval doctor catches first of tuna, large fish (8)
{ STURGEON } The initial letter of Tuna inside the term used to describe a doctor in the Navy.

2d           Buddy (American) and I correspond (5)
{ AMIGO } A charade of an abbreviation for American, I (from the clue) and a verb meaning correspond or match, giving a Spanish word for buddy. 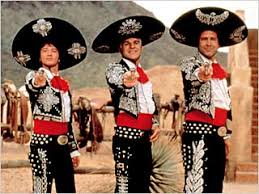 4d           Cotton clothes casually reduced (6)
{ THREAD } Remove the final S (reduced) from a slang word for clothes to give the sort of cotton used for sewing.

14d         Completely OTT about pieces in plot (9)
{ ALLOTMENT } A word meaning completely followed by OTT (from the clue) wrapped around the pieces on a chess board, giving the sort of plot you might be digging if it weren’t covered in snow.

16d         Unpalatable, character interrupting lecture? (5-4)
{ STONE-COLD } A noun meaning character or quality inside a verb meaning to lecture or tell off. I’m not convinced of the definition here, and this clue was the last one in for me.

17d         Breaking down, colonel prior to oversight (8)
{ COLLAPSE } The abbreviation for colonel followed by an oversight or slip.