Hola from the Vega Baja.   Looking at the puzzle number I was half expecting some sort of trickery but there’s nothing there that I can see – but that means very little!
While solving I thought it was very tricky and was well surprised when I saw my time when I clicked the submit button, so 3* it will have to be. Some great stuff from RayT as usual, including the Queen and a fair bit of innuendo. Splendid fun and very nearly worth 5* enjoyment but I’ll save that in case his next one is even better!
Definitions are underlined in the clue (but I don’t know how to do the new way to hide the answers).
The clues I like most are in blue and the answers can be seen by highlighting the space between the curly brackets. Please leave a comment telling us what you thought. You can also add your assessment by selecting from one to five stars at the bottom of the post.

9a           Queen’s back, refined with rap (9)
{REPRIMAND} – This is nothing to do with modern music (?) but rap as in punishment . Reverse the cipher for our current Monarch (Queen’s back), follow witih a word for refined or proper and then a word meaning with or ‘as well as’.  Is Rap music actually music? – Discuss.

11a         Repelled by North American consumed about nosh (9)
{NAUSEATED} – Listen very carefully . . . You need N(orth), A(merican) followed by a word for consumed or employed into which is inserted (about) a word meaning nosh (it’s a verb in this instance).  Far easier to solve than hint – there’s a couple more later on in the downs!

13a         Catch terrible cheat causing anguish (9)
{HEARTACHE} – Catch in the sense of catching what someone says. After that it’s an anagram (terrible) of cheat.

18a         Loose woman, one related, going topless (5)
{UNTIE} – It’s loose as in to set free and it’s a female relative without her first letter (going topless).  I now have a rather unnerving mental image of my 84 year old one of these going topless – thanks Ray!

19a         Supple, candlelit, he sometimes embraces (9)
{LITHESOME} – The answer is hidden in (embraces) the other three words of the clue.

22a         Leaving helpless redhead in station (9)
{STRANDING} – This is leaving helpless as in the case of Robinson Crusoe perhaps. You need to insert R (Red head) into a word for your station or position in society.

25a         Sailor at sea, some say, descending by rope (9)
{ABSEILING} – Start with the usual sailor and finish with some letters which aren’t actually a word but are pronounced the same way (some say) as what the sailor is doing when out at sea. 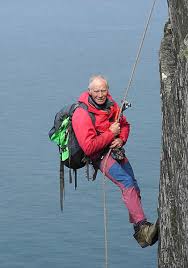 26a         Batsman ends suppressing naked muscularity (5)
{BRAWN} – Take a B and N (BatsmaN ends) and place them around (suppressing) another word for naked.   Also the name of the F1 team where Jenson Button became world champion – cue photo! 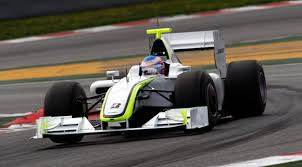 3d           Wood shed contains fearsome interior (5)
{HURST} – A slightly obscure word for a wood or grove of trees.  Another word for a shed or wooden building with RS (feaRSome interior) inserted (contains).

4d           Former wife on exercise regime including new method (9)
{EXPEDIENT} – Listen very carefully again . . . The usual abbreviation for former spouse followed by some physical exercise. After that you need a regime or parliament with N(ew) inserted (including).

6d           Elevated skill including top female accessory (5)
{TIARA} – This is a down clue so ‘elevated’ is a reversal indicator.  Take a word for skill and insert (including) the usual two letters for “top” and then reverse the lot. You’ll find an accessory worn by females on their head.  We had this in the last puzzle I blogged so I’ll use the same photo! 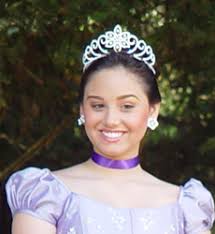 10d         Motor stops on European railway — English shortly coming aboard (6,6)
{DIESEL ENGINE} – Listen very carefully yet again . . . A motor, as in a car perhaps. Start with a word for stops or expires and follow with E(uropean) and a word for a railway track into which you have to insert (coming aboard) an abbreviation for English. Then split it all (6,6).

23d         Initially redacted original great English thesaurus (5)
{ROGET} – This is the guy who edited or produced the very first thesaurus in the English language.  He’s also the first letters (initially) of the other words in the clue.  Brilliant clue IMHO.

Too many good clues to pick out favourites apart from 23d – what do you think?