Hola from the Vega Baja, where it is ridiculously hot and sticky tonight (ask Prolixic if you don’t believe me!). Forecast 37C and 74% humidity for later today – Agosto en Espana, yuk!  Anyway, we’ve got a bit of musical chairs again this week!  Big Dave yesterday instead of Libellule and now me today.  Pommette’s in the UK again (she’s now on first-name terms with the Ryanair cabin crew that are based in Alicante) and so, having no job list to do and therefore being at a bit of a loose end,  I’m giving Gazza a well-deserved day off.  Not sure who’s doing the rest of the week but I’ll be back again for the back pager on Thursday, which will be my regular slot in the future.
Don’t know who the setter is today but I really liked this puzzle, not too difficult but enough to make you think a bit – perfect for a Tuesday (at least I think it’s Tuesday)!

9a           Seldom encountered by British, Italian cheese dish (7)
{RAREBIT} – A famous Welsh cheese dish is formed from a word for seldom or uncommon followed by B(ritish) and then IT(alian) 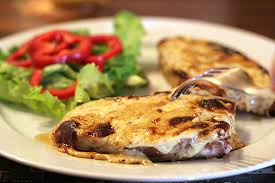 10a         Mutter curiously about piano and something to play (7)
{TRUMPET} – Take P(quietly in musical terminology) and MUTTER and make an anagram (curiously). You’ll end up with a brass musical instrument – something to play.

11a         Trooper willing to keep going (7,2)
{SOLDIER ON} – This is a phrase meaning to keep going, possibly against the odds.  It’s a trooper (think army) followed by a word which could mean willing, as in up for something.

15a         A grant secured by the Olympian (7)
{ATHLETE} – You’ve probably watched a lot of these Olympians over the last week or so!  Start with A (from the clue) and follow with THE (also from the clue). Then insert (secured by) a word meaning grant or allow. A bit topical in view of all the talk about ‘legacy’! 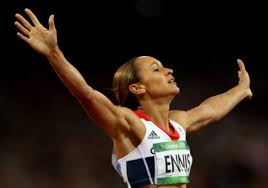 17a         Saying name of dog, perhaps held by lead (7)
{PROVERB} – A supposedly common dog’s name inserted (held by) into the chemical symbol for lead gives a saying.  Anyone ever met a dog called this? I certainly haven’t – or a FIDO either!

19a         Significance of less than wholesome wine (7)
{PURPORT} – This is a word meaning significance or importance. Start with a word for wholesome, as in unadulterated, and remove the last letter (less than). Then add crosswordland’s favourite fortified wine.  It’s my favourite fortified wine too, although I do like a bit of Manzanilla sherry!

23a         Main place for the rest of the natives? (6-3)
{OYSTER BED} –To get this one you have to know a slightly obscure meaning of the word ‘native’. I’ll give you a clue – it’s a shellfish. If you know that then the clue is easy. It’s the place in the sea (main place) where these molluscs would rest or sleep (or indeed are farmed!).

25a         In conflict with commander this month (7)
{AGAINST} – To be in conflict or in opposition is the usual Turkish commander followed by a word for ‘this month’. 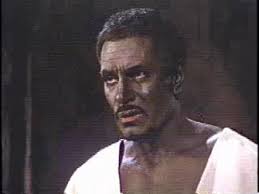 27a         Play’s hero overcome? Not he, if composed (3,4,2,6)
{THE MOOR OF VENICE} – This is another way of referring to the guy in the last clue.  It’s an anagram (composed) of OVERCOME NOT HE IF.  If you haven’t already got it, cracking this anagram will give you the answer to the last clue, and vice versa I suppose!

2d           A gem of a girl? (5)
{BERYL} – This semi-precious stone is also a girl’s name.  A well known name perhaps but I don’t remember ever meeting one!  I’ve seen this exact clue before but last time the ennumeration was (4) and the answer was RUBY, which I tried to write in this time until I spotted I was a letter short!.

4d           Hazel, for example, one who’s crazy over old actor (3-4)
{NUT TREE} – Hazel is an example of one of these. Start with a word for someone who’s crazy (3), as in a bit mad, and add the surname of an old actor and theatre manager who was noted for lavish productions of Shakespeare – if you don’t believe me have a look here http://en.wikipedia.org/wiki/Herbert_Beerbohm_Tree   Anyone ever heard of this guy or am I just showing my ignorance here?

7d           Comic-strip character, perhaps getting petrol on her overalls initially (9)
{SUPERHERO} –  This is a type of comic-strip character (think MARVEL).  It’s a word for a higher octane petrol followed by HER (from the clue) and then an O (Overalls initially).  Personally I think this clue is very unfair to any solver under the age of about 40. As far as I’m concerned the term went out of use with the introduction of star ratings followed by the change to unleaded petrol, although my first motorbike used to ‘pink’ on anything less than this! 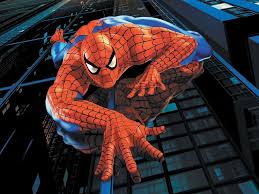 8d           Train always holding one up (7)
{RETINUE} – This is a train as in a following.  Take a poetic word for always and insert (holding) another word for one and then reverse the lot (up in a down clue).

16d         Charm of Arab, say, connected with Oxford? (9)
{HORSESHOE} – To get a lucky charm, which must always be hung the right way up, you need to start with an animal of which an arab is an example and follow with something that an Oxford is an example of. 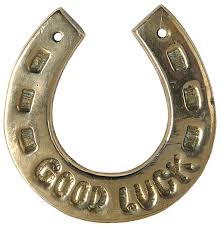 17d         Rustic worker after vegetables (7)
{PEASANT} – A rustic or country person is some spherical green vegetables followed by our favourite worker. 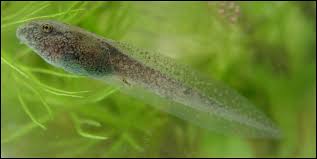 I quite liked 7d but favourites were 15a and 23a (but only because I’ve come across the native before!).