Good morning from a stormy, windswept Devon and a Happy New Year to all. Thanks to Prolixic, Gnomey and Crypticsue for doing all my blogging last week and giving me a whole week off.
We have a pretty straightforward puzzle today. Let us know what you thought.
If you want to see an answer just drag your cursor through the space between the brackets under the clue that’s giving you problems.

1a  The man’s fear of Spain (8)
{HISPANIC} – an adjective meaning relating to Spain comes from how you’d refer to something belonging to a man followed by an uncontrollable fear.

5a  Dash off short piece extremely well (6)
{SCRAWL} – this verb meaning to dash off or write in a hurried way is a small piece of something without its final P (i.e. short) followed by the outer (extremely) letters of W(el)L.

10a  Woke up before a period ended (4,2,1,4,4)
{CAME TO A FULL STOP} – the definition here is ended. A phrasal verb meaning woke up or regained consciousness is followed by A and the punctuation mark which North Americans call a period.

11a  Devious slash (7)
{OBLIQUE} – double definition (and the second punctuation mark in a row) – devious or indirect and a more formal term for a slash.

12a  Generous artist included in defamatory publication (7)
{LIBERAL} – put the abbreviation for a successful artist inside something defamatory that has been published.

13a  Vessel carrying right flag (8)
{STREAMER} – insert R(ight) inside a type of ship (or possibly a type of kitchen vessel used to cook food in a healthy way).

15a  Guiding beliefs in Soviet hospitals (5)
{ETHOS} – the distinctive character of a person or group is hidden in the clue.

18a  Comic strip character, duck, backing America (5)
{LINUS} – the name of Lucy’s little brother in the classic comic strip Peanuts comes from reversing (backing) another word for a duck (in cricket, say) followed by an abbreviation for America. I’m not sure what the surface is trying to tell us.

23a  Scuttle in small holidaymaker’s van? (7)
{SCAMPER} – a verb meaning to scuttle or move hurriedly comes from S(mall) followed by a type of large van that provides living accommodation as well as transport for holidaymakers.

27a  Handle party at last in negotiation (6)
{TREATY} – a verb meaning to deal with or handle is followed by the final letter (at last) of (part)Y.

28a  French city residence briefly shown on map (8)
{CHARTRES} – this is a city in northern France with a very famous cathedral. An abbreviation (briefly) for residence (as often seen in an estate agent’s description) follows (shown on) another word for map. 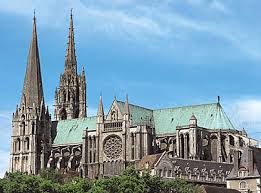 3d  Article’s quite new — not this then (7)
{ANTIQUE} – the indefinite article is followed by an anagram (new) of QUITE to make something that’s not new.

7d  Revise table, they say (5)
{ALTER} – a verb meaning to revise sounds like (they say) a sort of table found in a church.

8d  Note attached to cheek cosmetic (3,5)
{LIP GLOSS} – this is a cosmetic. An explanatory note, often written in the margin of a document to shed light on an obscure word, follows (attached to) a slang term for cheek or insolence. The word for note is most often seen these days in a phrase like ‘to put a ***** on something’ meaning to present something in a favourable light or to emphasise the good bits.

9d  Maybe Hereford mist shrouds river and pond dweller (8)
{BULLFROG} – Hereford is a definition by example of a stud animal. Follow this with a thick mist containing (shrouds) R(iver) and you have a pond dweller.

16d  Person in charge on ship is a star (9)
{HEADLINER} – the star performer, whose name is in the largest type on a programme, is a charade of the person in charge (of a school, say) and a type of passenger ship.

17d  ‘Tass’, long spreading a Gorbachev initiative (8)
{GLASNOST} – an anagram (spreading) of TASS LONG gives us one of the two Russian words that we all got to know when Mr Gorbachev was in power. This one means the practice of more open government.

19d  Drink wine got from base (7)
{SUPPORT} – this word for a base is a charade of a verb to drink and a type of fortified wine.

21d  Creeping plant in house on wheels (7)
{TRAILER} – double definition – a creeping plant and another name for a caravan.

24d  Saw a duke grow old (5)
{ADAGE} – if you see the word ‘saw’ in a clue it may refer to a cutting tool but it’s just as likely, as here, to mean a proverb or saying. String together A (from the clue), D(uke) and a verb meaning to grow old.

25d  Injures top of head in swamp (5)
{MARSH} – a verb meaning injures or impairs is followed by the top letter of H(ead).

None of the clues really stood out for me today. How about you?